A look inside Suite 81, the studio of the Barnard Visual Arts Seniors

A look inside Suite 81, the studio of the Barnard Visual Arts Seniors 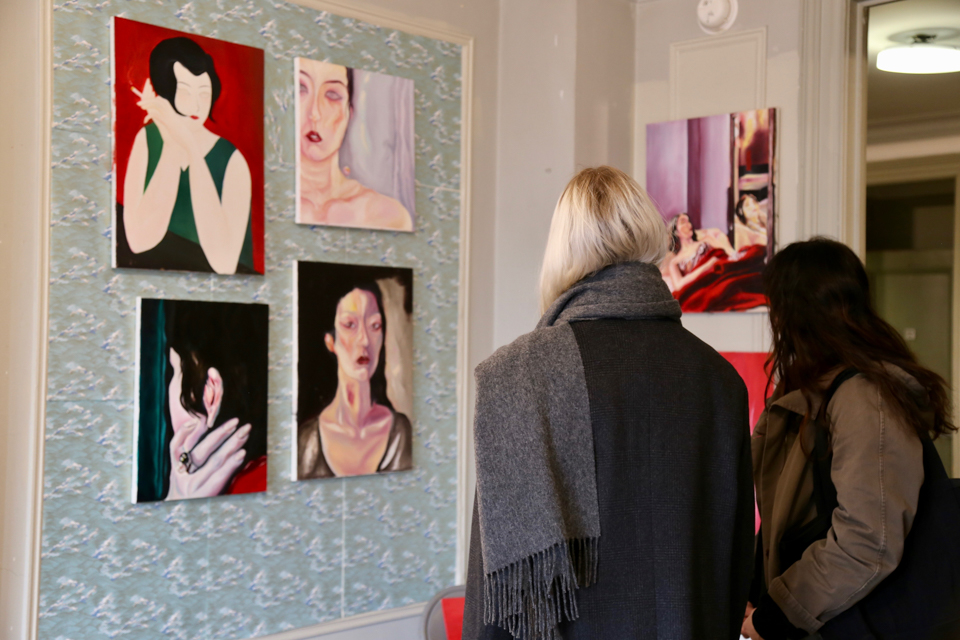 Given its residential hall layout, the studio space in Suite 81 had an intimate feel.

Suite 81 in Barnard residential hall 600 W 116th St. may look like a regular suite from the outside, but inside, no dirty dishes or textbooks can be found. Instead, Suite 81 uses its homey layout to house an art studio in which Barnard seniors majoring in art history with a visual arts concentration displayed their work this past weekend.

The Barnard Visual Arts Senior Open Studios took place on Sunday, Dec. 9. A variety of works from Barnard seniors majoring in art history and concentrating in visual arts were presented, including a range of mixed media works such as bioplastics works, photography, paintings, video, and textiles. Each student’s display included finished pieces as well as works in progress from this semester.

Given its residential hall layout, the studio space in Suite 81 had an intimate feel. For many of the student artists, the rooms where their work was displayed were the same rooms in which they had created the pieces. Each exhibition space was uniquely decorated by the artists to compliment their displays. Viewers made their way throughout the suite, admiring artworks which did not come with descriptions, naturally inviting conversation with the artists who were present at the showing.

Upon entering the living room, viewers could glance upon the work of Chloe Carberry, BC ’19, which hung from the ceiling in the room across the way. Inside that room, visitors could walk through her numerous silkscreened blankets which hung from the ceiling and created a space that enveloped the beholder. Carberry created most of her pieces at the LeRoy Neiman Center for Print Studies, deciding this semester to print primarily on moving blankets.

In the adjacent room, Suyi Xu, BC ’19, showcased warm-toned paintings against the backdrop of patterned wallpaper. Her work consisted mostly of portraiture, with the color red playing an important part in her artistic vision. Xu noted that before she started painting she used to hoard red lipstick and that her focus on red in her work has been a shift from one obsession to the next.

“I feel like painting is the most effective and cathartic way for me express my emotions,” Xu said. “Red is always a color that is very attractive to me, and people tell me is it because I’m Chinese. And maybe it is, but I think it’s the most important color for me.”

Down the hallway, one of the more experimental bodies of work on display was that of Tesla Teed, BC ’19, who explored starch-based bioplastics, a sustainable alternative to traditional plastic. Teed made all of the bioplastics from scratch by creating a mixture using a starch base of potato, milk, arrowroot, or tapioca starch, as well as other ingredients that she then boiled to create the bioplastics she displayed. Teed noted the difference in the texture and pliability of the bioplastics as a result of the different bases she used.

Exhibited in another room was the work of Chloe Slazas, BC ’19, whose digital photography was intended to address our generation’s obsession with plastic surgery. Her work portrayed women’s faces smeared with lipstick and bandaged next to syringes, as well as a woman’s torso wrapped with a measuring tape.

“There’s some sort of humor in all of [the pieces]. [They’re] a critique on the fashion and beauty industry,” Slazas said. “Our generation has become obsessed with perfection.”

Another room held the photography and mixed media work of Julia Girardoni, BC ’19. Her work involves textiles, digital photography exclusively taken with an iPhone, and silkscreen printing. Giardoni turns her photos into patterns that she prints onto silk as well as patches that she sews onto sweaters.

“I’ve been obsessed with screenshots and the concept of a camera roll and the lack of physical materiality of those things,” Girardoni said. “I think the way people photograph today is so different from the history of photography, because people take so many of the same picture.”

Next to Girardoni’s work was the photography of Caroline Wallis, BC ’19, which covered an entire wall with large prints of images from her road trips through small towns all across America.

“I’m from New York, so I didn’t really have a clear image of what America looked like until I had been out there,” Wallis said. “[I’ve] been doing this research about the history of the towns, the etymology, who has lived there historically, like the Native American nations that lived there before white settler colonialism, and any interesting factoids about the town.”

By exploring the historical contexts of photographed locations, Wallis’ work interrogates the evolution of places through time. Below each image displayed was a card with the photograph and a history of the town printed on the back, recognizing those who lived there in the past and what the town has become since. Wallis hopes that her work can inspire students to consider the historical implications of land occupation across the country.

“I’m interested in education through art,” Wallis said. “A primary objective of art is to better people. That's why we say art is such an important thing for humans, because it betters us. Education can be one part of that.”