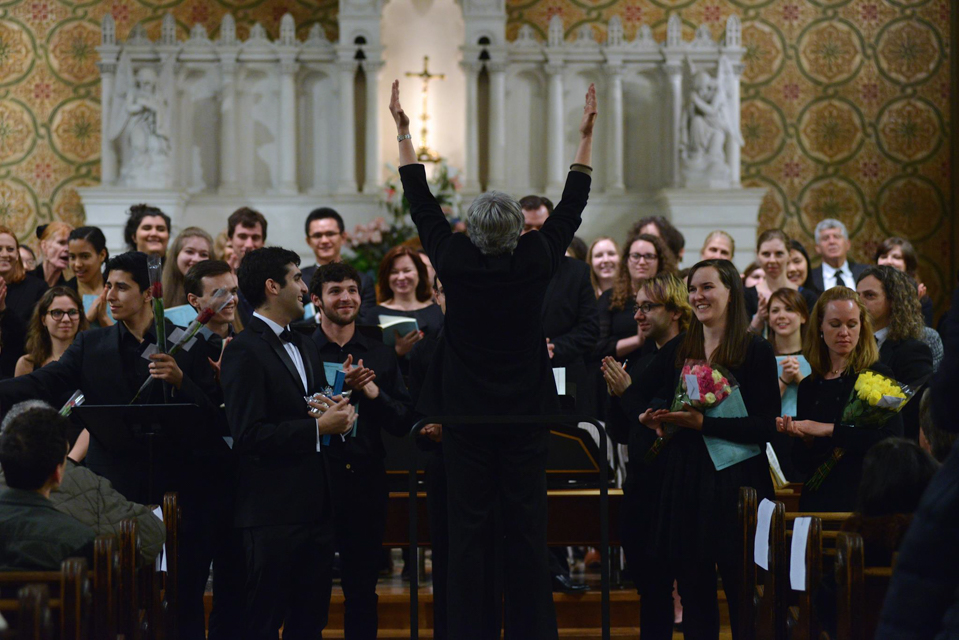 The Barnard-Columbia Chorus and Chamber Choir, pictured here in 2015, performed their annual Holiday Choral Concert this past Saturday night.

Beneath the stained glass windows of the Church of the Ascension, the Barnard-Columbia Chorus and Chamber Choir filled the nave with the melodies of Igor Fyodorovich Stravinsky and Johann Sebastian Bach during the group’s annual Holiday Choral Concert on Saturday night. Over 75 students and alumni from across the University came together under the direction of Barnard music professor Gail Archer for the end-of-semester performance and reception.

BCCU is open to students, faculty, and alumni with any affiliation to the University. The requirements for members, according to Archer, are that they audition, can read music, and sing at pitch. Chorus members rehearse twice a week throughout the semester to deliver concerts that showcase a range of musical genres.

“I’m always looking to juxtapose music of different historical periods,” Archer said. “So when students are in choir for four years they have sung a wide range of the choral repertoire. The exposure is intense. My aim is to give students as broad a music experience while they’re here as I possibly can.”

The concert began with a selection by Stravinsky, starting with “Pater Noster,” “Ave Maria,” and “Credo,” before the “Symphony of Psalms,” which was split into three parts. Stravinsky’s pieces were punctured by distinct solo moments by the orchestra, which was comprised of musicians unaffiliated with the University.

“[The] three shorter Stravinsky pieces [“Pater Noster,” “Ave Maria,” and “Credo”] were a sort of prelude to get the audience attuned to Stravinsky’s language,” Archer explained.

The chorus tackled challenging moments in “Symphony of Psalms” with eloquence, delivering a harmonious finale of Psalms 38, 39, and 150. The piece was accompanied by the pronounced contributions of the band’s woodwind instruments, among others.

After a brief intermission, the ensemble tackled Bach’s “Magnificat in D Major,” a performance split into 12 parts and noteworthy for the contributions of soloists. Gabrielle Ferrari, GSAS ’22, delivered an exceptionally moving solo during part three of the piece, entitled “Quia Respexit.” Ferrari’s masterful execution, along with her striking red gown—in contrast to the black garments worn by the rest of the ensemble—made it a particularly memorable highlight.

When asked whether there are challenges in bringing together such a diverse group of students, Archer answered, “Not at all. The commitment of the group is so wonderful. We are like a large extended family; there’s a lot of community in the choir. There’s also diversity; people of every possible background, faith tradition, language—we have dozens of languages—and we love that about it. What brings us together is our love of singing.”