Behind the scenes of Barnard Bacchantae’s first music video

Behind the scenes of Barnard Bacchantae’s first music video 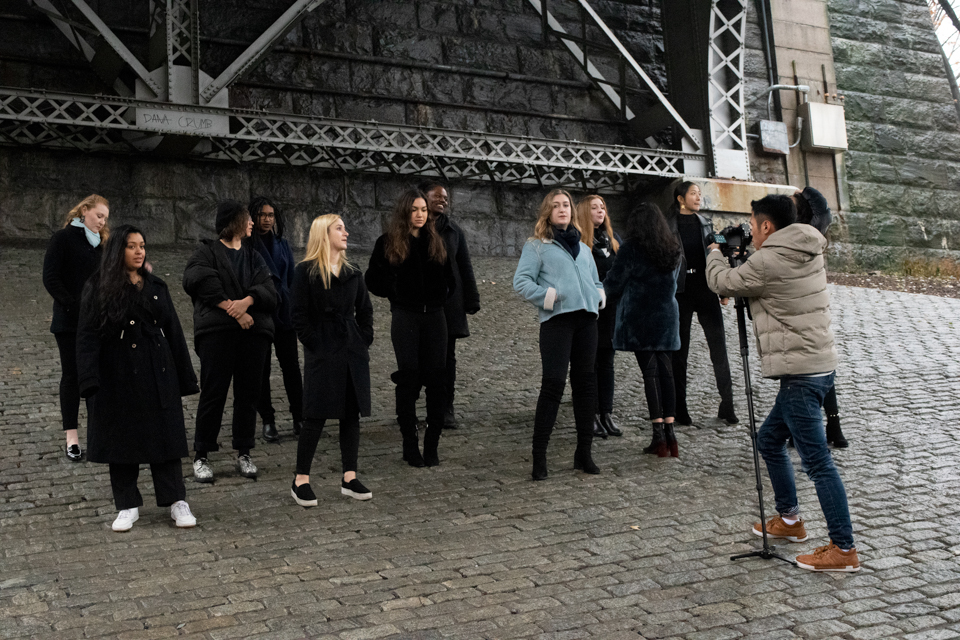 Bacchantae's music video featured the group performing in a variety of locations.

Barnard Bacchantae released their first-ever music video on Tuesday, a mash-up of “Pretty Hurts” by Beyoncé and “Stay” by Rihanna, the final product of a year of planning, fundraising, and recording.

Bacchantae is an all-female a cappella group that holds the distinction of being the College’s only a cappella group. The group performs a variety of music from pop to R&B.

This was a long-term project for the group—having been envisioned since the release of Bacchantae’s first album in April 2018. The video features lead soloists Eva Mullineaux, BC ’20, and Elise Blackburn, GS ’19, accompanied by the rest of the group singing under bridges and on cobblestone streets.

The mashup was selected through both a member voting process and an executive board decision.

“[The executive board] picked the ones that we thought would be good from a business standpoint, which three or four songs we thought could realistically be turned into a music video and then Bacchantae voted between their top two,” Bacchantae President Anna Fondiller, BC ’19, said.

The mashup—which was arranged by Mullineaux, who is also the group’s music director—said the inspiration for the arrangement came when she was living abroad in London.

“I was by myself there, listening to music, and these songs came on next to each other and I had this image in my head of a soloist, singing ‘All along it was a fever,’” Mullineaux said, in reference to lyrics from Rihanna’s from ‘Stay.’ “I looked up the chords for both songs and played the piano for awhile, trying to figure out how it fits together … I ended up having the chords of Pretty Hurts and Stay on top of that.”

Once the song choice was settled, the group set out to record it. Fundraising proved somewhat difficult for the group, in part due to a short time frame and administrative hurdles.

“We're the only Barnard a cappella group, and Barnard Student Life is very different from Columbia’s, so all these other groups that have done music videos had a very different process than we did, and we kind of had to figure it out on our own,” Fondiller said.

Once enough money had been raised, Bacchantae made the decision to work with a professional audio recorder. The day-long process was cut into segments for each member as multiple layers of recordings were used for each voice part. With the help of the recording studio, these vocal layers were pasted together into the final cut of the mashup.

From there, every phrase in the songs was paired with a corresponding time stamp in the music video and attributed to each member an assiduous excel process. This work was done by Fondiller and the executive board, with help from their hired videographer Kevin Chiu, SEAS ’17.

“It was very physically taxing,” Fondiller said, “In a cappella, you just stand there and sing, but it’s really difficult to keep your energy level up and connect to something when there are all these cars, and a rat walks by.”

Even despite the surprise rat appearance, the group enjoyed the overall process.