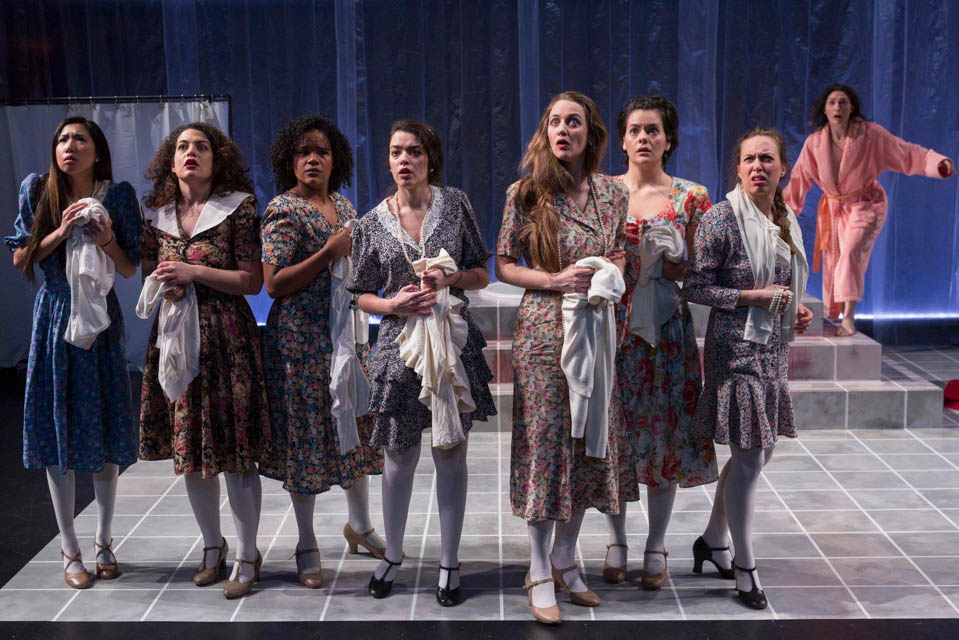 Director Miriam Grill set her contemporary take on Medea in a bathroom.

When one has a horrible day or goes through a breakup, where does one go to cry unrelentingly? Most likely to the bathroom, just as the titular character in Miriam Grill’s thesis production of “Medea” did.

Only a bathtub with pale white curtains, along with a gray tiled floor, set the stage for Grill’s enthralling contemporary take on “Medea,” the classic Greek play written by Euripides and translated by Michael Collier and Georgia Machemer. The international director and junior MFA student’s directing thesis ran from January 23-26 at the Flexible Performance Space at Lenfest Center for the Arts.

In an interview with Spectator, Grill talked about how the myth that inspired Euripides’ renowned tragedy inspired her to use a bathroom as the sole setting for the play.

According to the myth, Medea helps her husband Jason attain the Golden Fleece, a symbol of authority, by betraying her own family. After completing his mission, Jason returns to Corinth with Medea but soon abandons her and their two children to marry the princess of Corinth, the daughter of Creon.

“[Medea’s] part of the story is that she not only left her family for Jason, but she also betrayed [them],” Grill said. “She chopped up her brother into little pieces and put him into the ocean so that her dad's navy would stop chasing her. And I thought to myself, ‘If I was Medea, I'd probably be thinking a lot about my brother, and I'd probably be thinking a lot about the ship that we got on and the ocean.’ And part of the first vision for this was lots of ocean and sailing, and then it all kind of [led to] the bathroom.”

By using this intimate space as the setting of the play, Grill allowed the audience to view Medea in a more humane light without mitigating the foulness of her vengeance. Yes, Medea is ruthless and Machiavellian, but she’s also raw and vulnerable, seeking justice in a world that is all but fair to a woman like her: an outsider, or “barbarian,” who is too “clever” for her own good.

When casting the play, Grill recognized that this struggle—of being oppressed and alienated for being a foreigner—is one that many international artists face nowadays, so she decided to look for actors born outside of the United States or whose families come from other countries.

“I think theater is a double vision. I think you see the story, but you also see the actors,” Grill said. “And I think it's really powerful when something is true and can't be faked. [The audience] is watching a bunch of people who have moved from a different country come here to the U.S., and [the actors] are putting on a play about outsiders and insiders.”

Grill’s international cast included Australian actress Carla Kissane as Medea, who offered an electrifying performance of a woman that Grill described as being “so bold, so strong, and so incredible,” yet so “complicated.”

The diverse ensemble also comprised of Jon Haslam as Jason, Barbara Thomas as the Nurse, Sam Muniz as Creon, John D. Haggerty as the helpless king of Athens Aegeus, Felipe Joglar as the Tutor, and Lily Randall as the Messenger.

Unexpectedly, there were many moments in which actors spoke in different languages, implicitly sharing a part of their own experiences throughout the play.

“Almost everyone in this cast, including the two little boys, [Jayden Toledo and Gabriel Gurevich, who played Medea’s sons] is bilingual,” Grill said. “So it’s something I think they carry in their bodies, this story."

In another one of Grill’s innovative spins on Euripides’ play, the chorus was comprised of actresses hailing from Germany, Japan, the Dominican Republic, and many other countries, but these women of Corinth were all dressed in typical 1950s fashion. With their dainty dresses, pearl collars, and delicate sweaters, they first appeared onstage accompanied by the 1954 classic “Mr. Sandman.” And, although representative of the ideal woman—submissive, loyal, and motherly—when juxtaposed with Medea, the chorus seemed empowered and liberated.

In fact, when Medea finally decides to carry out her murderous plan after being granted one more day before being exiled, she celebrates by drinking a shot of Jose Cuervo, and the women of Corinth take turns drinking from the bottle and proceed to free themselves by untying their hair and unbuttoning their sweaters. The chorus, despite their appearance, often spectacularly went against rigid social norms and gender expectations, much like Medea.

Miriam Grill’s “Medea” amazingly brought together a talented cast and crew that transformed the play into a surreal experience. Her subversive and ingenious production invited the audience to consider the main character as not just evil, a woman whose “nature is to cry”; instead, Grill encouraged viewers to recognize how much more complex Medea is. She’s a woman who, just like anyone else, deserves to take a long, cathartic bath, belt out the 2012 hit song by Icona Pop, “I Love It,” and blurt out swear words at an “oath breaker” if she wishes to do so.