Erica Baum, BC ’84, recounts her journey to the walls of the Guggenheim

Erica Baum, BC ’84, recounts her journey to the walls of the Guggenheim 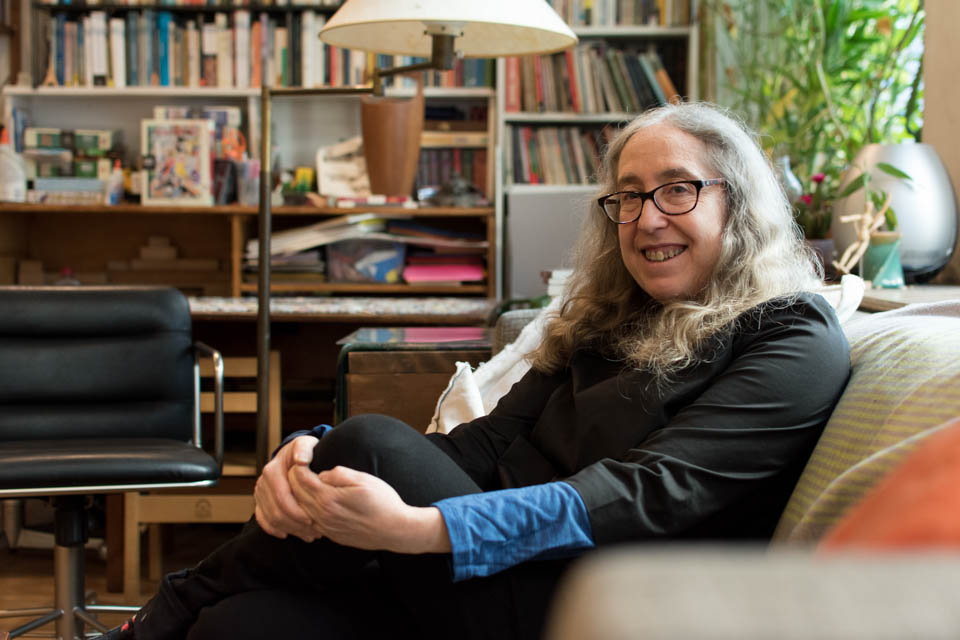 Artist Erica Baum, Barnard '84, focuses on the intersection between poetry and photography through close-range images of language and texts in her work.

Sitting atop the used mid-century style chair in the corner of her sitting room, Erica Baum, BC ’84, recounted how she went from her liberal arts education at Barnard to donning the walls of the Guggenheim with her artwork.

Baum, who was born and raised in New York City, created art from a young age. As a child, she took classes at the Museum of Modern Art and continued to develop her artistic career surrounded by artists such as Jean-Michel Basquiat and Zoe Leonard, her peers at City-As-School High School.

Today, her work is exhibited internationally and housed at the Guggenheim Museum, among other established institutions. Baum focuses on the intersection between poetry and photography through close-range images of language and texts. She currently has a show called “A Long Dress” at Bureau, a gallery in the lower east side of Manhattan, until February 17.

During her time at Barnard, Baum found that her interests and the broad course list that was available to her allowed her to explore many different disciplines.

“When I was at Barnard, I took art history,” Baum said. “I took arts of India, I took poetry:Chinese and Japanese and Korean poetry in translation. I took a lot of Japanese literature classes. One of the things I loved about Barnard was that you could take classes at Columbia in these very obscure things.”

After graduating Barnard, Baum’s life as an artist unfolded, as she first worked at jobs in the city. She earned her M.A. in linguistics at Hunter College in 1988 and her MFA in photography from Yale University in 1994. Working at various nonprofits, Baum found inspiration through the female artists she began to meet.

“When I graduated, I worked for a nonprofit called CITYarts that did murals [and] gave grants to artists. I saw all these artists who actually, in retrospect, I've come to realize were mostly women. I think the fact [that] they were women made them role models, but I don't think I was really conscious of that,” Baum said.

A study of student life that Baum personally conducted at Yale resulted in a notable project called Blackboards. She photographed erased or partially-erased blackboards with a wide-view camera. This project then expanded into a search for moments of language in the world, such as the etchings on student desks. Through an exploration of the textures and erasings of the world around her, Blackboards as a collection began to form.

“I got more interested in the trappings of student life, and things like the desktops and what people carved into desktops and blackboards, and what was left on the board,” Baum said.

Photography became Baum’s primary medium while at Yale. Beyond Blackboards, she began the Naked Eye series (2008-present) in which she photographs pages of books in different positions at close range. When asked about her narrative as a photographer throughout these different series, she emphasized the importance of voice.

“I think it's always an issue for photography. I think the questions for a photographer—if you're trying to pursue it as an art—you're always trying to find your voice, and there's always this question of subject matter versus approach, and your voice in that,” Baum said.

Baum added that all young artists everywhere should be taking time with work.

When discussing the future for artists to come, Baum addressed the challenges that artists face today due to the overwhelming presence of media. Given her work is grounded in the written word and found language, she implicitly works in conflict with mass media.

“Even though there's this ubiquity of imagery and accessibility, I think the challenge for the individual is still the same. It's always been hard,” Baum said. “It is a strange moment though, we are sort of all drowning in images.”