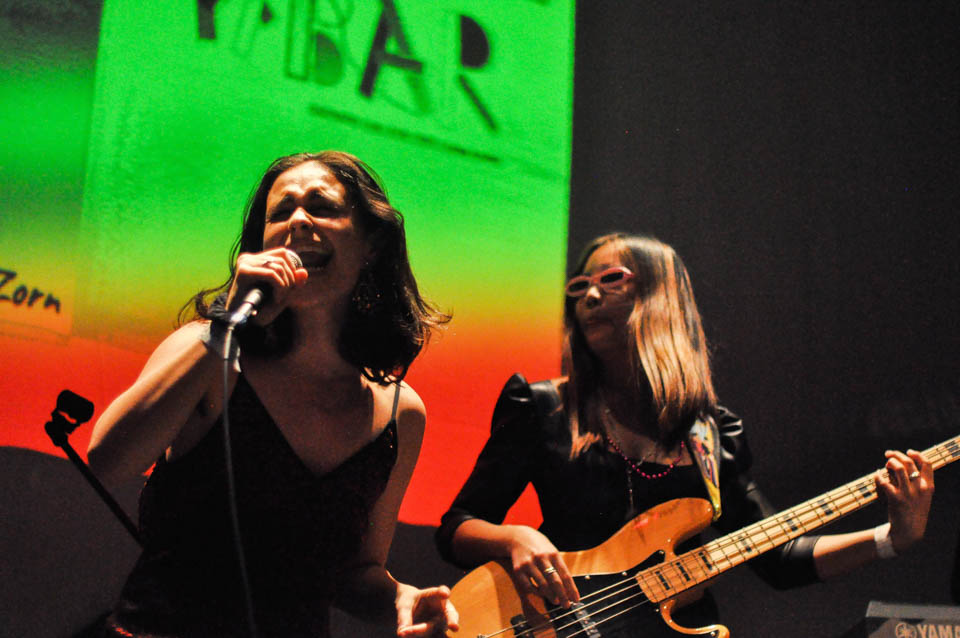 Everyone that turned out for WBAR’s first event of the semester found something new, original, and inspiring to groove along to.

Forget ball-drops, forget rain and frozen ponchos, Monday night’s concert at Glicker-Milstein theater surpassed any 2019 New Year’s Eve party you might have been stuck with—and was only a month late in doing so.

The show, presented by WBAR, RATROCK magazine, and Barnard Student Life, featured musical performances from across the genre-spectrum. From Caribbean-inspired mashup DJs, to genre-nondescript postmodernist-influenced rock groups, everyone that turned out for WBAR’s first event of the semester found something new, original, and inspiring to groove along to.

“Every performer was so amazingly talented and it was awesome to have such good feedback from the audience,” WBAR’s event director Klea Kalia, BC ’19, said.

The event’s opener, CHKY (pronounced ‘cheeky’), started off the night with a mix of genre-defying melodies that infused jazz roots with a poignant blend of grungy synth noise-rock. The band frequently looked to their keyboardist Kat Pompermayer, BC ’22, to inject sweeping synth solos that resonate over the band’s varied harmonies.

The group consists of an all-Columbia ensemble including Kat Pompermayer on keyboard, Michel Vazirani, CC ’21, on lead guitar, vocals from Pagona Kytzidis, BC ’21, Colby Lamson-Gordon, BC ’21, on bass, and Elizabeth Bailey, BC ‘22, on drums. Two members of the group found their way together from their roots in Seattle’s jazz music scene to play here at Columbia. Their experimental style captivated the party hat clad concert goers at Glicker-Milstein on Monday night and met raucous approval before the end of each piece.

“On stage, there are definitely those moments when you find things that you want to improve but it’s so good to have that support from the audience to help you try new things out,” Vazirani said.

The second opener, an enchanted Columbia DJ whose powerful vocals and silky stage presence connected with the audience through R&B in a way few other performers could, presented a marked shift in style for the audience. Vanessa Chadehumbe, CC ’19, who goes by the stage name Bay B. Bop, pushed her own boundaries by trying to draw out the dormant dancer inside every member of the audience.

“I’m used to performing a lot more with my friends, but tonight I tried to use more bops and energetic tracks—trying them out, testing those out, seeing what it feels like to perform that sort of thing. That was new for me,” Chadehumbe said.

In an interview after the show, Vanessa’s manager, Tyler Allen, SEAS ’17, noted the kind of musical growth that few audience members see from the crowd, but one that every aspiring musician can relate to.

“I remember when we first started, Vanessa demanded ‘I will not be singing, I will only be writing,’ and I think the most fun thing about the entire process has been watching everyone grow to where we are now,” Allen said.

The first headliner of the night took the stage to an impassioned but slightly dwindling audience. Of the 60 students who initially packed the venue, twenty or so remained as the show pushed past 11 p.m.

Those who stayed were treated to the transcendent music of New Brunswick-based, eclectic-rock group Longbeard. The veteran New Jersey musicians paired the soft vocals of their lead singer, Leslie Bear, with the looping harmonies of lead guitarist Tom Christie and bassist Jaime Knoth. Their music resonated of soothing postmodernist melodies that entranced the remaining audience and echoed across the vaulted walls of Glicker-Milstein’s black-box theater. The intimidating size of their lead guitarist’s pedalboard was enough to convey the group’s prowess in developing powerful and layered music.

The final headliner, a DJ and drummer duo who go by the stage names D’Flower and Ignabu, presented the most diverse departure from traditional pop music with an exceptional array of Haitian-inspired dance bangers and unconventional injections of gospel, jazz, and modern elements. Their set, the only set paired with a hyper-saturated, technicolor music video, was a jolt to the conventions of the music industry. As a final nod to these artists’ exceptional talent, D’Flower ended their lineup with a shockingly complex flute solo that she managed to handle while switching pre-recorded inputs on her mixing table. Ron Burgundy would have been stunned.

Those that remained lingered at the venue eager to congratulate the musicians and to help breaking down an event that had delivered on so many levels musically. WBAR assistant director of the event Xana Pierone, BC ’20, summed up the night well.

“Quality over quantity. That’s what we were going for tonight,” Pierone said.