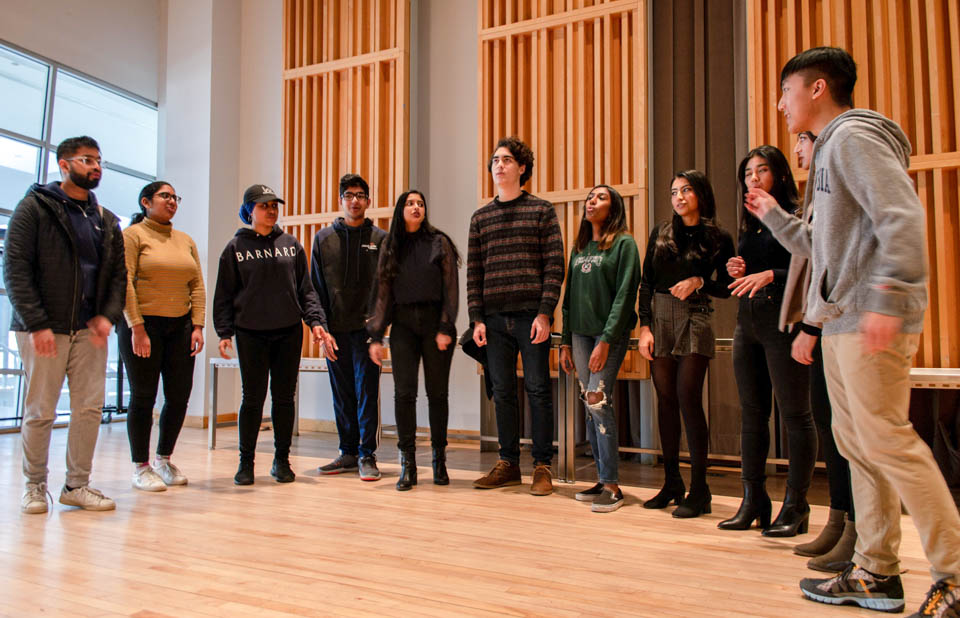 In a cappella group Columbia Sur, songs from different continents are knit together as tightly as the group singing them.

In the cozy echo chamber of Lerner 573, the mellow groove of Khalid and Normani’s “Love Lies” slips into a less familiar but immediately infectious tune, later identified as “High On Love” by Indian-American R&B singer Sid Sriram. As Columbia’s South Asian fusion a cappella group, Columbia Sur performs music that bridges the South Asian and American identities of its members.

Songs from different continents are knit together as tightly as the group singing them. The group’s president Shreya Sunderram, BC ’19, explained that members of the group bond over their shared cultural experiences.

“A lot of a cappella groups are like a family, but what makes Sur unique is that we have that cultural understanding,” Sunderram said. “At times we may not feel American enough or Indian enough, but it’s nice to have a community of Indian-Americans who are also in that intersection.”

At a university often criticized for its lack of community, stress culture, apathetic alumni, and marginalization of non-Western voices, Sur defies all of these expectations.

Although Sur is not an exclusively Indian-American group, it’s a community that celebrates South Asian culture and a platform that gives voice to South Asian perspectives. The group also aspires to reach a diverse audience. At last year’s Perspectives on Diversity weekend for admitted students, Sur sang in front of not only Indian-American students, but also a broader audience of students of color.

“We performed ‘Despacito’ along with a Hindi song, and the reaction of the crowd was amazing. To see Latinx students along with Indian students and other people of color just freak out and really enjoy our music shows the power of how universal music can be,” Sunderram said.

Making music that fuses cultures and languages is no easy feat. Sur’s members write all of their own arrangements. When they make a mash-up, writing the music for the American half of the song is a pretty straightforward task: A quick Google search yields sheet music and chord progressions that the arranger can use as a starting point to build melodies, harmonies, and rhythms. A Google search for a South Asian song, however, often doesn’t cough up more than a recording. The group has to listen, transcribe, and arrange its South Asian music from scratch.

That’s a challenge, but it’s also an opportunity for Sur members to collaborate and hone their arranging skills. New members are often paired with senior members who mentor them and show them the ropes of arranging music. As the collaborative environment suggests, Sur has no interest in a cutthroat culture.

“We’re a group that prides itself on not taking ourselves too seriously. I think there are funny stereotypes about college a cappella people being really intense about a cappella. We’re not one of those groups,” Sunderram said with a laugh.

Other members of the group agreed and emphasized that singing with the group helps them actively de-stress by taking time out of their day to reflect.

“Maybe a very Music Hum thing to say, but a lot of the time during the day, we don't really do active listening. We just absorb these sounds, and we don't pay much attention to them, especially since we’re in the city. But when you're in Lerner 573 and the acoustics are pretty great, you can listen to all the different harmonies and melodies, and it's really wonderful to have that experience,” Alec Zhang, SEAS ’20, said.

As a testament to Sur’s impact on its members’ experiences at Columbia and their lives after graduation, Sur has established a tradition of alumni loyalty—despite the fact that Sur is a relatively young a cappella group, founded only 10 years ago.

“One of my favorite things about this group is that it’s really close to the alumni. At our concert in November, we got a ton of alumni to come, who graduated not just last year, but several years ago. I felt like I was part of the family,” Peter Gado, CC ’22, said.

Current members are hoping to see plenty of alumni in the crowd at Zabardast, an annual South Asian a cappella showcase. Sur invites collegiate South Asian a cappella groups from around the country to take the stage at Columbia, share their repertoires, and riff off each other. This April marks the fifth anniversary of Zabardast, and Sur members are eagerly planning for the benchmark performance. As a four-year veteran, Roshan Bhaskar, CC ’19, has witnessed Zabardast’s growth over the past few years.

“We're hoping to invite back a bunch of alums to see what they started,” Bhaskar said.