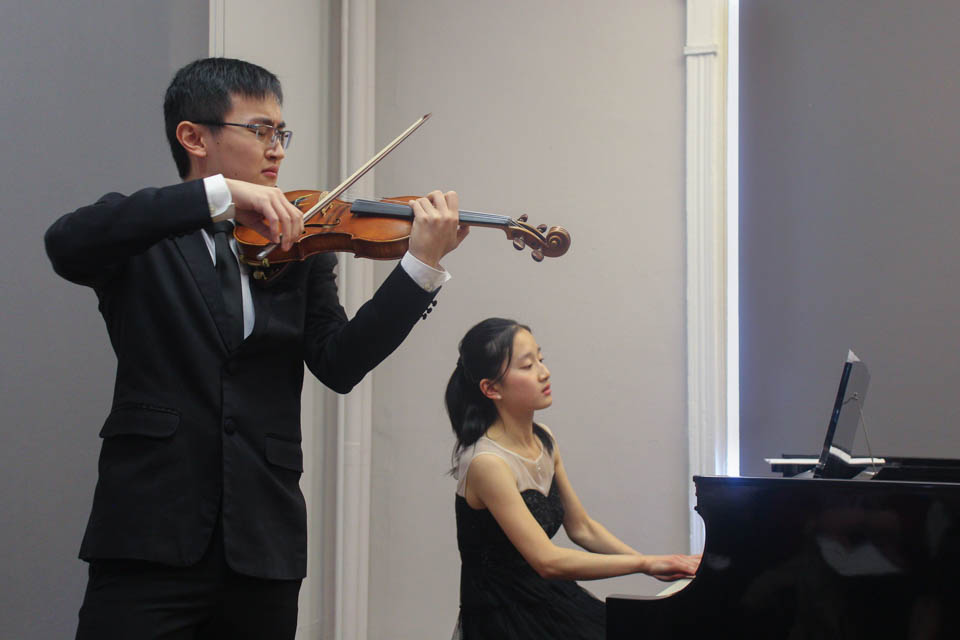 Columbia-Juilliard student musicians stood on equal footing with their audience in the intimate chamber of the Maison Francaise.

As Ivy League students and first-rate musicians, the students of the Columbia-Juilliard Exchange are formidable double threats, but they do not aim to intimidate. In the intimate chamber of the Maison Francaise, where there is no stage, they stood on even footing with their audience. They introduced themselves with friendly waves and chatted about each piece of music before performing it, creating a concert that felt like a conversation.

Hosted on Feb. 8, the concert was presented as part of the Music Performance Program by the Maison Francaise and the department of music. The lineup featured six students of the Columbia-Juilliard Exchange, which allows a select group of Columbia College students to learn from Juilliard faculty, participate in chamber music, enter music competitions, and apply early for graduate study at The Juilliard School.

The first performer, violinist Erika Hubbard, CC ’21, set a precedent for making music accessible to the audience. She prefaced her performance of Bach’s Violin Sonata in C major with broken-down definitions of the musical terms “adagio,” which means “in slow tempo,” and “fugue,” which refers to a piece of music in which a melody is introduced and then riffed off. This introduction helped contextualize Hubbard’s performance and provided a richer listening experience.

Other performers followed suit, most notably Ria Honda, CC ’22, who performed Bach’s Violin Partita in D minor and Paganini’s Caprice Op. 1, No. 9. Honda told the audience to picture a “stately German dance” when listening to the “Allemande” section of Bach’s piece and to listen for the echoes of flutes and horns in Paganini’s virtuosic jaunt for the violin. Although it was not noted on the program, Honda said the Paganini piece is commonly known as “The Hunt,” which sparked listeners’ imaginations as they interpreted the instrumental music.

The stories of each piece of music also played across the faces of the performers. Angela Yu, CC ’22, punctuated her performance of Chopin’s Nocturne, Op. 55, No. 1 with a raised eyebrow, a self-assuring nod, and a weighty pause while she closed her eyes. Jason Vassiliou, CC ’21, was intensely connected to his violin, his face reflecting the music of Brahms’ Violin Sonata, No. 3 as if it was produced by his own voice.

Vocalist Sarah Fleiss, CC ’21, was the only performer on the program whose instrument was her voice and whose song included lyrics. The built-in story of her piece was, by no means, a crutch for her performance. Fleiss is an actress: During the piano introduction of the piece, her face came to life, even before she started singing, as she told the story of a woman who falls in love and swears to win over the object of her affection. Rossini’s “Una voce poco fa” from Il Barbiere di Siviglia renders the story in Italian, but Fleiss’ evocative performance transcended the limits of language.

Fleiss stood out for imbuing her song with humor, comically tumbling down love’s rabbit hole and navigating mood swings for a humorous effect. Other moments of particular levity were Jason Wang, CC ’22, and Yu’s piano duets from Gershwin’s opera Porgy and Bess. Wang’s soaring violin, backed by Yu’s pensive piano, told a delightful love story in “Bess, You Is My Woman Now.” Before launching into “It Ain’t Necessarily So,” Wang introduced the piece as an “absolutely nasty and dirty and seductive” romp about why the character Sportin’ Life “just can’t take life too seriously.” However, no introduction could prepare the audience for the musical joyride that followed. As the audience applauded, Yu and Wang grinned and high-fived.

If this concert was at all representative of the Columbia-Juilliard Exchange, then the program evidently nurtures serious student musicians with a sense of fun—double threats who set out to connect with their community through concerts and conversations.

Editor’s note: Ria Honda is a new training staffer in the Spectrum section at Spectator, but was not a member of Spectator at the time of the concert.