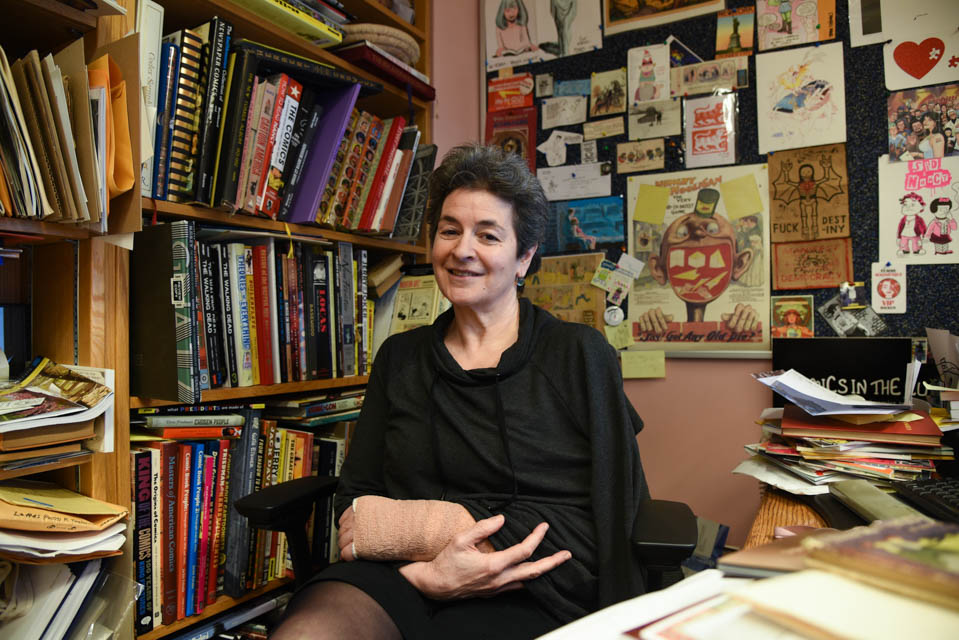 The Columbia curator for comics and cartoons is a position that was founded in 2016, made specifically for Green.

Walking into Karen Green’s Butler Library office feels like walking into the comic book equivalent of the cabinet of curiosities, with comics and cartoons abound.

The Columbia curator for comics and cartoons is a position that was founded in 2016, made specifically for Green, who was previously Butler’s librarian of ancient and medieval studies. Green’s maximalist passion for comics has led Columbia to accumulate a collection of over 10,000 comic and cartoon titles in more than 12 different languages.

While sitting in Butler’s Rare Book and Manuscript Library, the so-called “pink palace”, Green explained how, for her, medieval art connects to comics. In works such as tapestries and cathedral windows, Green sees the overwhelming parallels to comics. Green, who was born in Michigan and raised in Fort Lee, New Jersey, both read comic strips in the New Yorker and Archie Comics, and discovered her passion for medieval studies at a young age.

“I'd been a fan of medieval art ever since I was about ten years old, when my parents first took me to the Cloisters, uptown, which is where I used to cut class in high school,” Green said.

After working as a bartender for 15 years, Green received her bachelor’s from NYU in medieval and Renaissance studies. She then found her way to Columbia and received her M.A. and M.Phil. in medieval history, and subsequently received her Master of Library and Information Science from Rutgers University.

Green pitched the idea of a Columbia comics and cartoons collection in 2005. Her background in medieval studies combined with her comic enthusiasm gave her the exact platform she needed to kickstart the University’s collection. Her argument included appeals to three primary areas of scholarship.

“One was the growing critical and academic acceptance of comics. The second … we have a film school and a film studies program. The third … Columbia's full name is Columbia University in the City of New York, and comics in America were born in New York. Those three arguments worked,” Green said.

Currently, the expanding collection is strengthening the library’s overall circulation and repository of rare books, specifically those about New York City history and publishing history. Green is currently acquiring titles in women’s studies, and her current work in circulation and in rare books has significantly contributed to the University’s academic endeavors, despite Green’s early hesitation.

Green specified that there are comics-centered courses in the English, comparative literature, French, Italian, East Asian, and anthropology departments, and that many faculty members are themselves comic artists. Green attested to the intersectionality of the comic art form, as she has personally experienced this intersection between comics and medieval history.

“The appeal of visual narratives was already there for me, whether it was in books of hours or stained glass windows or sculptural programs in cathedrals and comics,” Green said.

In regard to the most important pieces in the ever-growing collection, Green struggled to name just a few, bouncing from Kitchen Sink Press references to early Stan Lee pamphlets, eventually remarking that the best of the collection was always the next thing.

“The gem of the collection is whatever I'm picking up next,” Green said.

However, the process of adding to the collection of comics and cartoons has become considerably more difficult in recent years for Green. While collections often come in the form of donated collections or archives, due to industry limitations, it is a challenge to gather all of the works Green would like to acquire.

Nonetheless, she has a full understanding of the struggles of the comic artist. There is increased pressure nowadays for artists to sell their work rather than donate it because there is more money to be made given the current booming of the comics industry, something Green has said that she understands.

“How can I fault somebody in comics? Comics doesn't make anybody rich. It's very difficult to fault somebody who's barely getting by when they have an opportunity to monetise their collection,” Green said.

When asked if she had ever considered creating comics, she laughed: “I have no artistic talent whatsoever. None. Zippo. I'm just a very very lucky fan.”

Green has an overwhelming love for her work and the comics that she is surrounded by. “I think the things that we love in life are often, in ways that we don't always even detect, interdependent on each other,” she said. “There's a common thread that appears to us in all of them. I've never questioned that comic art was always art.”

Correction: This article previously misstated Karen Green’s place of birth and hometown, as well as her Master’s degree. Spectator regrets these errors.