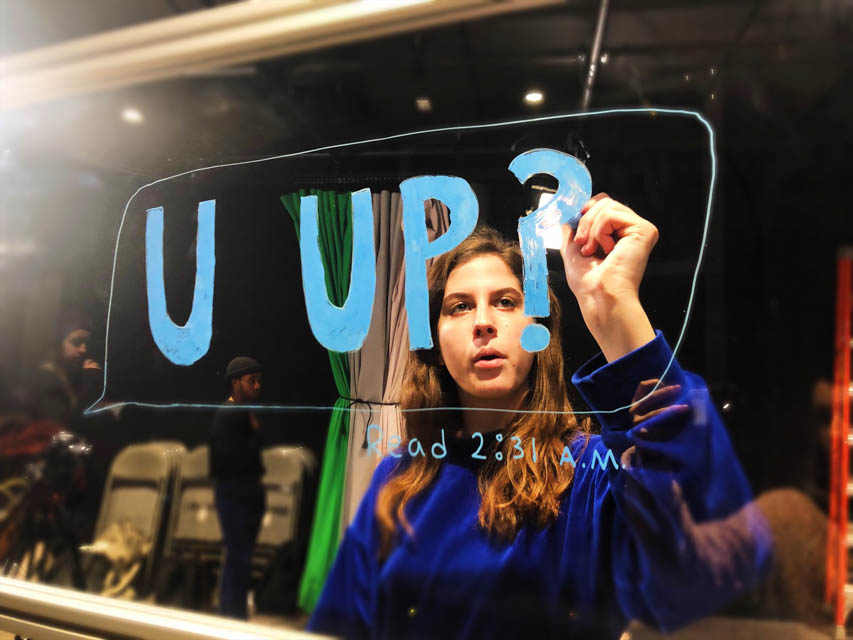 CU Tonight is the monthly late-night comedy special that undergraduate students from Barnard to SEAS didn’t know they needed.

Columbia finally did it. After years of sitting on the sidelines in a city where late-night talk shows litter the Midtown landscape, the undergraduate community produced a late-night television show of its own, one determined to fill in the gaps of campus gossip and throw some much needed shade at Columbia in ways that are equally blatant and refreshing. CU Tonight is the monthly late-night comedy special that undergraduate students from Barnard to SEAS didn’t know they needed.

On Valentine’s Day, CU Tonight released their first full-length episode on Facebook. The brainchild of hosts and co-creators Zahin Das, CC ’20, and Hannah Stern, BC ’20, CU Tonight attempted to simultaneously introduce itself to the undergrad community as a reputable source of fake news while also provide some ribbing commentary on Columbia’s tepid romance scene.

“A lot of people say, ‘Oh, Columbia doesn’t have a lot of community or a lot of campus culture,’ but I think there are a lot of things about Columbia culture that you can bring out in satire that don’t get addressed in a central way,” Das said in an interview after the release.

For Zahin, Hannah, and the nearly 50 writers, producers, actors, and actresses who collaborated on the half-hour special, satire was the best way Columbia could air its laundry in earnest.

“Sometimes we feel like just because we are at Columbia, we have to be über safe, über PC. I believe very strongly in the value of PC culture, but I also believe that if the taste is right, and if you’re making fun of the right thing, then I’m all for bringing it out. That’s what satire is. It’s supposed to make you sort of uncomfortable. It’s supposed to make you think about things.” Das said.

From the opening scenes, it was clear that CU Tonight intended to not only entertain students familiar with the gossip of campus, but also serve as a space to explore Columbia’s self-awareness problem. From Barnard social justice warriors, to Christian musicians on College Walk, to undergrad sadboys “with questionable interpretations of Nietzsche,”—to even Spectator—no one was spared from a little ribbing as CU Tonight’s skits and clips put the campus community in the limelight.

“Could there be intimacy in such a sexless place, you might ask?” Das asked in his opening monologue. “As far as I know, the only people on this campus who know how to express themselves emotionally are the Christians playing music on College Walk.”

The opening long-form skit chronicles an undercover detective working tirelessly behind the scenes of the famed campus Facebook page, Columbia Crushes, where romantic hopefuls on campus post messages to try and find that hot guy or girl they saw that one time in John Jay.

Struck with the dilemma of tracking down the most recent ‘lead,’ the mildly sexist detective and his female assistant spend a good portion of the day accosting students studying in Milstein with a $5 magnifying glass and a lot of khaki. After an afternoon of Pink Panther music and shenanigans, the detective and his assistant finally figure out something useful to post on the Columbia Crushes page. The crime-solving duo exit with a high five. Case closed.

As the show progressed to some Weekend Update-style headlines, one-liners ranged from patently blasé to increasingly edgy.

The week’s top stories included a reference to the graduate student Meningitis B debacle, a fake recap of superlative awards written by Spectator that ‘conveniently’ excluded the award for “whiniest, most incoherent publication,” and a quick shot at Columbia senior executives for getting hot over abortions.

News satire also included some hot takes from “live correspondence” at notable haunts around campus. 1020 was again characterized as a “sweaty meat-market” rife with old guys looking for first-years. The Heights was also recognized for its role as the most boring bar near campus at which to find an excuse to leave. Altogether, the segment betrayed enough accuracy to possibly be considered legitimate news.

The centerpiece of CU Tonight’s production consisted of an interview with Asya Sagnak, BC ’19, and Tina Simpson, BC ’19, director and producer respectively of King’s Crown Shakespeare Troupe’s spring production, Romeo and Juliet. The interview included a few of the notable features of their upcoming show and gave viewers some insight into the struggles of putting on outdoor performances on campus.

The final portion of the show featured a live musical performance by Columbia’s Kingsmen, the all-male acapella ensemble.The group performed its rendition of the Dion DiMucci pop hit, Runaround Sue, complete with all the necessary doo-wopping and snapping for the Valentine’s Day occasion.

In all, CU Tonight seems to be a success by traditional metrics. Currently, its promo video and first episode have received over 3,000 views on Facebook. The team is planning to release additional episodes on a monthly basis; the next one is scheduled for release in late March.

“One of the highlights of our critical reception is that one of our lead writers in the writer’s room sent us a screenshot of her little brother who watched the first episode and just said, “This is weird,” and that was it. She asked him if he meant, like, the entire thing? And he just said “Yes.” We were excited. That was basically exactly what we were going for,” Das said.