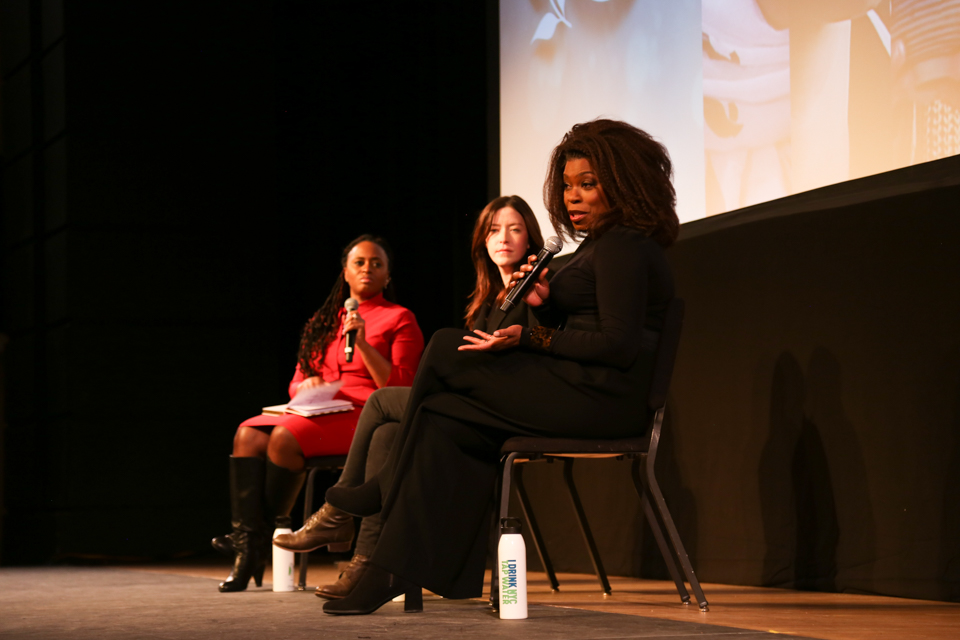 The "Fast Color" screening was followed by a Q&A with Julia Hart, Lorraine Toussaint, and film and TV critic Rebecca Theodore-Vachon.

“Courage, wit, persistence, and an indomitable spirit” were the words used by Athena Film Festival co-founder Kathryn Kolbert at Miller Theatre on Thursday night to describe the many female protagonists of this year’s feature films.

Each year, the four-day festival hosted by Barnard premieres and screens films with a focus on female leadership, both in front of and behind the camera.

I Am Somebody’s Child: The Regina Louise Story

Regina Louise spent her childhood in over 30 foster homes and a psychiatric facility. When Louise finally found someone who promised her a loving home, the adoption was denied. Courts in Texas rejected Jeanne Kerr’s adoption in 1978 because Louise was black and Kerr was white.

Two decades later, Kerr adopted Louise as an adult in the same courthouse where they had formerly been rejected.

At this year’s festival, actresses Angela Fairley and Sherri Saum, who both portrayed Louise at various stages of her life in the film “I Am Somebody’s Child: The Regina Louise Story,” came together with Louise herself for the film’s world premiere. The panelists discussed the foster care system and the importance of sharing personal stories in a conversation following the film’s screening.

Joining Louise, Fairley, and Saum at the panel was moderator and programmer Opal H. Bennett, Law ’05, and representatives from You Gotta Believe, an organization that focuses on placing foster children in permanent homes. The organization’s executive director, Mary Keane, and senior advocate for youth, Rosie Williams, spoke on their experiences of going through the system as a parent and foster child, respectively.

Williams, who like Louise was adopted as an adult, shared her perspective having transitioned from living in the foster system to working in it as a caseworker.

“The importance of me being an advocate is [that] I spent my whole life in the system,” Williams said. “And like you guys said, the system is very broken; it sets us up for failure. I aged out to nobody.”

Louise, reflecting on the process of adapting her memoirs, “Somebody’s Someone” and “Someone Has Led This Child to Believe,” into a single feature film, which was directed by Janice Cooke, recalled a significant moment in the casting process when she was told that no actresses were available to play her part.

“I’m sitting with a black woman at one of the world’s largest artists agencies, and she says, ‘There are no black people to play you,’’’ Louise said. “And I thought, ‘Oh my god, I love you right now. You have no idea what you just did. You just gave me permission like a motherfucker...’ Not only will there be someone to play me, but I thought in my head, ‘I can’t wait ’til it airs in your living room.’”

Ruth, a woman gifted with superhuman abilities, is tormented by painful, earthshaking seizures. She previously fell into substance abuse, abandoned her mother Bo, and left her newborn daughter Lila.

Her superhuman abilities, which used to allow her to both pulverize and magically restore material objects, have now rendered her incapable of overcoming these seizures. With nowhere left to go, she returns home, where Bo slowly welcomes Ruth back into her life.

“Fast Color” is the sophomore effort of director Julia Hart, CC ’04. It stars Gugu Mbatha-Raw as Ruth, Lorraine Toussaint as Bo, and Saniyya Sidney as Lila. Stunning visual effects, a genre-bending soundtrack—combining classical, electronic, and ambient melodies—and stellar performances from the cast transform this sci-fi thriller, superhero movie, and family drama into a mesmerizing cinematic experience. The screening was followed by a Q&A with Hart, Toussaint, and film and TV critic Rebecca Theodore-Vachon.

As she comes to terms with her fragmented past and her own broken self, Ruth manages to reconnect with Bo and now grown-up Lila. Her mother and daughter, who share her extraordinary powers, similarly struggle to embrace them. Near the end of the film, Ruth takes full control of her abilities—no longer impeded by her seizures—and, prepared to begin a new life with her daughter, conjures a stream of vibrant, beautiful colors that light up the sky.

Just as “Fast Color” is a movie about motherhood, it’s also about three generations of women finding the courage to stand up for themselves. These women, in the words of Toussaint, also “happen to be black,” since the movie is purposefully not self-aware of the race of its female leads but is rather a universal story in its own right.

According to Hart, it’s about time that there was a superhero film starring women of color who “create” and “fix” things rather than one where “white men destroy things to save the world.”

“Fast Color” not only provides moviegoers with a long-overdue narrative, Hart said, but also sets a precedent for the way stories about people of color should be told—either through people of color themselves or white women and men who dare to imagine beyond their own experience.