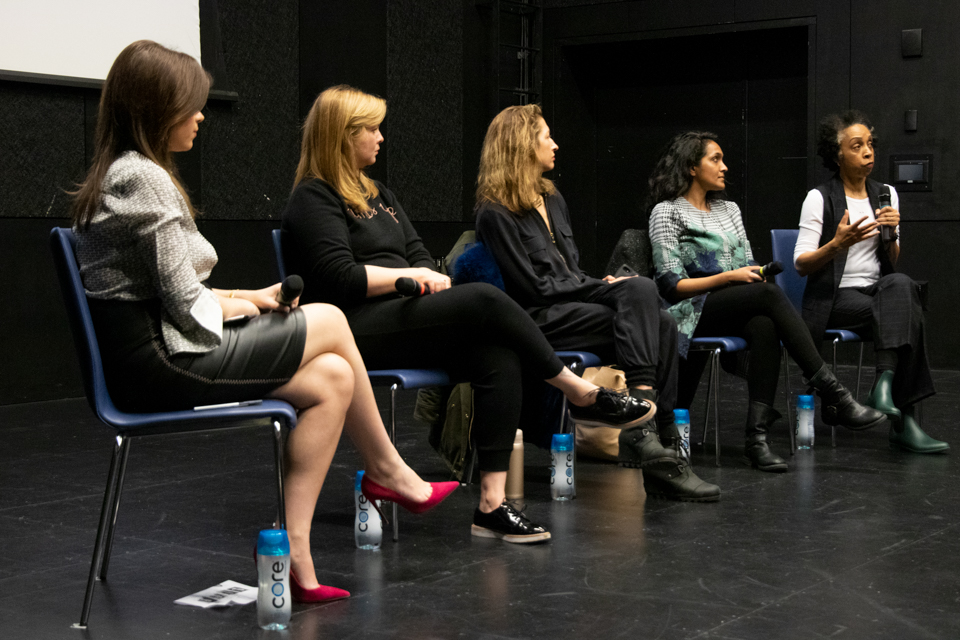 Leading members of the Time’s Up movement spoke on a panel last Saturday at the Athena Film Festival.

The Time’s Up movement launched on Jan 1, 2018 as a response to sexual harassment and assault allegations made against former movie producer Harvey Weinstein. On Friday night, at Barnard’s ninth annual Athena Film Festival, one of the movement’s founders, Nina Shaw, BC ’76, Law ’79, was honored with the Athena Award for her excellence in leadership within the film industry while wearing a Time’s Up pin on her dress.

A year after the movement’s launch, Barnard fostered conversation on the movement’s impact, as well as the work still left to be done, through a series of panels featuring members of the film industry. At the Time’s Up X2 panel on Saturday and the Programming for Parity panel on Sunday, activists, producers, programmers, and directors came together to discuss how to prioritize representation and systemic change in Hollywood.

Leading members of the Time’s Up movement spoke on a panel last Saturday at the Athena Film Festival. The panel, moderated by CNN Entertainment Reporter Chloe Melas, included Shaw and the Time’s Up Entertainment executive director, Nithya Ramen, as well as actresses Amber Tamblyn and Alysia Reiner.

“It’s about seeing this not as a moment in time, but as a real structural retooling,” Tamblyn said, “to not be afraid, truly, from using the word ‘revolution.’ We have to think in that big language. We have to know that this is much bigger than a momentary shake-up.”

Melas then asked the panel if they felt the movement was losing steam as it evolved.

“Change is never comfortable,” Reiner said, “but it’s how we grow. … As a society we’re falling a lot right now, and that’s going to be uncomfortable. But we have to keep on getting back up.”

Now, the movement’s focus has become a larger push for equality in the workplace. This new initiative, known as Time’s Up X2, hopes to double the number of women across positions in the entertainment industry.

A new Time’s Up 4% Challenge has already been taken on by 100 individuals and seven major studios. Participants must commit to working with a female director in the next 18 months. The challenge gets its name from a remarkable statistic: Of the 1,200 highest-grossing films released between 2007 and 2018, only 4 percent had female directors.

The panelists acknowledged that despite the movement’s many successes, it was not immune to the same issues it has fought to eliminate. Nina Shaw commented on former Time’s Up CEO Lisa Borders’ recent resignation amid sexual assault allegations against her son.

“One of the things that all of us have to acknowledge is that, given how embedded these behaviors are in our society, it is very likely that every single one of us is going to be touched in some way,” Shaw said. “We have to figure out how to deal with it.”

Despite the many challenges ahead for Time’s Up, every panel member seemed confident about its progress. They stressed the importance of action in numbers: that joining together through a series of small acts can and will reshape structural elements of the workplace that have historically fostered inequality.

The kinds of stories and filmmakers represented on the big screen at film festivals are constantly in conversation with questions of diversity. Of equal importance, but often overlooked, are the eyes that watch these films and give them their platform.

At the Programming for Parity panel hosted at the Glicker-Milstein Theatre on Sunday, representatives from film festivals and public television channels discussed the importance of diverse programming in conversation with moderator Opal H. Bennett, Law ’05, who herself is the programmer of the Athena Film Festival.

Panelists Cara Cusumano, BC ’05 and Director of Programming for the Tribeca Film Festival, Nicole Tsien, Associate Producer of the Public Broadcasting Service’s POV, Basil Tsiokos, Director of Programming for DOC NYC, and David Nugent, Artistic Director for the Nantucket International Film Festival, offered a range of perspectives regarding how their respective film channels curate with parity in mind.

The panelists discussed how diversity initiatives impact every level of programming for festivals of all scales. Programming for film festivals often includes hiring pre-screeners who watch festival submissions before they reach a selection committee, putting together panels of judges, and preselecting films to be screened.

“[Parity] has become much more kind of headline news in the festival world in the last few years. More so than ever I think we've really put forward a program that we're really proud of, especially in terms of gender parity. We have 46 percent of our feature lineup last year was directed by women. The past four out of six years we've opened with a film directed by a woman or a person of color," Cusumano said, explaining the Tribeca Film Festival’s approach to diversity in programming.

Reflecting on the programming process for Athena, Bennett added that it is not enough to find films that feature female characters; what those characters do is of equal importance.