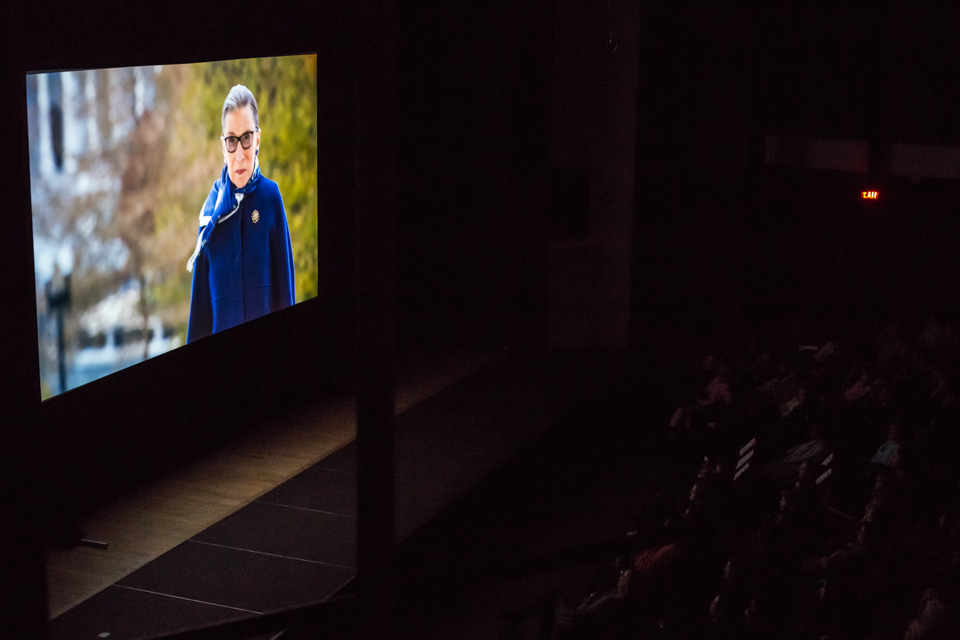 “On the Basis of Sex,” released on Christmas Day last year, was screened at the Athena Film Festival on Saturday, and was followed by a panel.

The Notorious RBG, or Ruth Bader Ginsburg, Law ’59, is now one of the most well-known members of the Supreme Court bench and a cultural icon. The popularity of “On the Basis of Sex,” the movie based on Justice Ginsburg’s involvement in the 1972 case Charles E. Moritz v. Commissioner of Internal Revenue, perhaps embodies this phenomenon more than anything else.

But instead of furthering the Wonder Woman depictions of Justice Ginsburg, the film gives the audience a more realistic and ultimately more touching glimpse of not only who the icon is, but also how she came to be.

“On the Basis of Sex,” released on Christmas Day last year, was screened at the Athena Film Festival on Saturday, and was followed by a panel moderated by CNN journalist and co-founder of the blog “The Notorious RBG,” Irin Carmon. The panel also featured Jane Ginsburg, the Morton L. Janklow Professor of Literary and Artistic Property Law at Columbia Law School and Ruth Bader Ginsburg’s daughter; Jean Cohen, producer of the documentary “RBG;” and Daniel Stiepleman, executive producer and screenwriter of the film.

The movie is an origin story of how Justice Ginsburg went from brilliant law student to feminist litigator, following her from her first day at Harvard Law School (which she attended prior to transferring to Columbia) to the oral arguments of Moritz v. Commissioner, the first case she ever litigated.

“At some point, she wasn’t RBG,” Stiepleman said, although he admitted that at one point, even he, “imagined that Ruth burst forth out of the head of Zeus fully formed.”

Before Ginsburg became RBG, she was called “Kiki” by her childhood friends and family. The feature-length film seamlessly incorporated the key influences in her life, including that of her mother Celia Bader, Martin (Marty) Ginsburg, Pauli Murray, Dorothy Kenyon, Columbia Law Professor Gerald Gunther, and the younger generation.

Though these figures certainly played prominent roles in Justice Ginsburg’s life, they did not necessarily do so in the way the film depicted. Professor Jane Ginsburg explained that her character in the film was heavily fictionalized.

“I was not more politically engaged than my mother,” Professor Ginsburg said in an interview with Spectator. “The movie makes me seem as if I was rebellious and politically engaged and pushed my mother to be more radical than she might have otherwise have been. … There was never a point where my mother had any doubt about ... not only the justice but the desirability of the course she was pursuing.”

The film captured both a turning point in Justice Ginsburg’s life and one in American history. American society at the time was just beginning to recognize the full reach of sex discrimination. Ruth Bader Ginsburg and Marty Ginsburg believed that “these obstacles could be overcome with the assistance of a well thought out litigation strategy, which would reflect the tremendous changes that were happening in society,” Professor Ginsburg said. “This was not an attempt to push the law in front of where society was going, but rather to help those in power to understand where it was going.”

According to Jane Ginsburg, the law was a fifth member of the family as she grew up: “There was never any doubt, any moment when the family thought that somehow we were being undermined or compromised because of what she was doing. On the contrary, not just on the Moritz case, but my parents discussed everything. I don’t remember exactly at what point, but I was certainly still in high school when I got involved reading briefs and editing briefs, so it was very much a family enterprise.”

The film itself was also a family affair that involved three generations. As Professor Ginsburg contributed to and corrected her cousin Stiepleman’s script, her son Paul Spera was also in the film as one of Justice Ginsburg’s students. Ironically, the grandson of the feminist icon was “the jerk who says it’s perfectly normal that men get paid more because we hunt the mammoth,” Professor Ginsburg said.

Justice Ginsburg’s opponents in the Moritz v. Commissioner case characterized her as a proponent of “radical social change” set upon destroying the American family. But it was family that truly made Justice Ginsburg who she is.

“Where did he come from?” an audience member asked Professor Ginsburg, joking that a husband like Marty Ginsburg who not only split domestic tasks with his wife but was also eventually indispensable in her nomination to the Supreme Court, was like an “alien” in the 1950s.

But Marty Ginsburg was not the only Ginsburg who was ever-supportive of the justice. After his passing, his daughter adopted his role as Chef Supreme in the Ginsburg family. Professor Ginsburg may not have made her mother more political, as the film showed, but she does travel regularly to Washington, D.C. to prepare meals for the justice.

Therefore, it is perhaps those who have loved and supported Justice Ginsburg who gave her a bulletproof and superhuman appearance. Although the justice is 85 years old, the film does not end on a note of reminiscence, but on the question of what has yet to come as the justice herself is shown walking up the steps of the Supreme Court, looking ahead.