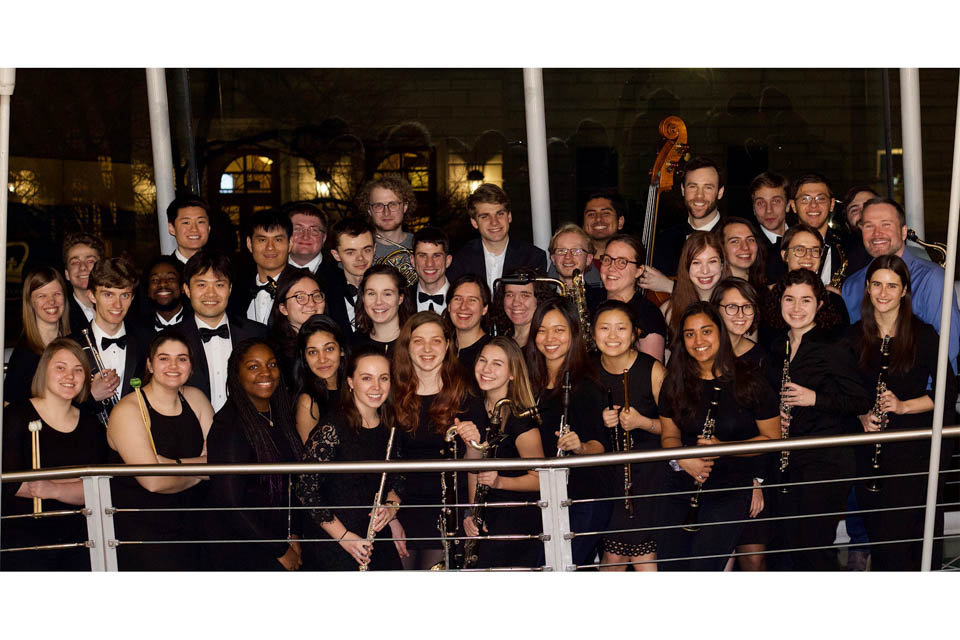 On the stage where Yo-Yo Ma, Billie Holliday, The Beatles, and other musical titans have performed their masterpieces, the Columbia University Wind Ensemble premiered three compositions and played a fourth showstopper at Carnegie Hall on Monday night.

For the first hour of the program, CUWE waited in the green room while precocious young singers from some of the nation’s best elementary and high school choirs presented their ambitious repertoire. Parents stood to videotape their children, while personnel in crimson uniforms patrolled the aisles to remind them to turn off their cell phones. After the intermission, the tone shifted. As the lights went down, in an electric silence, CUWE filed onstage.

CUWE president Brent Morden, CC ’19, took the podium to conduct the world premiere of his composition “Fell Swoop.” Underscored by an exhilarating drumline, the piece built ominously before descending into whimsical chaos. Swinging melodies evoked the motion of flight while the rhythms pulsed relentlessly, closing with an abrupt and thrilling ending that suggested a sharp intake of breath before a fall.

Noble conducted the remainder of the program, which included the U.S. premiere of Julie Giroux’s composition “Always” and the world premiere of Catherine Likhuta’s “Home Away From Home.” In “Always,” CUWE glided between epic swells and delicate music box melodies. With magnificent crescendos, the ensemble took advantage of the venue’s legendary acoustics. Contrary to what its title might suggest, “Home Away From Home” took a menacing tone, featuring thunderous drums, quietly creeping melodic lines, musical car chases, and screeching halts.

The standout piece was the finale, Omar Thomas’ composition “Of Our New Day Begun.” Thomas dedicated the piece to the Charleston Nine, a group of churchgoers who were murdered at the Mother Emanuel AME Church in Charleston, South Carolina. He prefaced the performance by reading each of the victims’ names into the microphone. CUWE’s performance was reverent and determined, with militant drums and subdued melodies that honored the lives lost. The music crescendoed like a flame growing into an inferno before it was abruptly cut off.

In the following silence, the musicians began stomping their feet. They built a rhythm using body percussion and began to sing “Lift Ev’ry Voice and Sing,” a black spiritual with a resounding message of hope and perseverance. The sound of their voices, echoing in the 2,804-seat auditorium, was hauntingly beautiful.

The piece became more high-spirited as it neared its conclusion, featuring two triumphant false endings before the musicians resumed their gentle foot-stomping. It was the equivalent of seated marching, suggesting quiet determination. The piece eventually concluded with a breathtaking clash that lingered in the air.

As the last strain of music faded, CUWE stood up to bow while the audience stood up from their red velvet-covered seats to applaud.

Correction: A previous version of this article misidentified the Charleston Nine as the Charleston Sofa Super Store fire of 2007 that killed 9 firefighters. Spectator regrets the error.