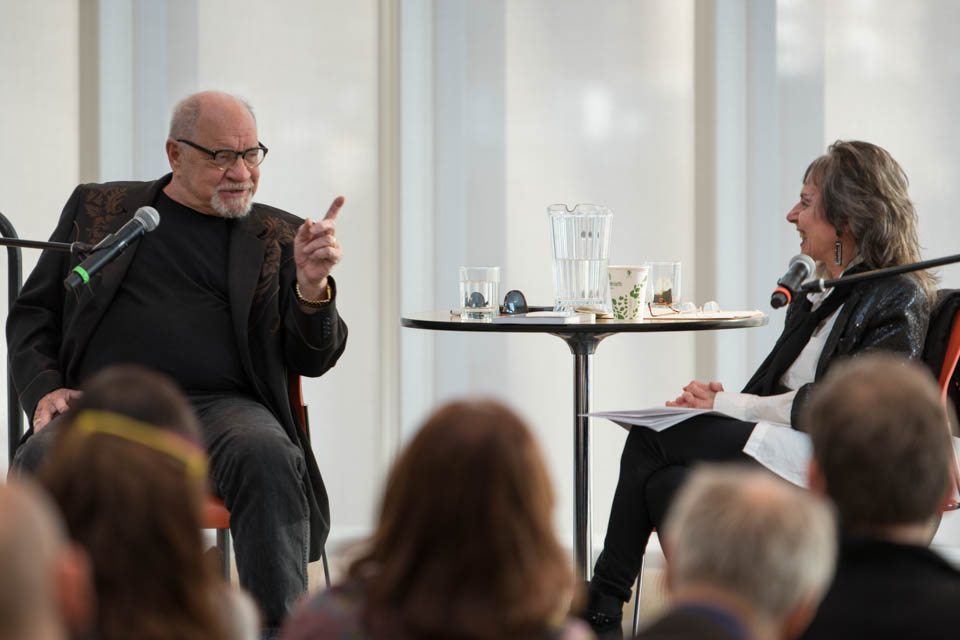 Screenwriter Paul Schrader in conversation during a panel at last year's festival.

When one thinks about film noir, classics like “Double Indemnity” (1944) or “The Big Sleep” (1946) usually come to mind, but the literary sources of inspiration for these movies often do not. And while film scholars have deemed valuable the work of crime fiction writers like Raymond Chandler or Dashiell Hammett, the work of short story writer and novelist Cornell Woolrich has not received the same praise.

The second annual Dr. Saul and Dorothy Kit Film Noir Festival is seeking to give Woolrich, whose stories have been adapted into more than 30 films and many television and radio programs, the recognition he deserves.

Part of a decade-long retrospective of film noir, the festival is funded by a gift from Gordon Kit, CC ’76, a devotee of the genre, in honor of his parents Dr. Saul and Dorothy Kit, who were both film, theater, and literature enthusiasts. This year’s festival will open on Wednesday and run through March 31 in the Katharina Otto-Bernstein Screening Room at the Lenfest Center for the Arts.

In an interview with Spectator, the film festival’s programmer, film historian, and professor Rob King, and manager Soheil Rezayazdi from the film and media studies department, talked about this year’s theme, the festival’s purpose, and their own experiences as organizers of the event.

The festival has specific themes each year, given that, as Rezayazdi noted, film noir itself is very broad. King and Rezayazdi talked about this year’s theme; specifically, about the fact that Woolrich, apart from being an incredibly prolific writer, was also a Columbia student from 1921 to 1925, though he never graduated, and lived in Morningside Heights for much of his life.

“Part of the thinking was [that] it's also bringing [Woolrich’s] stories back to where they originated. A lot of these stories were written within two miles of this theater,” Rezayazdi said.

Apart from bringing Woolrich’s stories back to Morningside, this year, and throughout its planned 10-year duration, the festival seeks to pose and explore the question, “What is film noir?” and contextualize “noir” films in a much broader mediascape.

“It provides you an opportunity to continually be asking the question: ‘What actually is film noir?’” King said. “This year, by focusing on Woolrich, it's allowed us to raise that question again and to find that we need to actually contextualize [the term film noir] against this larger noir mediascape that also includes suspense stories on radio, story magazines, the work of writers like Cornell Woolrich, and early television: a whole mediascape within which these kinds of narratives were circulated.”

There's no definitive way of answering the question, according to King, which allows them to experiment with the genre by thinking differently about films that have been classified as noir or rethinking certain films as noir.

“Doing something like this Woolrich retrospective actually throws into clear relief what is noir about Hitchcock, which is something that's been hotly debated,” King said. “Both Woolrich and Hitchcock were drawn to these kinds of ‘wrong man’ plots, in which a man typically is accused of something that he doesn't remember or that he thinks he didn't do. … And so you actually start to see what is noir about Hitchcock in a clearer way by framing ‘Rear Window’ within this kind of retrospective.”

Among the films that will be screened are Alfred Hitchcock’s “Rear Window,” François Truffaut’s “The Bride Wore Black,” “The Window,” “Black Angel,” and low-budget movies like “The Guilty” and “The Chase.” The screenings are organized thematically and some days include “double bills,” or double features.

According to King, Gordon Kit’s vision for the festival was that, apart from being a retrospective of film noir, it would have an academic component—scholars would provide lectures that would be accessible for and appeal to the general public. For this reason, they’ve tried to incorporate speakers with different kinds of expertise in film noir. The panelists for this year’s festival include James Naremore, who King said is the foremost American film noir scholar, Francis M. Nevins Jr., Woolrich's biographer, and other film scholars including Ann Douglas and Pamela Wojcik.

“One of the fun and challenging things about putting on a festival like this with a very specific mandate is that we can at once show the titles that people expect and then maybe show some titles that sort of push the definition or [the] envelope a little,” Rezayazdi said.