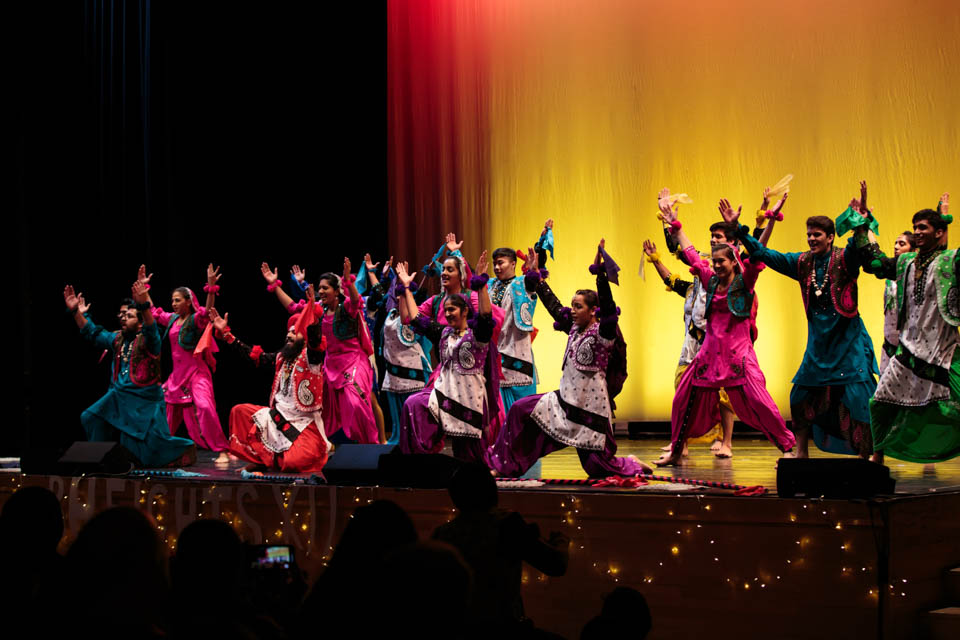 CU Bhangra's showcase Bhangra in the Heights brings together Bhangra teams from across the city and the East Coast.

When the Columbia University Bhangra team emerges on stage at their annual Bhangra in the Heights performances, they are wearing traditional Punjabi costumes in red, blue, turquoise, green, purple, and yellow pairings. They are often holding daangs and saaps—two key props used in any number of Bhangra segments—and dancing to North Indian music.

The same group can also be seen in their Bhangra in the Heights 2019 hype video dancing to DJ Snake and Lil Jon’s song “Turn Down For What.” This time the group is wearing all black outfits and fusing Punjabi dance moves with hip-hop music. The transformation is far from jarring—because what remains constant between the Punjabi music, DJ Snake, and Lil Jon is an ensemble that possesses an ability to captivate its audience.

Through their embrace of both Punjabi culture and contemporary New York City life, their openness to accepting members with varying skill levels, and a dedication to keeping in touch with alumni, CU Bhangra has built a 17-year legacy of dynamism and community.

“I’m a dancer. I came to join the dance team focusing on becoming a good dancer and evolving as a dancer, but I think for me that’s secondary now, and what’s most important is that we have a family on campus,” said CU Bhangra public relations chair Gauri Talwar, BC ’21.

“These friends that we make on this team are going to be there for life,” she said. “Having a good set or anything, having cool choreo, is not as much a priority as it is having a family on campus, having these people and being there for them.”

CU Bhangra was founded in 2002 by Chetan Bagga, CC ’05, and Bandana Malik, BC ’05, and has since expanded to performances often including 19 dancers at a time, a significant increase from the typical Bhangra segments of 12 or 16 dancers.

In a CU Bhangra performance, dancers are paired off based on the colors of their costumes and typically perform eight segments, each about one minute. Though these segments sometimes have accompanying storylines, such as a boy flirting with a girl, the focus of the ensemble is on choreography and form.

Fresh from finishing fourth at Bhangra Blitz, a collegiate Bhangra competition hosted at Southern Methodist University in Dallas on Feb. 23, the team is especially proud of the success and growth it has achieved since 2002.

The team’s signature showcase, Bhangra in the Heights, began in 2007 and has become an annual highlight for the University and a well-known stop in Bhangra circuits.

“[Bhangra in the Heights] traditionally has always been a showcase, not a competition, and I think that distinction is pretty important, because it’s usually been a venue for teams that maybe don’t get to travel and showcase their sets at other competitions,” explained CU Bhangra co-captain Anmolpreet Kandola, CC ’19. 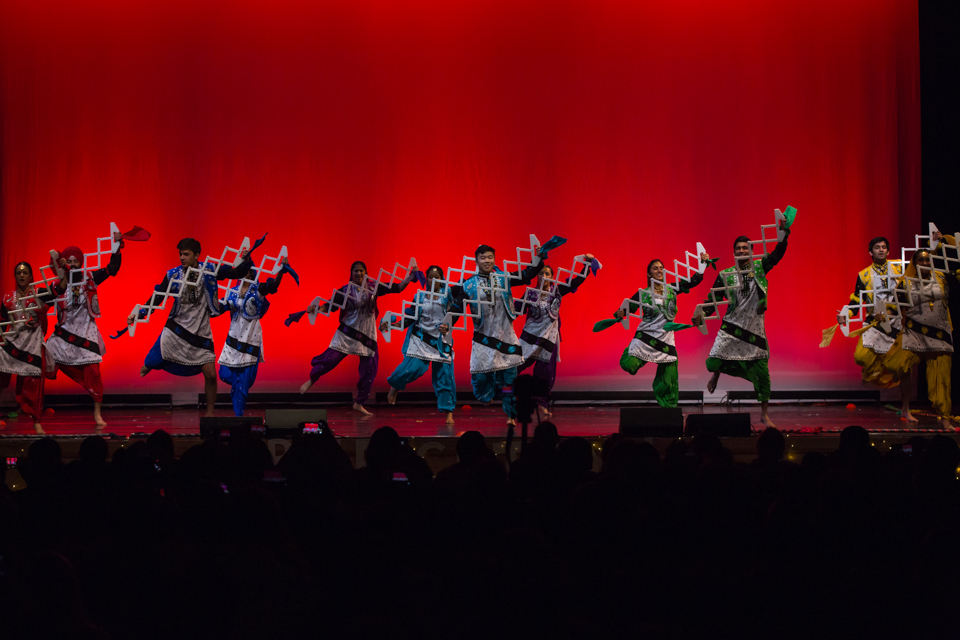 CU Bhangra’s hope is that they will have participated in enough events central to the Columbia community that a student will have already familiarized themselves with the group by the time Bhangra in the Heights rolls around in the Spring, whether that be at Night Market, Glass House Rocks, or cultureSHOCK.

“We make a really big effort not to be an insular organization that just performs at our showcase, but we really do enjoy performing for the Columbia community,” said Bhangra team secretary Manav Goel, SEAS ’21.

In order to move past the potentially “insular” mindset Goel describes, the team has developed relationships not only with other dance and cultural groups on campus but also with Bhangra teams across the city and the East Coast. These include groups from Princeton, Northeastern, the Massachusetts Institute of Technology, and the University of Rochester, as well as professional teams such as the New England Bhangra Club and Bhangra Theory.

These relationships, according to CU Bhangra, are imperative to the success of Bhangra in the Heights.

“Definitely we try to open up slots for new teams and stuff like that, and not the same teams apply every year just because of availability, but there’s definitely majority teams that have come before, and then one, two, three new teams that always exchange year to year,” said Kandola.

“But also people know at this point what Bhangra in the Heights is because it’s such a big staple showcase, and so people are generally interested to apply. Everyone wants to come to New York and have a good time here.”

Besides the involvement of collegiate and professional Bhangra teams, Bhangra in the Heights also consistently includes a performance by a group of CU Bhangra alumni.

“One of the biggest reasons why I think CU Bhangra’s tradition is so strong is because I feel like we have a really awesome alumni community of people who are both in New York City and outside of it who come back,” said Kandola. “We had people who graduated as early as 2012 who still come back on a yearly basis, even if not to perform, just to come say hi and come for that weekend.”

Kandola adds that one of the highlights of the weekend is witnessing the interaction between alumni and older dancers.

“We try to do a meet and greet with the team,” said Kandola. “That happens every year, and I think that’s really cool for like our newbies to see. We have [alumni] from like five, six, seven years ago. Someone’s always here and always willing to reach out and come meet you.”

For Naina Sahrawat, BC ’18, a former captain of CU Bhangra who remains connected with many members of the team, the most meaningful connection between oldies and newbies came from the tradition of letter-writing that the team established for its graduating seniors. The letters are written to wish graduating seniors well in their future endeavors and thank them for their contributions to the team.

“To then get those letters my senior year, after my captain year—and a really, really difficult year in many, many ways—I guess I had kind of forgot that letters were a thing, and then to be given them at the end of that year…it was really, I think, amazing,” said Sahrawat.

Editor’s Note: Managing Editor Rahil Kamath is a former dancer on Columbia Bhangra. He was not involved in the editing of this article.