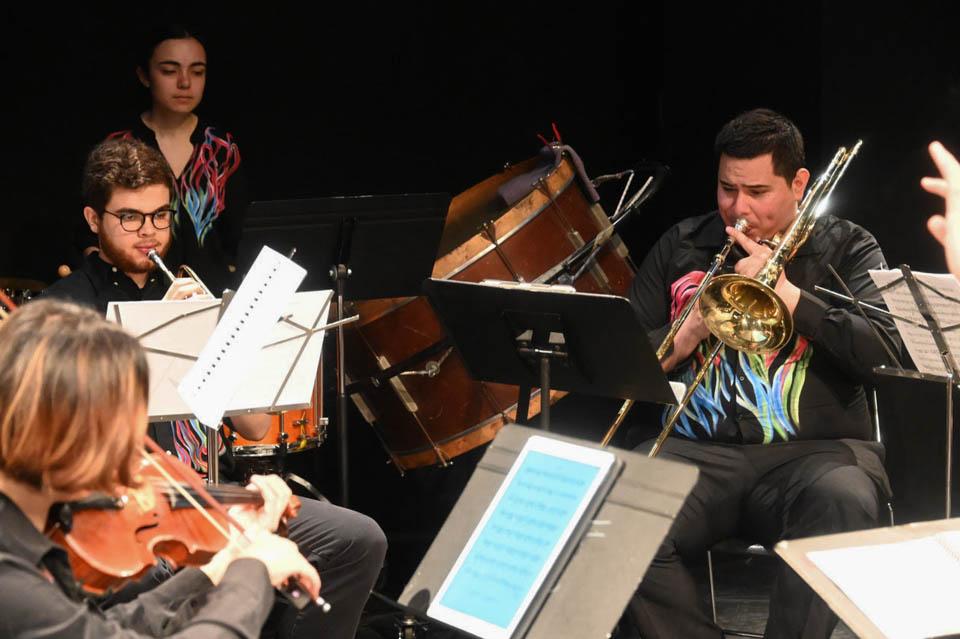 The show comprised of music, dance, narration, and pantomime, which came together for an eclectic performance.

“Do you take any notice of people you don’t know?”

The voice of the soldier asked, as he paced back and forth. The voice and body are separate, each portrayed by different performers.

“No. You say ‘I don’t know you,’” the voice concluded, berating himself.

Clothed in a crimson red cape, an old lady had approached the soldier, and he had stopped to listen. Little did he know, she was the devil.

In September 1918, right before the conclusion of World War I, Igor Stravinsky’s “A Soldier’s Tale” was first performed in Switzerland.

Columbia University Performing Arts League Special Project presented an adaptation of “A Soldier’s Tale” on March 31 at the Austin E. Quigley Black Box Theatre. Produced by Nikki Pet, CC ’20, and narrated by Sarah Fleiss, CC ’21, the show comprised of music, dance, narration, and pantomime, which came together for an eclectic performance.

“L’Histoire du Soldat”, as it is called in French, tells the story of a soldier, Joseph, played by Roland Spier, CC ’20, who is outwitted by the devil, played by Margaux Pisciotta, BC ’22, into selling his violin for a book that can grant him all that he asks for, and through this exchange, he acquires wealth. After an unfortunate adverse side effect of the trade, Joseph is made a stranger in his own land. Hethen embarks on a mission to outsmart the devil and regain his lost violin.

Originality was expressed throughout this presentation of Stravinsky’s timeless piece. Pet, who doubled as a producer and clarinetist in the production, aimed to bring music to the forefront of the hour-long performance. This vision was stylishly realized by the permanent positioning of musicians at the rear-center of the stage.

“What I wanted was a very music-centric thing because, if you find recordings on YouTube [of “L’Histoire du Soldat”], it’s like a pit orchestra,” Pet said. “The musicians are in the corner in the dark; no one can see them. You just hear them, and everything is pantomimed; everything is acted out very explicitly.”

Contributing to the eccentricity of placing the musicians onstage, the unusual costumes added a much-needed color to the macabre tale.

Although all the costumes had the same pattern, each character was easily indentifiable by a certain hue. While the devil and the soldier were clad in bright red and leafy green respectively, the princess, portrayed by Emma Vincent, BC ’19, was gracefully adorned in sky blue. These distinctive outfits were hand painted over the course of several hours by violinist Lara Lewison, CC ’20. It was clear that Lewison shared Pet’s vision in shedding light on the musicians, as she incorporated them into the story through their costumes.

“I wanted to visually incorporate [the musicians] as part of the story and [tell] the story through the music, so we all have all three colors on us; we participate in all parts of the story as well,” Lewison said.

Michael Wheatley, CC ’19, who choreographed the show, also injected his own creative flavor. Conventionally, tango, waltz, and ragtime are the dances in Stravinsky’s work, but Wheatley, the director of Columbia University Ballet Ensemble, decided to use classical ballet to aid the telling of the story.

“I thought it was interesting having both the princess and the devil as very classical ballet dancers because there’s kind of a duality. Classical ballet is very beautiful and enjoyable to watch [but it’s] a very competitive world, it’s a very painful world; in many ways it’s unpleasant, so you get both aspects of it,” Wheatley said. “There are some things that they both do, like the same choreography for some things to kind of reflect that sort of shared nature, and also to reflect that they are both these influential forces that act on the soldier in different ways, and I wanted to emphasize that.”

In a compelling scene, the soldier literally dared to dance with the devil, bringing to life the expression that aptly describes his reckless exchange. As they took dainty steps with precision, the two maintained stern looks on their faces, reflecting the tension between them and spotlighting the duality that Wheatley had mentioned.

The narration blended seamlessly with the pantomime acting, as exemplified in the scene in which the soldier returns home as a stranger. As he pleads to be recognized, gesturing towards audience members, the voice of the soldier, spoken by Maya Millward, BC ’21, echoed, “They all take me for a ghost, like a dead among the living.”

Ingenuity lies at the very heart of this adaptation of “A Soldier’s Tale.” From the music-centric approach to the colorful costumes to the ballet-inspired choreography, the talented trio behind the production realized their vision of originality.