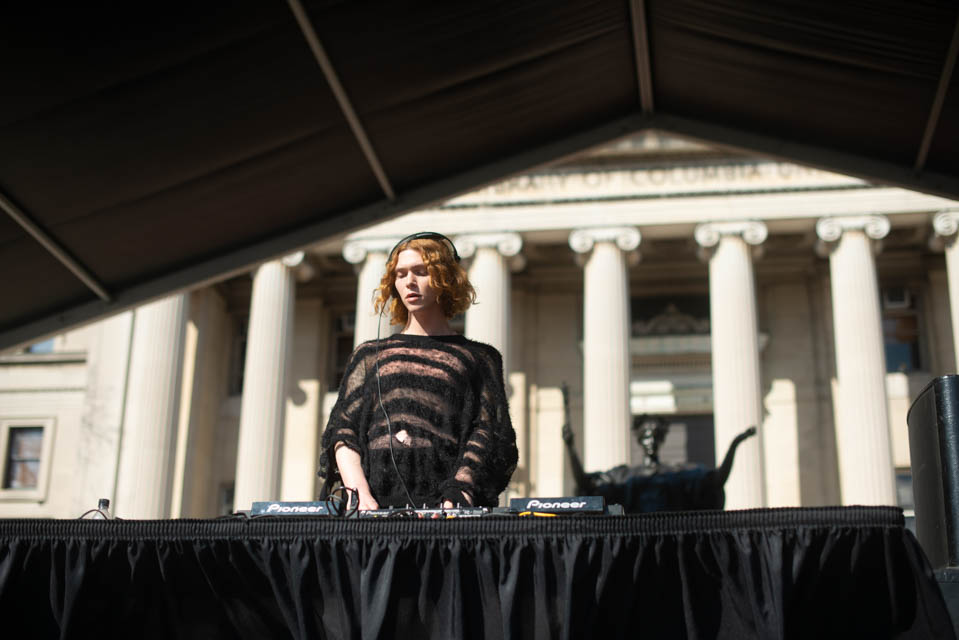 SOPHIE made history as the first openly transgender artist to be nominated for a Grammy award for Best Dance/Electronic album.

Bacchanal almost didn’t happen this year. At least, that’s the narrative the Bacchanal Committee propagated in the weeks leading up to the music festival, which was later revealed to be an elaborate prank on the student body.

On Saturday afternoon, students lounged on the Low Plaza lawns and crowded into the mosh pits to see four acts share the stage with Alma Mater. It’s safe to say students were glad that this year’s concert, titled “Bacchanal is Canceled,” was not, in fact, canceled.

This year’s opener was Oswald Fresh, the razor-sharp rapper and singer who won Bacchanal’s Battle of the Bands competition in February. He spun clever, introspective lyrics at a mile-a-minute pace, seemingly without ever taking a breath. In an intimate moment, he sat down onstage, practically cross-legged, and sang to his audience of fellow students with his hand on his heart. On top of his Columbia course load, Oswald Fresh writes and records music for release on Spotify and Apple Music, but he downplays his hard work, rapping, “I don’t really write songs, I just think about life.” Clearly, he’s been doing a lot of thinking lately.

Next, to kick off the festival’s first all-womxn lineup, Japanese-British singer-songwriter Rina Sawayama stormed the stage wearing a flamboyant neon green confection, which she quickly whipped off to reveal a mesh dress. Glittery makeup fittingly framed her eyes like a superhero mask: She had a fierce stage presence, and her slick choreography was dominated by power poses. She pumped her fists, crossed her arms, and tilted her chin up to the sky while singing empowerment anthems, including her hit “Take Me As I Am.”

At one point, Sawayama spoke to the crowd, saying, “So you guys must be pretty fuckin’ special to go here, right? Make some noise if you’re fuckin’ special.” The students roared in response. She smiled and said, “I think you’re all superstars” before launching into “Ordinary Superstar,” showcasing her honeyed vocals. In a touching call-and-response moment, students joyously sang Sawayama’s lyric back to her: “Don’t you wanna be ordinary with me?”

Grammy-nominated rapper, singer, and songwriter Tierra Whack was the fan favorite. When she called out an authoritative “Whack,” her intensely loyal fans responded, “WHACK!” It’s not hard to understand their devotion: Her album Whack World is full of sleeper hooks and smart, insightful lyrics. In “Cable Guy,” she assigns topical new meanings to acronyms: MTV, for instance, becomes “men touch vaginas.” On Saturday, fans knew every one of these remade acronyms and called them out with fervor.

When Tierra Whack brought out a bowl of fruit and a stack of paper plates in reference to her song “Fruit Salad,” fans cheered and laughed at the inside joke. Later, she took audience engagement to another level when she crowd-surfed and walked down the aisle between the left and right pit sections, grasping hands with her fans over the barricades. To conclude her set, she offered some sisterly advice: “Don’t do drugs, stay in school, graduate. I love you guys so much.” She walked offstage with a friendly wave.

Finally, it was headliner SOPHIE’s turn. A record producer, songwriter, and DJ who has collaborated with the likes of Madonna and Charli XCX, SOPHIE made history as the first openly transgender artist to be nominated for a Grammy award for Best Dance/Electronic album, and she was Bacchanal’s first trans headliner. Wearing headphones with one earphone slightly skewed, she was supremely focused and cool as the audience moshed to her music. When she brought the music’s volume down, screams rose in the silence.

SOPHIE’s subtlety was what made her so compelling: Watching her hands move over the soundboard was like watching a painter’s delicate brushstrokes. Moving gently to the music, like it was an electric pulse coursing through her, SOPHIE connected to the audience with quick glances and closed-lip smiles. She never spoke to the crowd, though she occasionally mouthed the words to some of her songs and mouthed “thank you” at the end of her set. She said goodbye to the audience with folded hands, a slight bow, and a shy wave, leaving the students to catch their breath and soak up the golden-hour sunlight.

In a Facebook and Instagram livestream before the concert, Bacchanal co-president Vanessa Chadehumbe, CC ’19, said, “We are going for genre diversity, gender diversity, racial diversity. … This is arguably the most iconic Bacchanal of all time.” As for the iconic status of this year’s Bacchanal, only time will tell – but it was certainly a Bacchanal to remember.