Prominent Columbia professors Shapiro and McWhorter debate the accessibility of translation at ‘Shakespeare in Translation?’

Prominent Columbia professors Shapiro and McWhorter debate the accessibility of translation at ‘Shakespeare in Translation?’ 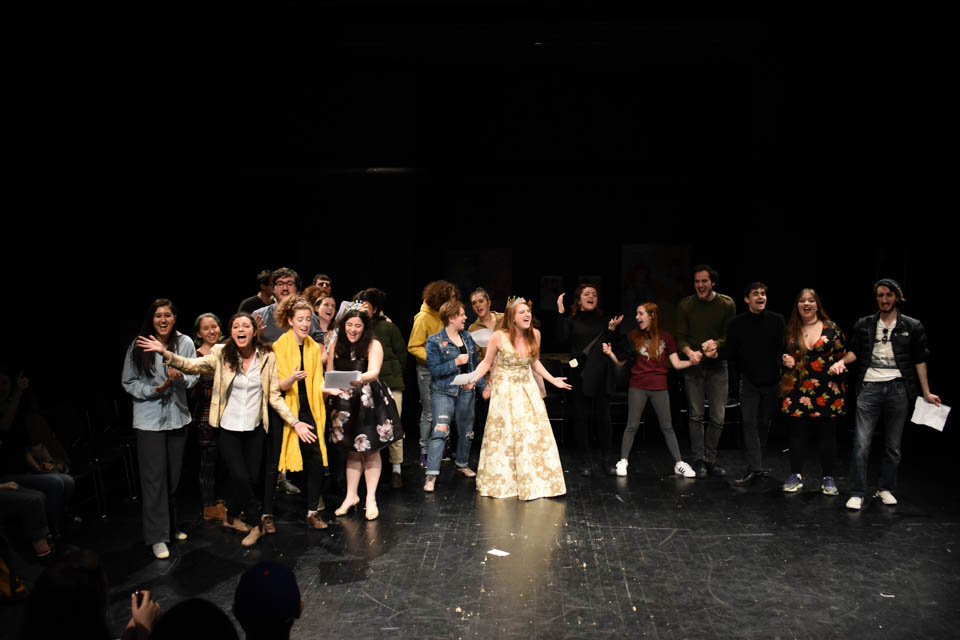 Early Modern English isn’t too far from contemporary English, but too many “thees” and “thous” can trip up anyone. In this age, Shakespeare’s work is constantly being translated in order to reach wider modern audiences, but the question remains—to translate or not to translate?

That was the question posed to Columbia professors James Shapiro and John McWhorter on Thursday night in Barnard Hall’s Held Lecture Hall for the first-ever “Shakespeare in Translation?”—an event put on by King’s Crown Shakespeare Troupe and the Center for American Studies.

The event included performances of original and translated versions of Shakespeare, as well as a conversation with prominent professors McWhorter and Shapiro. It was produced by Luke Cregan, CC ’19, Juliet Emerson-Colvin, BC ’21, and Sophia Seidenberg, BC ’19.

KCST started the night off with adaptations of Two Noble Kinsmen (Act 1 Scene 2) and Macbeth (Act 1 Scene 2), each performed twice. The first performance used the original Shakespeare text, and the second was a version in which approximately 10 percent of the language had been translated into contemporary English. All four adaptations were directed by Karinya Ghiara, CC ’19.

Following the performances, McWhorter and Shapiro, who both teach English and comparative literature, discussed the advantages and disadvantages of translating Shakespeare.

McWhorter, taking a pro-translation stance, argued that, since language has inevitably changed over time, translating Shakespeare’s work is necessary to make the texts more accessible. This accessibility allows younger generations to appreciate and enjoy the bard’s plays.

“I wish that the text itself with all of its valuable traits could communicate in real time and I just fear it doesn’t,” McWhorter said. “I find myself thinking of a very cultured friend saying to me that the first time he had truly understood a Shakespeare play was when he saw one in French that was translated into a modern version of the language.”

On the other hand, Shapiro argued that translating Shakespeare’s work takes away its elegance, specificity, and history. In regards to accessibility, Shapiro claimed that it can depend more on actors and the performance itself.

Shapiro recalled watching Hamlet with inmates at a federal prison in downtown Manhattan.

“I’m sure they didn’t know what a ‘bare bodkin’ was when Hamlet speaks about taking his life,” Shapiro said, “But when the actor took off his belt, rolled up his sleeve, and wrapped his belt around his arm, they got it better than I did.”

The professors also addressed the lack of Shakespearean education in American middle schools and high schools. Both professors agreed that the only way for students to understand Shakespeare is by performing it and bringing it to life.

In addition, McWhorter and Shapiro agreed that watching plays more than once increases comprehension, giving credit to technology for improved accessibility. With the advent of the Internet, people have opportunities to watch Shakespeare over and over without having to pay for high-priced tickets. For Shapiro, the sheer ability for so many people to experience Shakespeare has brought out a fantastic new variety of aesthetic responses to the plays.

“Some people might want to hear the music of Macbeth and see the stage imagery of a cool production,” Shapiro said, “and I might simply want to follow this weird plot.”

While Shakespeareans may always be divided by the idea of translation, they find a common ground through their love for the playwright and the ability of his work has to move people. The debate may go on but at least “Shakespeare in Translation?” has found a way to make the discussion accessible to everyone.

“I like that we’re doing these outreach events because when elitism is brought up, it ruffles some feathers but these feathers should be ruffled,” KCST President Rose Meriam, CC ’19, said, “These kinds of events remind people that Shakespeare exists and it’s something we should still be talking about, not keeping for $250 shows.”