90,000 works of African art reside in France. The Art, Theft and Restitution roundtable opened up a debate on museums’ colonial plunders.

90,000 works of African art reside in France. The Art, Theft and Restitution roundtable opened up a debate on museums’ colonial plunders. 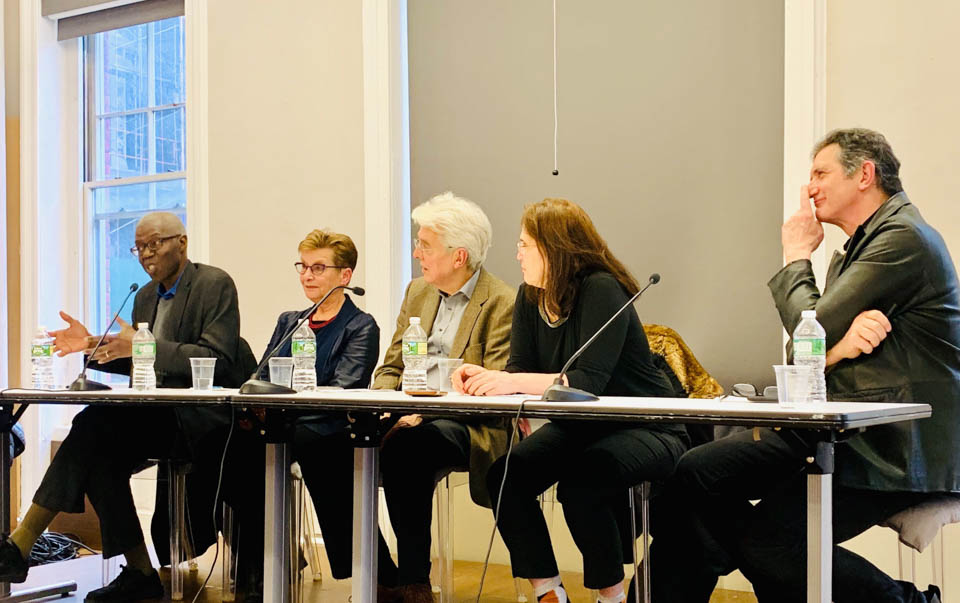 The roundtable Art, Theft and Restitution took place this past Friday, April 5 at the Maison Française Buell Hall East Gallery.

On Nov. 28, 2017, French President Emmanuel Macron called for the “temporary or permanent restitution” of objects of African cultural heritage that reside in French museums during a speech at the University of Ouagadougou in Burkina Faso.

A year later, scholars Bénédicte Savoy and Felwine Sarr delivered a report commissioned by Macron that established a potential framework for the return of African art to the sub-Saharan African countries from which they were taken forcefully. The report took the art world by storm, causing museums in France to either rethink or adopt a defensive stance on their policies.

Inspired by these recent events, Columbia professors Andreas Huyssen, Villard professor of German and comparative literature, and Marianne Hirsch, William Peterfield Trent professor of English and comparative literature, moderated a roundtable in order to discuss, in the words of Huyssen, the “huge questions that go way beyond the report.” As part of their collaborative University Seminar on Cultural Memory, the roundtable Art, Theft and Restitution took place this past Friday, April 5 at the Maison Française Buell Hall East Gallery.

Hirsch also mentioned a New York Times interview with Souleymane Bachir Diagne, chair of the department of French and Romance philology at Columbia, and two other scholars as a source of inspiration for the roundtable.

“[The report] concerns the U.S. as well. The New York Times article actually had an artist and a curator from New York who had that discussion with Bachir Diagne, so we thought New York is a good place to have this conversation,” Hirsch said.

Although Savoy and Sarr will join Bachir Diagne at a conference in the fall to discuss the report, sponsored by the Institute of African Studies, the roundtable served to open up the debate about restitution at Columbia and, as Huyssen said, to “forge new relationships for the future” by providing various perspectives on plundered art and museum practices around the globe.

In addition to Bachir Diagne, the roundtable consisted of Ariella Azoulay from the comparative literature and media studies department at Brown University and Brian Wallis, curator for the Walther Collection and former director of the International Center of Photography. The speakers discussed their own approaches to the subject of restitution and provided valuable insights in a conversation with the moderators and audience.

“What is restitution?” Huyssen said. “What are reparations? What role does memory play in these cultural kinds of debates? … How does one decolonize a museum?”

Bachir Diagne, Azoulay, and Wallis addressed the questions and controversies by defining key concepts in the report and providing essential historical background that both clarified and complicated the idea of restitution.

Although Macron’s speech at Burkina Faso was the first time he “spoke unambiguously about the need for restitution,” Bachir Diagne noted that restitution is a long-standing issue. It is one that needs to be considered in colonial contexts to help us “understand the violence of taking these objects in the first place.”

Bachir Diagne also implored the attendees to ponder what it means to “resocialize” an object once repatriated, since, apart from the country it was taken from, that object may have “grown roots” in the country where it currently resides.

Azoulay introduced a new way of thinking about our role in the restitution of art by establishing that “we”—the “inheritors of privileged access to plundered documents and objects”—need to critically engage with not only the report but also the “existing claims and rights to and in objects.”

She ascribed many Eurocentric museums’ lootings to misconceptions about these rights or the “triple failure of the imagination created by imperial plunder” that ultimately leads to a reduction of their meaning. Azoulay expanded on the colonial contexts of objects by explaining how forced migration and ecological lootings were also part of the plundering of artwork and should be considered when devising the possible reparations included in restitution.

For Wallis, museums are “under siege globally,” but many protesters have sought to not blame anyone and instead “point out misplaced moral views dominating museums.” Wallis reinforced how Eurocentric museums have assumed that they can speak for previously colonized countries, propagating “ideological narratives.”

In terms of restitution, he questioned whether these narratives would be reconstructed or reinvented in new societies and stated that restitution should “reanimate mummified uses and meanings of objects.”

The speakers at the roundtable also addressed doubts the audience had about returning art to repressive regimes and whether governments should intervene in people’s interactions with art in their daily lives.

In all of their responses, they reminded attendees to think about, question, and reflect on the colonial backstories of the art one admires at museums and the complex issue of restitution in France, the United States, and beyond.