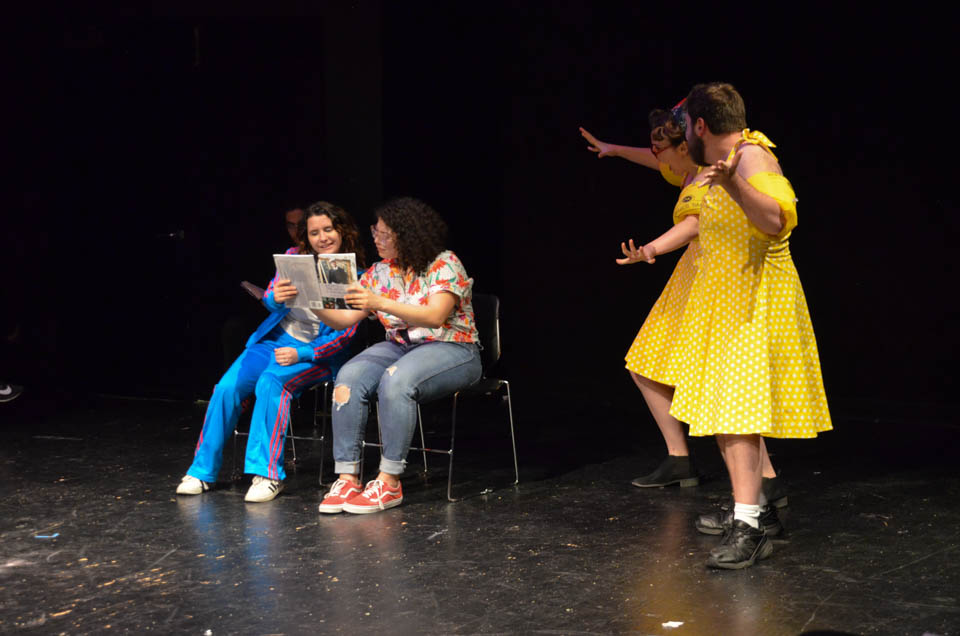 Latenite's skits were clever and topical but never veered toward pretension.

By the end of one 10-minute skit, Timothée was kneeling on the ground stuffing dollar bills frantically into his mouth while simultaneously JUUL-ing. Moments before, a five-year-old had snorted a line of Kool-Aid-looking powder from a table. The skit was a little all over the place, but perhaps best summed up by the line, “Who needs family when you have AirPods?!”

This past weekend, from April 11 to 13, Columbia’s Latenite Theatre group put on three pun-filled and peppy performances of a compilation of eight short skits, all written by students, in the Lerner Black Box Theatre. Cast members were encouraged to stand and sit out among the audience when not performing, adding even more energy to the already hyped atmosphere.

Latenite’s ability to not take itself seriously made it all the more fun for members of the audience. The skits were clever and topical but never veered toward pretension. Since the group’s founding in 1995, Latenite has produced student work that puts political correctness and manners aside for the enjoyment and creative expression of the community.

Cringey aspects of fuckboi culture were tackled head on in “How Timmy Became Timothée,” written by Paisley Smith, BC ’21, and directed by Smith and Leo Bevilacqua, CC ’19. The skit followed the life of Timmy, a five-year-old boy played by Jared Rush, CC ’21, who, after receiving Apple AirPods for his birthday, spiraled out of control, eventually rebranding himself as “Timothée.”

Some of the skits called on a more nuanced and perplexing humor. “Please Stop,” written by Dylan Dameron, CC ’20, and directed by Ethan Woo, CC ’20, and Xander Browne, CC ’19, began with a conservatively dressed older woman, played by Maura Ward, BC ’21, standing in shock as eight people dressed in white pranced giddly onto the stage. The prancing group then split into pairs and began indulging in what can only be described modestly as public displays of affection.

The whole thing was so ridiculous—four couples entwined in sexual activities and one grandmother hunched center stage—that the audience couldn’t help but laugh throughout. Eventually, Ward shouted, “Please Stop!” flipping the skit onto the next scene which, in its entirety, comprised of the group of white-dressed actors scrambling to stack a set of metal chairs.

“Fly Story,” written by Alex White, SEAS ’21, and directed by White and Francisco Alvidrez, CC ’19, was a 15-minute setup for a perfectly cheesy pun. The play began in the style of an old-timey silent film, chronicling the long-term hostile relationship between a human, Savannah Pearson, CC ’20, and the flies in her home, played by Lena Kogan, BC ’19, Fiona Flanagan, BC ’21, and Chris Zheng, CC ’19.

Together the flies managed to avoid all attempts by the human to swat them down and eventually fell in love. The skit then skipped to 10 years later, when the human returned for her revenge on the snack-thieving flies. After killing one of the gluttonous flies, the human turned to the second fly.

“It looks like your fly is down,” Pearson said, turning to face the audience.

Other highlights from Latenite’s collection of skits included: words of wisdom from a snake, who quoted lines from Rousseau to a passing jogger, who himself then turned out to be Karl Marx; a steamy makeout session between a scientist and an android woman; and the final skit, written and directed by Mia Simon, BC ’20, portrayed an all-too-familiar, all-too-awkward, middle school dance.

This spring’s anthology was scattered with hit-and-miss jokes but was overwhelmingly received with laughter. Clever script writing paired with enthusiastic actors gave the performance a casual, but confident ambiance.

It was unpretentious and, most importantly, sprinkled with a shameless naughtiness shared by some audience members’ approving cheers and giggles. With their final bows, the Latenite cast transformed the stage into a dance party, with members of the audience hopping down to congratulate their peers and join in the fun.