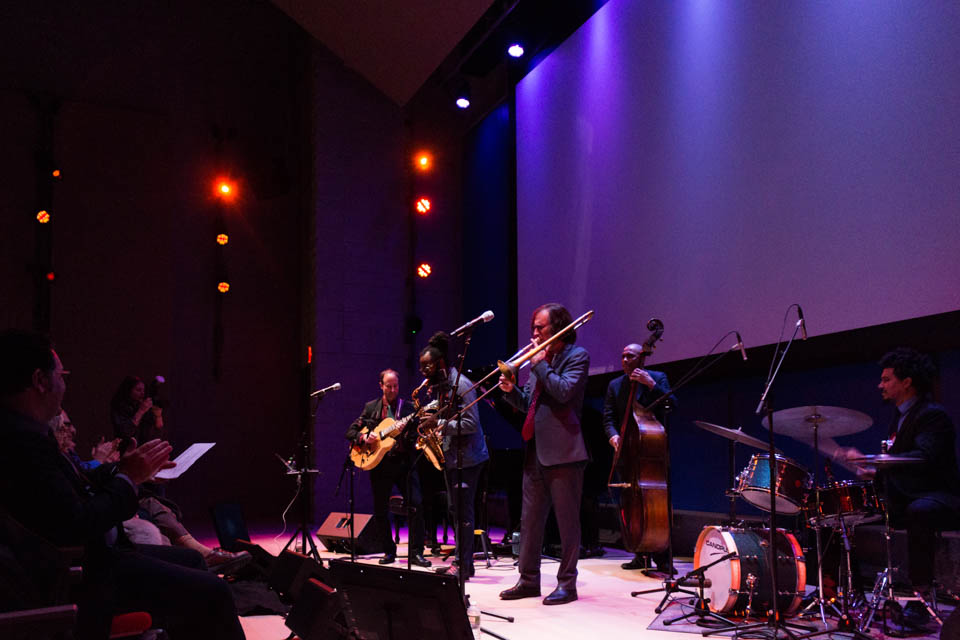 Part neuroscience lecture and part concert, Jazz and the Neuroscience of Decision Making was hosted by Columbia’s Zuckerman Institute.

The sound of a neuron’s crackling electrical activity resounded in the auditorium as the monkey came to a decision.

Then, after this pre-recorded demonstration of how the mammalian brain makes choices, jazz musicians picked up their instruments, and with their own neurons whirring, they improvised a swinging song.

Part neuroscience lecture and part concert, Jazz and the Neuroscience of Decision Making was hosted by Columbia’s Zuckerman Institute on Monday night. The event, held at the Forum on Columbia’s Manhattanville campus, featured Michael Shadlen, professor of neuroscience and jazz guitarist, in conversation about neuroscience and performing jazz with Chris Washburne, director of the Louis Armstrong Jazz Performance Program, and Helen Sung, pianist, composer, and the Zuckerman Institute’s first jazz artist-in-residence.

“Question and answer” is a mode of thinking—how the brain interrogates the world and processes information. It is also a musical motif. Shadlen pointed out that this is not a coincidence: Thinking and playing music, especially jazz, are similar acts. He turned away from his lecture slides and picked up his guitar to show the audience what he meant, assisted by a band of six other jazz musicians.

Alto saxophone player Jason Marshall kicked off the musical conversation with a joyously inquisitive solo, asking enough musical questions to inspire a dissertation. Shadlen eagerly responded, brightly plucking the strings of his guitar. Sung presented the most convincing counterargument on the piano, her hands flying across the keys at the speed of thought.

On the trombone, Washburne gave his verdict with drawn-out, declaratory notes. Ugonna Okegwo piped in on the bass, asking a new set of questions in deep, muted tones. All the while, Charles Goold drummed with pensive urgency, keeping the musical roundtable in rhythm.

When the song ended, Washburne mentioned that this group of musicians had never before played that song together. The audience applauded, but Washburne brushed off the praise.

“Thank you for that applause, but actually, we’re just doing what you do daily. We all improvise. We improvise every single day of our lives,” he said.

To sway any skeptics in the audience, Washburne offered some pretty damning evidence that we all live our lives on the fly.

“You’re all alive. If you did not improvise, you’d be dead,” he said.

Washburne pointed out that musicians don’t work jazz—they play it. He insisted that the key to success in life, as in jazz, is not to work but to play.

“This is one of the great lessons that jazz has to offer. What would it be like tomorrow when you go to work if you went to play instead?” Washburne said.

Connecting the discussion more explicitly to neuroscience, Shadlen explained that time is the essence of jazz and cognition. Over time, neurons show persistent activity as they accumulate evidence toward making a decision. It is this persistent activity that frees a person from attending to their body’s moment-to-moment needs, enabling thought, exploration, and play.

To demonstrate this phenomenon, Shadlen played the recorded sounds of a neuron’s electrical activity in a monkey’s brain as the monkey was fed visual stimuli and had to decide where to look. As the monkey processed stimuli to come to a decision, the audience could hear the crackling of intensified neural activity.

In an interactive game, Shadlen asked the audience to clap when they saw a dot flash on the projector screen. While the dots initially flashed at consistent intervals, there were a few dots that flashed unexpectedly early or late. The audience was thrown off by these surprises, clapping out of sync.

Shadlen explained that their brains had been predicting the dot would flash at a particular time based on statistical evidence that the brain automatically computes and accumulates.

"You weren't expecting [the flash] to go fast. So your brain is timing and anticipating, and you were slow," Shadlen said.

In this discussion of the brain lies the beating heart of jazz. Shadlen and Marshall concurred that swing, suspension of resolution, and tension and release are key elements of what makes listening to and playing jazz music so compelling. These elements rely on a consistent beat that informs the brain’s predictions, only for the music to then upend the brain’s expectations.

“When you listen to [my colleagues] improvising, you'll hear them taking you on rides. They're not going to the expected note. I lose my breath when I hear them,” Shadlen said.

The event concluded with one last rollicking song as the audience reveled in the science at work—or rather, at play—in the music.