Mexican and Greek mythology were blended in “The Hungry Woman: A Mexican Medea,” an excellent and haunting tale of living in exile

Mexican and Greek mythology were blended in “The Hungry Woman: A Mexican Medea,” an excellent and haunting tale of living in exile 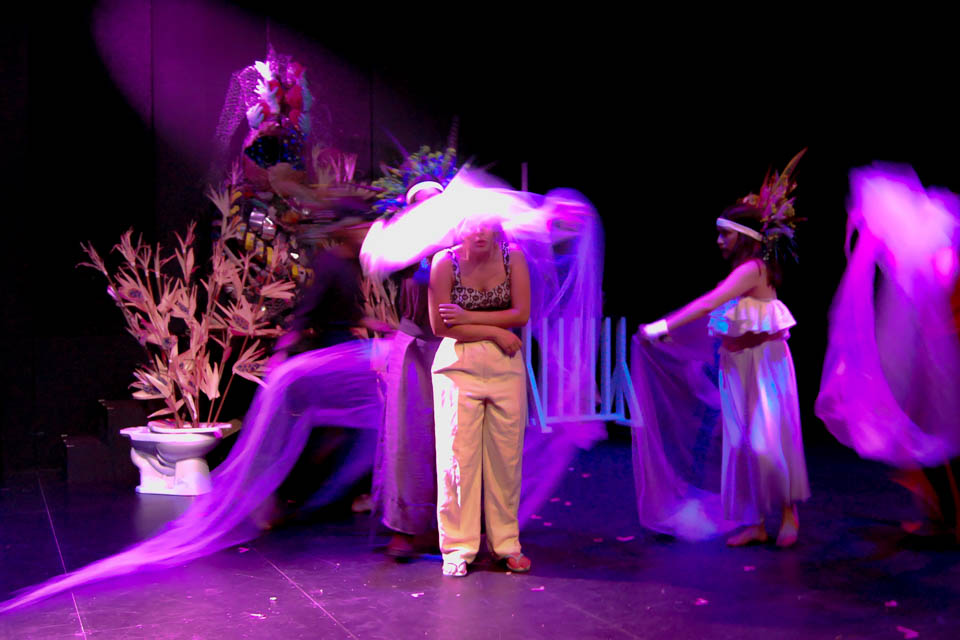 “The Hungry Woman,” is a play composed of stories both ordinary and legendary.

There is a moment in the second act of the play “The Hungry Woman: A Mexican Medea,” when Huitzilopochtli, god of the sun and war, is born. After birth, he fights the moon to defend his mother, the earth. A few moments later, Medea stares at the moon, pining for her lover.

This reenactment of myths could only be accomplished in “The Hungry Woman,” a play composed of stories both ordinary and legendary. Carried by a diverse cast, the production sought to showcase the struggles of LGBTQ minorities across cultural boundaries.

The production was presented by the Columbia University Players and directed by Rylee Carrillo-Waggoner, CC ’19, a student in the Institute of Comparative Literature and Society. Carrillo-Waggoner is herself Chicanx and felt drawn to the script by feminist theorist and activist Cherríe Moraga, due to its focus on the failings of the Chicano Movement, a Mexican-American civil rights movement from the 1960s.

“[The play] focused on what it means to exist in a space of marginalization, to exist in the borderlands,” Carrillo-Waggoner said. “It focused on the people who were still forgotten after the Chicano revolution. Women, queer people, and anyone not a cis-male are forgotten. Their rights, their existence is not fought for.”

The plot of the play centers on a group of exiles from a fictional reimagining of Mexico and the southwest United States called Aztlán. This name comes from the ancestral home of the Aztec people, but the country in the play is new and distinct. The society is patriarchal and homophobic, forcing the main character Medea, portrayed by Duda Penteado, CC ’21, to flee with her loved ones.

Medea is a reimagining of the character from the Greek myth of the same name, who famously appeared in Euripides’ play “Medea.” In the Greek play, Medea kills her children as revenge for their father’s betrayal.

In this production, Medea is a Chicanx woman forced into exile from her home after being outed as a homosexual. In the climax of “The Hungry Woman,” she kills her own son in a repetition of Euripides’ play.

The story is delivered in flashback after the murder. As a result, Medea’s emotions are erratic, and Penteado gives herself entirely to the role, walking the fine line between irrational and insane, switching quickly between the two. The burden extends beyond the character of Medea, however, as Penteado also has to embody other figures from mythology, such as La Llorona, the weeping woman, and Coatlicue, the Aztec earth goddess.

Other characters have similar double roles. Avegail Marie, CC ’19, played Luna, Medea’s partner and the reason she fled Aztlán. There is tension between them over the upbringing of Medea’s son Chac-Mool, played by Mario Garcia, CC ’21.

While playing Luna and Chac-Mool, Marie and Garcia have a peaceful friendship. Yet, the actors double as Coyolxauhqui and Huitzilopochtli, the moon and sun gods, respectively. In stark contrast to their affection as Luna and Chac-Mool, as gods, they fight over the fate of the earth, as choreographed by Assistant Director Kai Morsink, CC ’19.

Since these central actors have so many parts, the production relied on the strength of the performers. Fortunately, the performers were up to the task; Marie especially had powerfully subtle moments of conflicting emotions, their face and voice wavering between sorrow and love. Penteado verged closer to the bombastic, but it fit the nature of her character.

The set of the production was as intricate as the performances. The scenes took place around a central altar to Coatlicue, with a mixture of minimal props and stage dressings. One such dressing was a wooden frame with vertical wooden bars, which functioned as a door, jail cell, and mirror across the show, being moved into place by the actors as needed.

There were slight drawbacks to the production. The set, while varied and intelligent, took time to reset between scenes. This may not have been an issue for a shorter performance, but with an over two-hour runtime, these breaks added up.

With the exception of Shaundin Jones, CC ’20, who portrayed various prison guards and a warrior’s spirit, most of the supporting cast failed to match the performances of the main cast. As spirits, nurses, and other love interests, the supporting characters felt merely functional in a play with otherwise dramatic personalities.

The production faced a tall task. It needed to weave together traditional Mexican folklore, Aztec mythology, and Greek legend with compelling performances around repressed identities. Fortunately, the production found success. For “The Hungry Woman,” the eyes were not bigger than the stomach.

Correction: A previous version of this article misgendered one of the actors. Spectator regrets the error.