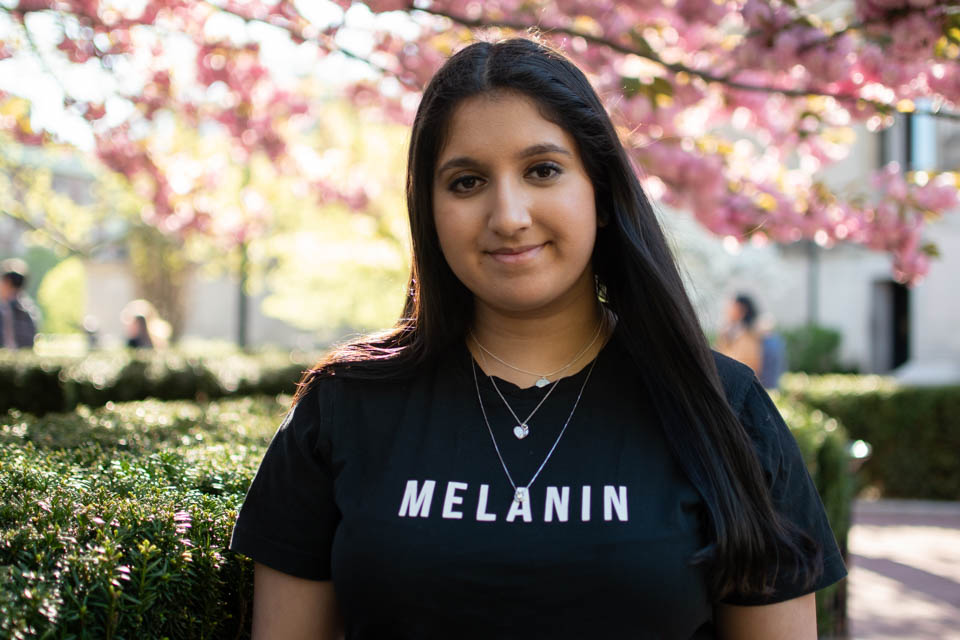 Zehra Naqvi, CC '21, uses the fashion brand she started with her sister Sophia Naqvi, CC '23, to empower women of color.

“Beauty has no skin tone.” “My culture is not your costume.” “Eliminate girl hate.”

These bold, empowering messages can be found on T-shirts designed by Zehra Naqvi, CC ’21, and her younger sister, Sophia Naqvi, CC ’23. Zehra and Sophia launched their online fashion brand, GLO, when they were just 15 and 13 years old, respectively.

Zehra is a sophomore in Columbia College studying economics, and Sophia is a high school senior in Hong Kong, joining the Columbia community this fall as a member of the class of 2023.

While the Naqvi sisters grew up in Hong Kong, their Pakistani identity was essential in inspiring GLO’s creation. The sisters admired international trends and styles from afar, but were disappointed to find that there were no trendy teenage clothing stores in Hong Kong like Topshop or Forever 21.

At first, the sisters saw this as a simple problem of supply and demand—there was a high demand for trendy teenage clothing in Hong Kong, but no supply. Zehra and Sophia decided to start designing their own graphic tees to meet this demand, an idea which quickly grew into their future brand, GLO.

"The reason GLO went from 1,000 followers in April 2014 to 10,000 in July 2014 was because my sister and I knew exactly who we were targeting and how to market to people our age,” Zehra said. “Looking back on it now, I can't believe I realized all that. But I was just doing what I knew best, and I knew how to target customers because they’re just like me.”

The sisters divide up responsibilities within GLO based on their interests and strengths. Inspired by her grandmother’s custom-made clothes for religious holidays like Eid and family weddings, Zehra is more involved with the creative elements of GLO like T-shirt design and style. Sophia focuses on more technological aspects, like coding the website and arranging meetings with manufacturers.

After GLO’s initial success with graphic T-shirts, and as the sisters both matured into their later teenage years, they began to reconsider the direction of their brand. While researching for a high school project one day, Zehra stumbled on a documentary called "Dark Girls," from which she learned the meaning of the word "colorism.”

Zehra describes colorism as “racism within an ethnic group,” and she experienced it herself both in Pakistan and in Hong Kong. However, she was never able to name this phenomenon, and did not know it affected other people in her community because there was no discussion about it.

"We both experienced colorism; we just didn't know what the name of it was,” Sophia said. “I just have this distinct memory of being a three-year-old girl in my bathroom, and I was refusing to put this cream on. And the only way I would put it on is if someone told me it would make my skin lighter."

Like her sister, Zehra noticed colorism especially with the popular beauty brand Fair & Lovely, a company that sells skin-whitening and skin-bleaching products to lighten darker skin. She was confused about the lack of dialogue surrounding issues of colorism and wanted to do something to promote thoughtful discourse within her community.

"Initially, the reason why empowerment was so important to me is because within my own community, I felt like there needed to be a discussion about the things that exist that systematically put some of us at a disadvantage for things that shouldn't. I think that colorism was definitely one of those things,” Zehra said.

Inspired by these experiences, Sophia and Zehra decided to shift GLO’s platform into one centered on advocacy. They wanted to encourage people to be comfortable and confident in themselves, so they launched GLO’s empowerment campaign in 2016. For Sophia, the empowerment campaign would not have been possible without her sister as her partner.

“I’m not sure if I had been working with somebody else if we would've even started the empowerment campaign,” Sophia said. “I think our experiences with discrimination that we faced, the social issues that we saw growing up in Hong Kong, being Singaporean but also being Pakistani, I think all of those factors together really impacted our interest in social justice, and that’s what caused the empowerment campaign to come to fruition.”

The empowerment campaign features a host of T-shirts with bold, inspiring messages, usually printed in large capital letters. The two shirts from the campaign that Zehra feels most proud of are the “Melanin” T-shirt and the “My culture is not your costume” T-shirt.

Some of the shirts from the empowerment campaign are meant to call out issues directly, like the “Decolonize your wardrobe” T-shirt or “Dark skin is not a crime.” Others, like the “Melanin” T-shirt, are simply designed for people to take ownership of themselves and their identities.

“Fashion is so intricately linked to the idea of identity, and fighting for these issues is something that people do because they identify with them,” Sophia said. “What you wear makes a statement, depending on where you are, depending obviously on what you wear. So our motto is to make a statement without making a sound, and that’s just what we want our T-shirts to do."

Zehra and Sophia want to continue developing GLO to empower more people, give others a voice, and promote discourse. GLO’s newest development has been GLO Hub, an online content creation space designed to give aspiring, underrepresented entrepreneurs a platform to express their ideas. The Naqvi sisters have accomplished so much already, and they plan to continue empowering their communities when they are together in New York City next fall.