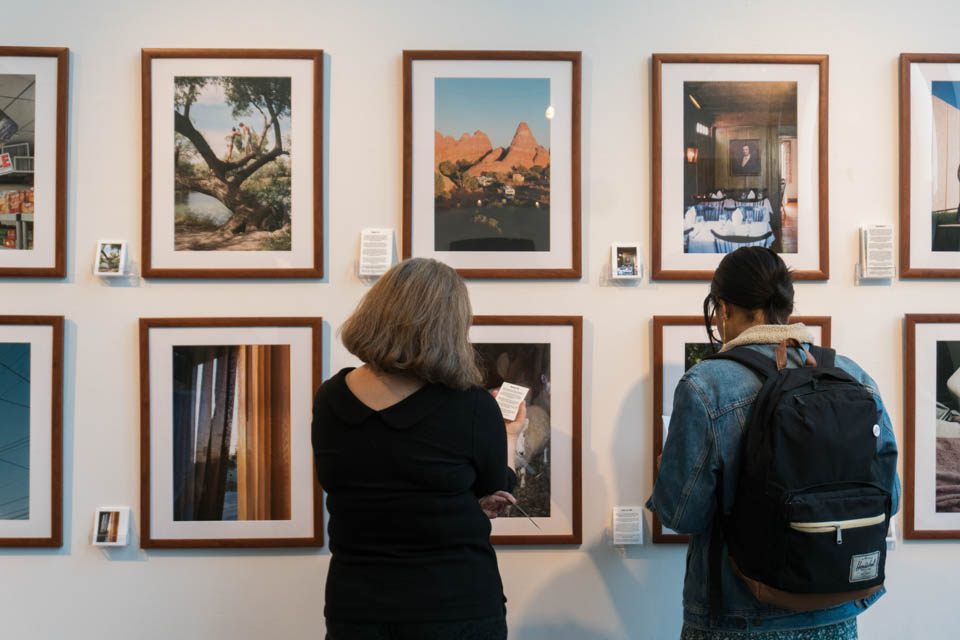 The Barnard Visual Arts Thesis Exhibition, “Obvious Rectangle,” took place in the Louise McCagg Gallery on the fourth floor of the Diana Center.

Laughter, hugs, big smiles, and effusive expressions of pride from friends and family members poured out of the gallery space. Student artists stood by the final works they would produce at Barnard and answered questions as viewers drifted throughout the space and engaged with the art.

The Barnard Visual Arts Thesis Exhibition, “Obvious Rectangle,” took place on May 2 from 6 to 8 p.m. in the Louise McCagg Gallery on the fourth floor of the Diana Center. On display was a collection of works made throughout the school year by the 14 graduating visual arts majors.

The works shown in the exhibition were extremely diverse in medium, ecompassing photography, painting, sculpture, textile, and video. Students were given the liberty to display their artwork as they pleased. As a result, works were hung both framed and unframed on the walls, stuck to the floor, and suspended from the ceiling.

Greeting those walking into the space was the lengthy silk print of screenshots of Julia Girardoni’s personal iPhone camera roll, as it unfurls from the ceiling and spills onto the floor below. Her work also includes stacks of concrete iPhones and a concrete MacBook for which she created the molds and poured the concrete herself. Her work last semester was more heavily focused on fabric design, but through these new mediums, Girardoni, BC ’19, is looking forward to exploring the next step in her artistic career.

“It definitely feels like the beginning of more work that can be made. There’s still more possibilities to work out different ideas, especially with the concrete sculptures because I just started making those toward the end of the semester,” said Girardoni.

Next to Girardoni’s work was the cozy set-up created by Caroline Wallis, BC ’19, for the display of her photography. Two chairs and a table on a decorative rug face a wall of photos, providing respite for viewers and the option to take a seat while reading Wallis’s photo book. Each photo on the wall was accompanied by cards for viewers to take away from the exhibit, with the image printed on one side and information about the location of the photo printed on the other side. Wallis’s work traces her road trips across America and are accompanied by research on the location in which the photograph was taken.

Just outside the gallery space in the hallway, suspended from the ceiling hung the embroidery and textile work of Iris Wechsler, BC ’19. This work focused on embodiment, the physical inhabitation of the body, and the bodily interaction with social meanings and understandings. Although she is usually a painter, this past semester Wechsler decided to explore textile work and learned to embroider in order to produce the work displayed in this exhibition. In relation to her focus on social meanings, Wechsler relinquished control over her art at the exhibition.

“I don’t mind if people just take my work as a purely aesthetic thing. I think that my ownership over it ends now. Whatever meaning comes now is what it means to a particular people. My intention as an artist only matters up to a certain point. I think art at its core is about connection and I made this, but now it is the only point of connection they have,” Wechsler said.

Further down the hallway near the elevators were the drawings, paintings, and zines of Aurian Carter, BC ’19. These illustrations were self-portraits and studies of ancient objects in museums. Her work is a project in personal identity exploration and formation; Carter is Iranian American, and her work demonstrates her process of learning about herself as an Iranian woman in America and creating the language through which to express this process.

“I made these illustrations and prints and also put all the illustrations in a book because I wanted them to end up in a form where they could continue to spread knowledge that I learned from this process,” Carter said.

The show marked a special and significant time for these students as they prepare to graduate and move on from college. Reflecting on their final exhibition and undergraduate journeys, many students expressed feelings of gratitude for the artistic resources and opportunities available to them during their time at Barnard, particularly for the support of their fellow visual art majors. Like most endings, however, the exhibit was bittersweet as they also expressed sadness, longing, and hopefulness in regard to graduation.

“I definitely feel like I wouldn’t have been able to get to this point without the help and feedback from my professors and my friends and peers in this class. I definitely was only able to do this because of their feedback and their guidance, so having that community was really important. I’m going to miss having their support when I graduate, which is soon!” Carter said.