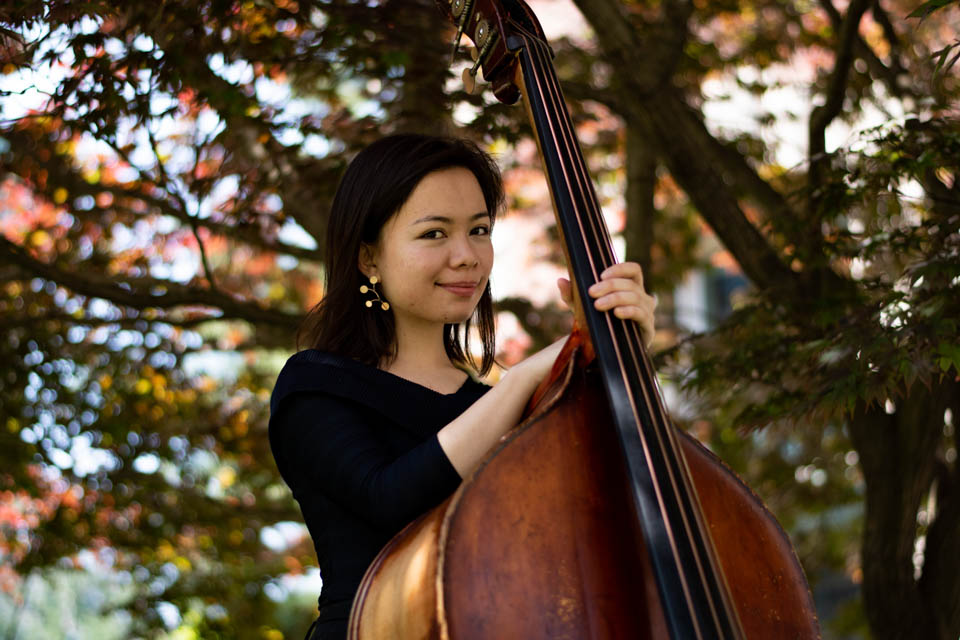 Kanoa Mendenhall, CC '19, learned how to play jazz on the bandstand.

Kanoa Mendenhall, CC ’19, is not the shades-wearing, tall, gaunt, man in a fedora that people usually imagine to be a jazz bassist. And yet, petite, slight, and quiet Mendenhall has been performing as one since she was a little girl. As she prepares to graduate from Columbia and begin her first international tour, she reminisces about the integral role that jazz has played in her life.

Mendenhall’s father was a jazz pianist who would always joke to his daughter that he needed a jazz bassist for his Monterey-based jazz band. When she was in her early teens, Mendenhall, who was primarily a cellist at the time, answered the call and picked up the bass. She never looked back.

Unlike most young music students, Mendenhall learned aurally rather than by the book. Her father taught her the basics and threw her in the deep end, allowing her to learn by performing with his jazz band.

“That’s how I learned most of the repertoire, by diving straight in on the bandstand,” Mendenhall said, recalling instances where she relied on her perfect pitch and sheer will to learn songs almost on the spot.

Mendenhall came into Columbia not necessarily set on becoming a professional musician, and for those who follow her work, it might come as a surprise how recent her decision to pursue music was.

“For me, it wasn’t until this past year. I never really knew what I wanted to do. I was open to options. I knew that I would always play music. I didn’t know it was going to be my career, my one path. I didn’t want to commit yet, but I definitely had a huge passion for it.”

Mendenhall started her college career as a part of the Columbia-Juilliard Exchange, but she felt that splitting her time between the two demanding institutions and the long treks up and down the 1 train carrying her bass prevented her from appreciating either school fully.

After deciding to commit solely to Columbia, Mendenhall became an East Asian language and cultures major. The switch challenged her in unexpected ways, as she recalled how academics at Columbia contrasted sharply with her musical education.

“I would just kind of get by with my perfect pitch,” Mendenhall said. “It just always felt natural to me, and here I am, [in a] completely different setting, [thinking,] ‘Oh god, I have to do something if I want to graduate.”

Choosing Columbia had its advantages, too. Her area of study not only allowed her to communicate more openly with her Japanese grandmother, but also gave her the chance to study abroad in Japan, where her only chance to practice the bass was to play at a local coffee/tea shop, which had a bass. As someone who was learning Japanese, Mendenhall appreciated how universal music was as a language.

Mendenhall grew up with her father as her primary instructor, but at Columbia and during her time at summer music programs, she has found mentors and teachers who have helped her get to where she is now. Mendenhall credits Victor Lin, who is currently pursuing a doctorate in music education at Teachers College, with helping her get over her own imposter syndrome. She met Lin first at Stanford Jazz Workshop and has reconnected with him at Columbia.

“He was really the first person who made me feel like I could actually play this music,” Mendenhall said. “I knew that I could play this instrument, and I was pretty good at it. … I would get into these honors ensembles and get these awards and things, but I never felt like I deserved them, somehow. ... He told me, ‘No, you are very good, and you’re one of the best musicians I’ve ever met.’ He gave me so much support.”

Starting this summer and throughout the next year, she will be touring the world with artists like Joel Ross and Maria Grand, with whom she had worked with in the past. Over the years, they have gotten to know each other through gigs, calling each other up when they needed someone to fill a part.

Despite her own success and improvements since she first started playing, Mendenhall acknowledges that there are still far too few women in jazz. One day, she hopes, the industry will reach fifty-fifty parity.

With a full undergraduate schedule and performance calendar, it makes sense that in her spare time, Mendenhall seeks a bit of quiet, preferring to spend her free time strolling through Riverside Park. But this doesn’t mean that she wants to slow down. Following her tour, she is considering a graduate degree from the Manhattan School of Music just down the street. For Columbia’s community, one can only hope that Mendenhall returns to perform again in Morningside Heights.