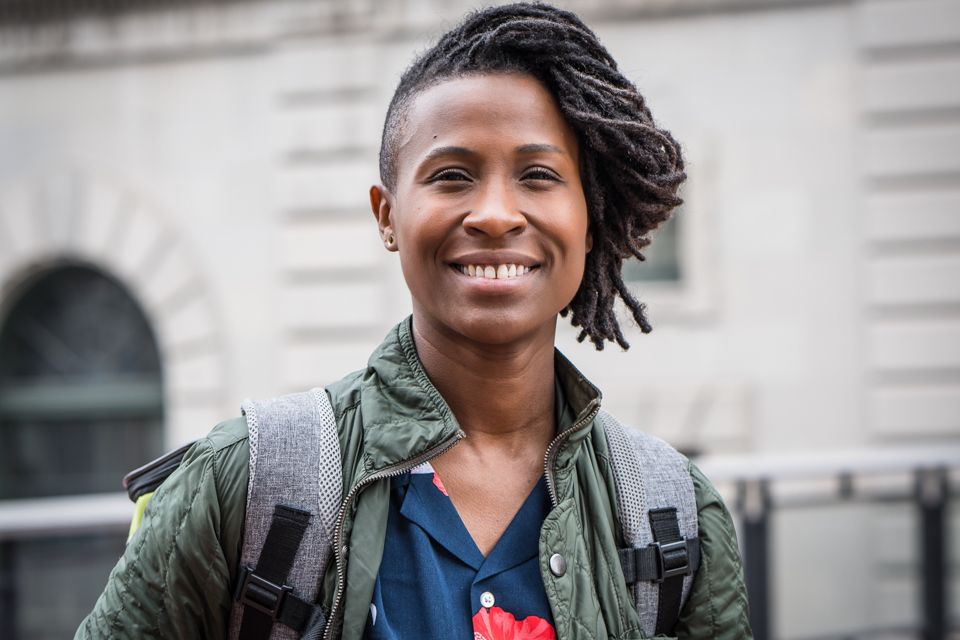 Woodruff decided to pursue a degree so that she could work at record labels and ultimately give back to under-resourced communities.

After having a peculiar desire for the recorder in elementary school, learning to play 10 instruments, performing in the Backstreet Boys’ tour band, and so much more, Sondra Woodruff, GS ’19, found herself in front of the gates of Columbia in 2016 to get her bachelor’s degree.

Daughter of a flutist and a saxophonist, Woodruff decided to pursue a degree after years of following various career paths so that she could work at record labels and ultimately give back to under-resourced communities. During her time at Borough of Manhattan Community College, where she first started taking classes, she received an invitation from the School of General Studies for an information session. Not knowing that such a school existed, she attended the session and grabbed at the opportunity in front of her.

Her passion for music began at a young age. She eagerly awaited third grade, because that was when her school gave students a recorder. However, she switched schools prior to getting one, which propelled her to play the flute instead. She would go on to master a total of 10 instruments.

Nowadays, she mainly plays the guitar and uses the piano for writing music. Once having played alongside the Backstreet Boys in a hockey arena in Germany in front of a crowd of 12,000 people, Woodruff has also performed a few times around campus during her time at Columbia, including appearing on The (Not So) Tiny Desk Concert, hosted by Natachi Mez, CC ’19.

At Columbia, she discovered a newfound passion for neuroscience, which began with Science of Psychology, a class she initially took just to satisfy a core requirement. From there her passion began to emerge, and she took Mind, Brain Behavior, a class recommended by a fellow neuroscience major she met at a meet and greet, later taking several more neuroscience electives. The knowledge acquired from these classes allowed her to see music in new light.

“Looking through that lens and how music affects the brain and affects your body, that’s really awesome and I didn’t have that before,” Woodruff said.

Columbia has shaped her new perspective on music in other ways, too. One such way is through the concept of “unpacking,” which is something the Core Curriculum and her Columbia education have taught her. Inspired by an assignment for her Music Theory III class, she recalled listening to a whole song cycle by Schubert in a small coffee shop in London during one of her spring breaks, something she would have never done if it wasn’t for what she had learned from her time at Columbia.

“What I have learned, you know, with the way that we’re taught to close-read and unpack things, I never really thought of doing that with music,” Woodruff said. “I think that’s what I’m taking with me as I create my own music, and work with other people, and helping them create music.”

Woodruff was also deeply involved with the community in GS, as she served as the VP of campus life for a year on the General Studies Student Council, wherein she planned various events. Her time on council has reinforced for her that there were ample resources available at GS for nontraditional students.

“The way that they support us really helps us [transition] into a traditional setting,” Woodruff said. “Most people have been out of school for five to 10 years, and the school itself supports you through various tutoring, various ways of just making sure that you have all of your resources. … I find the GS community to be very close because I can go directly to the dean of the school, no problem, and talk to her.”

As part of her effort to give back to the music community, she is planning to open a music facility with two of her friends next year, tentatively called Limelight. The facility will be a collaborative space for musicians and will host a range of activities.

Three years at Columbia have taught Sondra numerous skills and experiences which she could not have acquired otherwise. She is excited to move onto the next chapter of her life, taking what Columbia offered her and hopefully giving back what she gained through her passion for music.

“While I was in it, I was definitely stressed and I honestly thought that I was never graduating … then once I turned in and left my final final, I think my entire three years came back to me in reverse, and I realized that this experience is going to impact the rest of my life,” Woodruff said.

“I’m glad I went to Columbia,” she concluded, with a smile on her face.