Shaquan Nelson, SEAS ’19, on creating his own clothing label and how a turtle can climb a fence

Shaquan Nelson, SEAS ’19, on creating his own clothing label and how a turtle can climb a fence 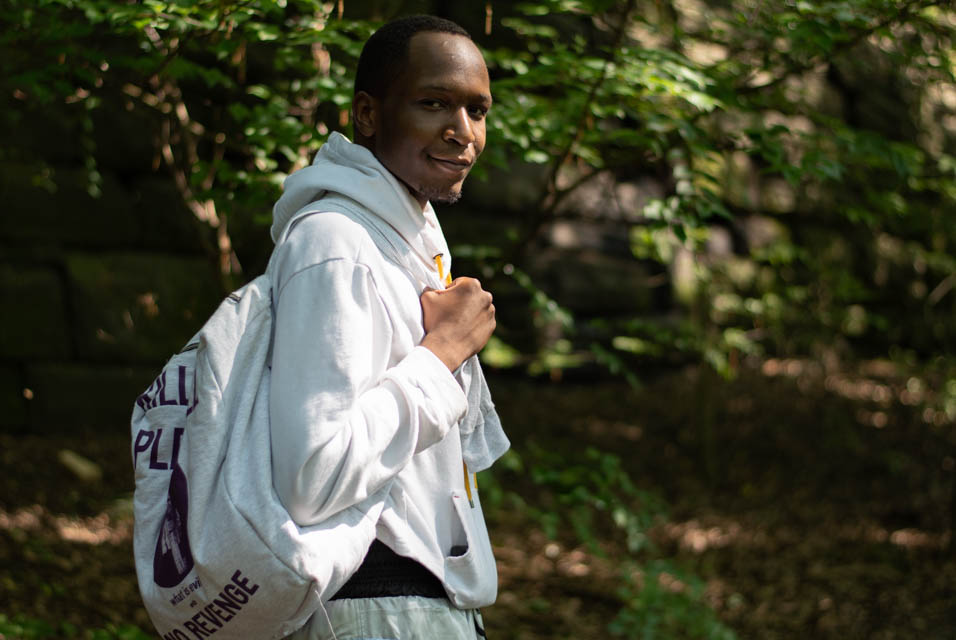 Working with a team showed Nelson that he was part of something that went beyond just himself.

Shaquan Nelson, SEAS ’19, takes a long pause when asked to describe his clothing label in one sentence. After turning the question over in his mind for a couple of moments, his face lights up and he says.

“If you see a turtle on a fence, don’t ask how it got there.”

Nelson explains that the only way a turtle could end up on top of a fence is if somebody helped it. He likens this feat of reptilian ascension to the assistance he has received in forming his clothing brand, Strange Fruit Conglomerate.

Nelson was inspired to create Strange Fruit Conglomerate while listening to the Chief Keef album “Thot Breaker” in the summer of 2017. Struck by the producer’s repetition in each song of the name “Turbo,” Nelson decided to look into the identity of the mysterious figure. “Turbo,” he learned, was just Chief Keef’s own producer name, as the rapper had been dropped by his label, Interscope. This gave him an idea.

“When [Chief Keef] was getting dropped from Interscope, he was trying to leave his label,” Nelson said. “And I did not like Columbia. I realized what I should do is sort of be like that: prepare to leave the label. Like, I should prepare to leave school. And how do I do that? I work toward something. I have a goal, and something that I really want to achieve—and then I remembered that I really liked clothes.”

That same summer, in 2017, Nelson discovered the Columbia MakerSpace while taking a summer class in Mudd. During his first visit, he was welcomed by its manager, Mohamed Haroun.

“[Haroun] really was the person who helped me get a start,” Nelson said. “He helped me get all the access to resources and space that I needed, and that was just incredible, especially in times when I couldn’t defend myself or fight for myself.”

Nelson learned skills like sewing and embroidery in the space, and thus Strange Fruit Conglomerate was born. He came up with the idea for the name by listening to another rapper, Joey Bada$$. In his song “BABYLON,” Bada$$ raps, “Nowaday they hangin’ us by a different tree / Branches of the government, I can name all three / Judicial, legislative and executive.” This allusion to the role of the government plays in oppression reminded Nelson of another work of art.

“It brought me back to the poem ‘Strange Fruit’ and I was like, that is very true. What is oppressing people now is a lot of systematic things. That’s really where the name came from, from just like the acknowledgement of where we are at in society, and I think that that’s fine. Sometimes we need to acknowledge where we are so we can move forward,” Nelson said.

After learning design skills in the MakerSpace, Nelson began to assemble his team. Working with them taught him what it means to listen to others and to grow as a group. It showed Nelson that he was part of something that went beyond just himself.

“I think having my own brand was mostly realizing that my brand is so much bigger than me. It was like, people are going to come in and change my vision and that’s good, that’s acceptable, and that’s perfectly okay. … My brand was never supposed to be for just me. It was called a conglomerate for a reason,” he said.

Nelson now uses a manufacturer to make his clothing, rather than making everything himself as he once did. Along with his teammates and Haroun, he credits his close friend Christian Joseph, SEAS ’19, with aiding his personal and professional growth. Joseph has his own label, NO REVENGE, and the two have worked side by side cultivating their brands and their appreciation for clothes. Joseph helped Nelson meet fashion designer Kerby Jean-Raymond, whom Nelson refers to as his teacher and whose menswear label, Pyer Moss, Nelson interned at in the fall of 2018.

Support in the clothing design industry, of which Nelson has received an abundance, comes in more forms than just monetary support.