Varsity Show celebrity Rachel Greenfeld, BC ’19, from start to finish

Varsity Show celebrity Rachel Greenfeld, BC ’19, from start to finish 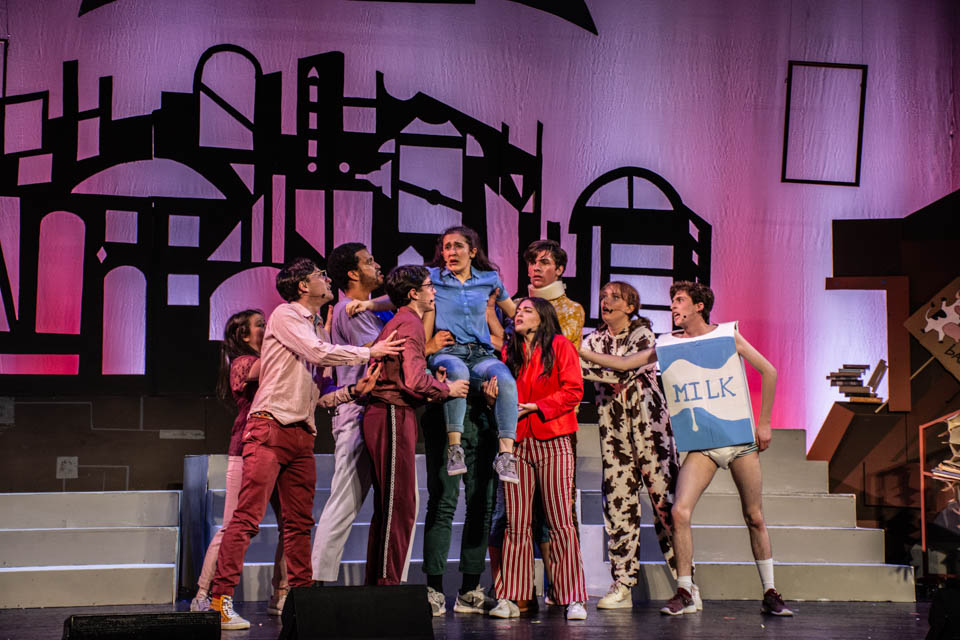 Greenfeld has been an actor in the Varsity Show performances for all four years.

“With energy, pizzazz, and candid hilarity, the unexpected jolts and quirky visages of Greenfeld captivated from start to finish.”

This excerpt is taken from Spectator’s review for XMAS!13, one of the many shows that Rachel Greenfeld, BC ’19, stole. During this show in particular, and unbeknownst to the audience, Greenfeld was unexpectedly forced into an impromptu soliloquy.

“[I had] to improv alone onstage for 6+ minutes—my literal worst nightmare—during XMAS!13, stalling while a sound issue was being resolved backstage,” Greenfeld said.

Throughout her college career, Greenfeld has entertained Columbia’s campus and, time and time again, proved her value to its theatrical community. While completing her major in psychology, Greenfeld has been an actor in the Varsity Show performances for all four years. In this time, she has also engaged in Barnard Theatre performances and the XMAS! annual show.

“I’ve been a huge Kate McKinnon fan since high school and saw it mentioned on her Wikipedia page during a late night Google deep-dive,” Greenfeld said. “As soon as I got into Barnard, I knew that I wanted to get involved with Veesh!”

“Veesh,” for those unaware, is how the cool kids pronounce the Varsity Show—a Columbia theater tradition that has lasted for 125 years (since 1894). Veesh has taken a center stage in Greenfeld’s Columbia career and has given her—to use that same buzzword—community.

“[My favorite part of Veesh was] definitely the people.” Greenfeld said, “It’s such an intense process, but it has left me bonded for life with some of the greatest pals I could ever ask for.”

Coming from a performing arts high school where she majored in theater, Greenfeld was determined to get involved in the theater scene in New York and swiftly did. However, the determination has yet to fade, and, when asked what might be in the works after graduation, the star responded, “Staying in the city to chase this crazy dream! But also working a whole slew of survival jobs to pay the bills and embrace #adultlife.”

Her temporary job after graduation will see Greenfeld take on her most undercover role yet as a boxing club receptionist. Even as a short-term job, Greenfeld said she loves exercising and is enthusiastic to be working in the fitness club.

Although her road to stardom in the future might be paved with thickets and brambles, the actor views her Columbia experience as invaluable.

“It has certainly been a challenge, but I wouldn’t trade it for the world,” Greenfeld said. “I am so grateful for the opportunities that being in New York and at Columbia/Barnard have opened up for me, and I quite honestly don’t know where or who I would be without my time spent on this amazing campus and in this incredible city.”

One of these opportunities was the 125th Varsity Show “It’s a Wonderful Strife,” in which, as Spectator’s review described, “Greenfeld was characteristically charismatic, hopping up and down the stage, maximizing the theatrical space and, from time to time, completely changing the tone and feel of her voice, crackling into the microphone or offering a baby squeal.”

Her other major roles onstage came in the 122nd Varsity Show, “A King’s College,” as John Jay; 123rd Varsity Show, “A Tale of Two Colleges,” as former Barnard President Debora Spar; XMAS!11 “North Pole State of Mind,” as Noelle (wink wink nudge nudge); XMAS!12 “Tis The Treason,” as prosecutor Terry Rudolph; XMAS!13 “The XMAS! Factor,” as Krampus; and Barnard’s “Peer Gynt,” as both a pen and the Mother of the Groom.

Greenfeld will be sorely missed by the Varsity Show and Columbia theater, but the space is open for another thespian to step into her shoes. Offering one piece of advice to incoming students, Greenfeld looked to merriment.

“Try to enjoy yourself as much as possible!” Greenfeld said. “Whatever that means for you, prioritize your own happiness and make time for things that bring you joy.”