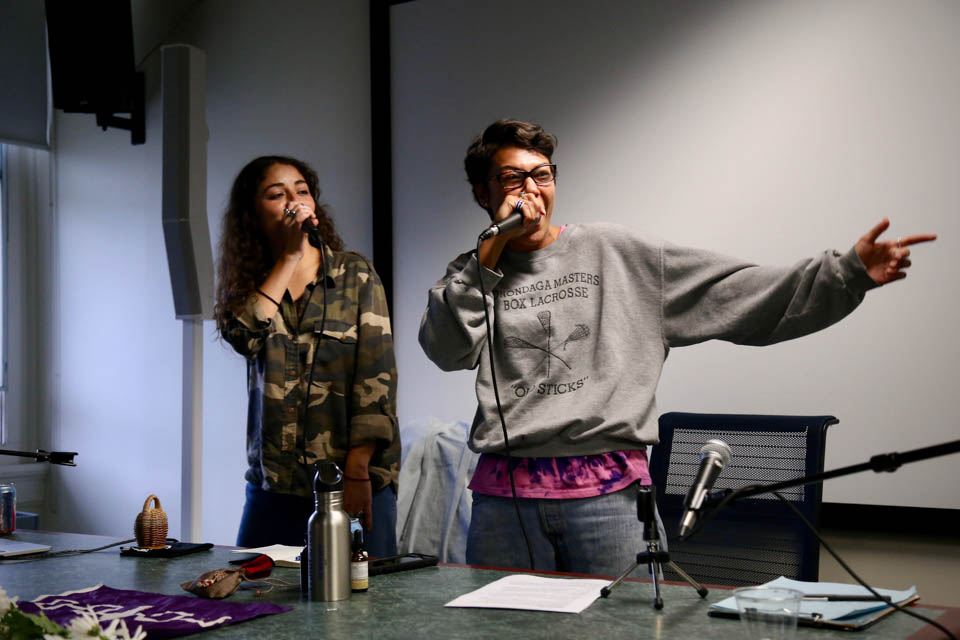 A conversation with the artists was followed by an impromptu performance and a Q&A session.

From stress relief to aiding with memory loss linked to Alzheimer’s and dementia, the therapeutic benefits of music play a vital role in personal health. However, the intersection of indigenous traditions and hip-hop shows that music can also heal cultural wounds.

Indigenous hip-hop rappers, producers, and activists Dioganhdih and Chhoti Maa were featured in a public event hosted by The Center for Ethnomusicology on Friday. Ethnomusicologist Lauren Amsterdam moderated a conversation with the artists, which was followed by an impromptu performance and a Q&A session.

Dioganhdih is a queer Haudenosaunee hip-hop artist and producer originally from the Akwesasne Mohawk territory. Their music delves into sexuality, gender identity, re-indigenization, and indigenous culture.

Chhoti Maa is a multidisciplinary artist from Guanajuato, Mexico based in Oakland, California. As a rapper, singer, and producer, her music centers on “decolonial living, red medicine, queerness, migrant empowerment, love, and the reconstruction of the womyn temple.”

Since meeting in San Francisco, the two artists have formed a musical partnership known for its multilingualism, energetic beats, and provocative lyrics. Most recently, the duo has collaborated on Chhoti Maa’s second studio album, Caldo de Hueso.

Both artists readily acknowledge hip-hop’s African-American origin. However, the genre’s political “roots of resistance,” as described by Dioganhdih, are also present throughout Native American history, making it a fitting platform for indigenous voices.

“For me, I’m continuing this legacy of resistance from my own ancestors and then meeting with Chhoti has been a powerful collaboration to find someone else who’s on a similar path and also in a similar medium doing similar work within the community. And we make dope songs together,” Dioganhdih said.

Dioganhdih and Chhoti Maa also touched upon the importance of healing traditions in their respective cultures and the way these traditions have shaped their artistry.

“I also think that we met through medicine too,” Chhoti Maa said, remembering a time when she miraculously recovered her voice before a performance after Dioganhdih gave her a special medicine.

In turn, Dioganhdih recalled their father’s affinity for plants and their medicinal properties. Chhoti Maa’s grandmother was known to her community as a bruja or “witch,” a term that Chhoti Maa explained was both admiring and derogatory.

Perhaps on a deeper level, these experiences shaped Chhoti Maa’s awareness of a common oral tradition and its connection to hip-hop.

“I think about oral tradition and hip-hop being part of that, being an indigenous practice that comes from the black community and what people call also the Latino community or what we can think also as indigenous people as well, or people of different lineages,” said Chhoti Maa.

Earlier in the discussion, she said, “I don’t know that I have many answers but I have little bits and pieces that I put together.” While Chhoti Maa’s humility highlights a daunting task ahead—trying to heal a fragmented culture with words—her lyrics nonetheless reach toward a solution.