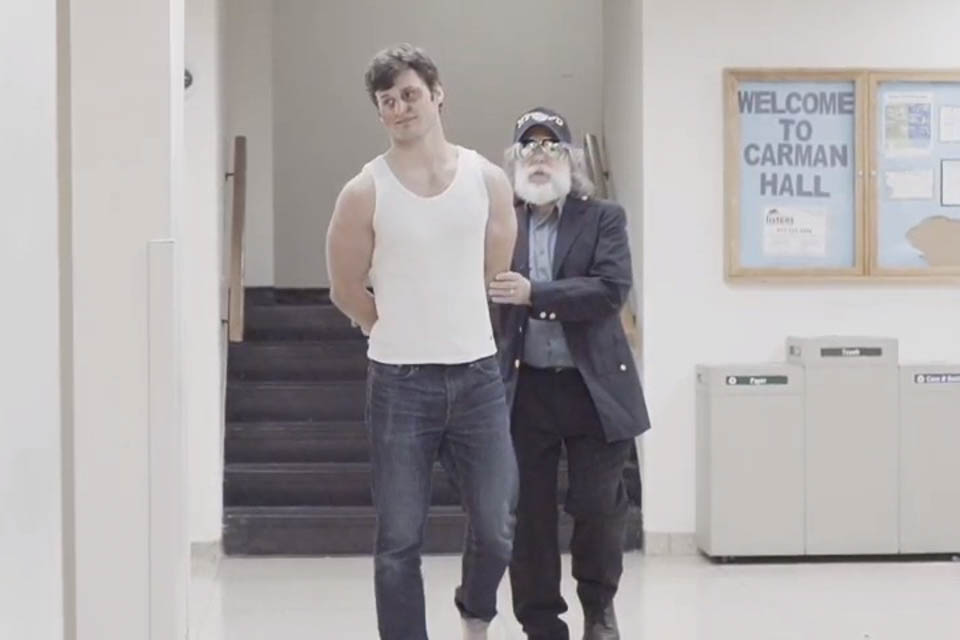 "Confessions of Drug Dealer" is a fictional, dramatized account of the rise and fall of a notorious campus drug dealer

“Confessions of a Departing Drug Dealer” is a fictional, dramatized account of the rise and fall of a notorious campus drug dealer who rose to fame in 2015 after publishing the details of his exploits in an anonymous Spectator op-ed of the same name.

The film is one of a long line of projects written, directed, and produced by recent graduate and film student Edwin DeJesus Jr., CC ’19, and stars Soren Shade, CC ’19, in the lead role along with a host of undergrad actors and actresses. DeJesus’ last film, “Kulafobie,” won second prize at the Columbia Undergraduate Film Productions 2019 film festival.

The movie itself is narrated from the perspective of the drug kingpin’s girlfriend, Elma. The man himself, Maximilian Woolworth (a name dripping with entitled upper-middle-class chauvinism), is introduced to the story as a bright-eyed, naïve young economics introvert who likely wouldn’t consider a night without brushing his teeth, let alone spearheading a sprawling criminal drug network. Before his downfall, Max was the picture of dignity and trustworthiness.

Max, however, quickly casts off his life of type-A study habits and academic dedication when his uncle proposes he take up selling hard drugs. With the promise of “everything you could ever want” and the flash of a few keys of coke, Max is forever transformed into a hard-partying, Adderall-blowing, vodka-chugging madman. He dedicates himself to an elevated philosophy of drug-dealing in which only “capable” students can do business—all in an apparent effort to preserve the overall health and safety of the undergraduate community.

Naturally, this foolproof plan falls apart when the New York Police Department invades the dorms and arrests the “bourgeoise” of King’s University (Max and his compatriots) in the middle of a rager awash with coke-blowing and twerking. Not to worry, however, for we’re told Max’s family has money.

The parallels between the original op-ed and the movie are strong. The film drips with the same haughty lack of self-awareness that the op-ed reflects. In the op-ed, the anonymous author on whom the character Max is based, describes the hundreds of products he sold as “fun-assisting substances” when referring to MDMA, cocaine, and Xanax.

The author claims that the liquor store clerk who doesn’t check IDs generates “much more risk than I ever do,” and says that MDMA gets a bad rap because street dealers cut the product, something Max “would never even think of doing in 1,000,000 years.” In an odd paradox, he even issues an aside directly to the parents of Columbia’s young and impressionable undergrad academics, saying, “Don’t worry, parents, your kids’ drug dealer is looking out for them!” The entire piece is stunning due to the bluntness of the author’s admission and the way in which he ultimately saw himself as some sort of shepherd for innocent students.

In the movie, Max conveys a similar self-aggrandizing image. Elma provides a voice of reason after Max’s enterprise begins to unravel. She pleads for Max to “quit acting like a psychopath,” and his first response is, “Honestly, what dealer actually looks out for his clients the way that I do?” Narration from the film also explains that Max would exclude customers he deemed “physically vulnerable,” seemingly as some misguided attempt to shield the impressionable youngsters on campus from sin. It seems clear that the movie makes a pointed effort to depict Max from the perspective that the audience saw him from in the op-ed, not necessarily from the one Max might have imagined himself: as a conceited, naïve, and surprisingly stupid Ivy League student, not an icon.

Though this portrayal is nuanced and unique, some other aspects of the film play on standard Columbia tropes. Wall Street is implied to be the enemy, as usual. The film includes a number of shots of an economics class in Havemeyer 309 in which Max learns the basics of supply and demand. The message here seems to be that market greed compelled this man’s transformation from saint to sinner.

The devilish activity of partying—portrayed in its most gratuitous and exaggerated sense in the film—is ultimately the downfall of Max’s budding academic career. Though there may be some Project X-style truth to that, the zero-to-100 nature of Max’s downfall seems hyperbolic at best. There are plenty of students on campus who have tried drugs at a party and didn’t subsequently skip all their finals and head straight to jail.

Overall, “Confessions of a Departing Drug Dealer” is a spotlight on a particularly prevalent Columbia story; one in which the forces of power and ambition push a student to test the limits of his own entitlement. It may be true that these factors come together here on campus better than at most places. However, to the student who may find the interplay of these subjects well-trodden and tiresome territory, “Confessions of a Departing Drug Dealer” is no confession at all—it’s just campus.

DeJesus plans to release “Confessions of a Departing Drug Dealer” later this month on his YouTube channel.

Correction: A previous version of this article misidentified the author of the op-ed. Spectator regrets this error.