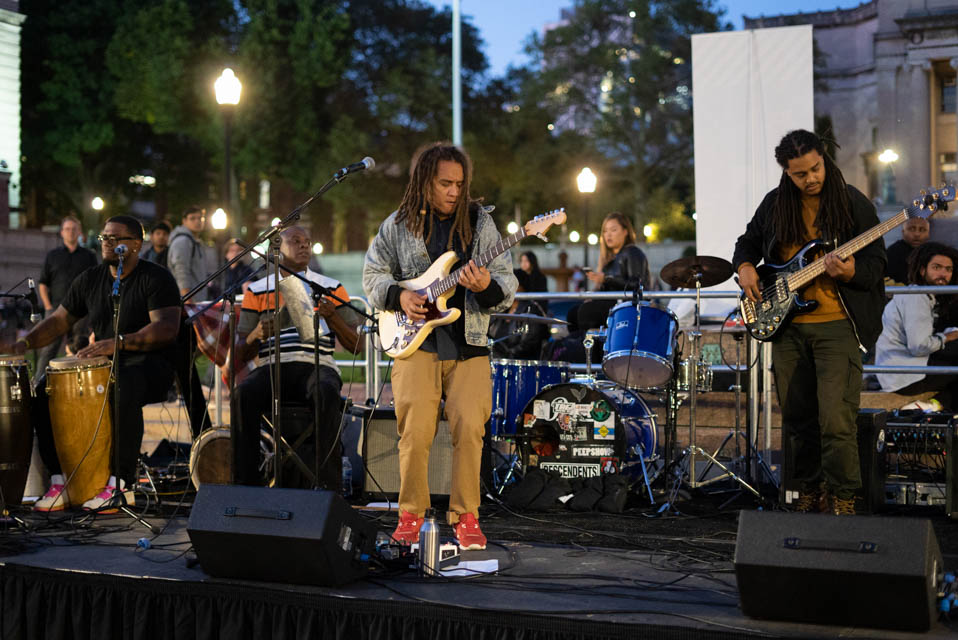 Musicians animated the Butler Lawns for a final summer soiree.

On the last Thursday evening of the summer, students and community members flocked to Butler Lawns, spreading out their picnic blankets and kicking off their shoes to tune in to WKCR’s fall concert.

This year’s concert theme was “music across genres and generations.” Staying true to the theme, the concert showcased performers from all over the world, a variety of genres, and different generations.

As a non-commercial radio station, WKCR has the freedom to broadcast music that does not play on mainstream radio. Oftentimes, WKCR uses its unique position as a student-run station to broadcast local or unconventional artists’ music.

The station’s commitment to inclusion extends beyond the reach of Columbia student listeners. One of WKCR’s main focuses is integrating itself with the local community of New York City, and the station hopes that Columbia students do so as well.

“People talk about the ‘Columbia Bubble,’ and this idea that people in it don’t tend to leave Morningside Heights,” Julia Rocha, BC ’20, the head of the station’s Latin department, said. “One of the things that I’ve appreciated most about working at WKCR is the way that it connected me to music communities all across New York City. So, more than anything, I hope that people enjoying the music today get curious about the different kinds of music scenes happening all over New York and their different cultural and political missions.”

This year’s headliner was Lady Ann, a groundbreaking reggae star from Kingston, Jamaica, and the first female DJ to ever have a number one hit in Jamaica. Her single “Informer,” and her album of the same title, were released in 1981 and were hits across the world. The International Women in Reggae, a group of female reggae artists based in New York, backed up Lady Ann in her performance. Lady Ann finished off the night with relaxed reggae tunes and left students bobbing their heads as the concert came to an end.

Earlier in the evening, before Lady Ann’s performance, duendita took the stage. duendita is an experimental soul artist from Queens, and she stunned the audience with her angelic riffs contrasted with edgy, pulsing beats.

After duendita’s captivating performance, Yasser Tejeda & Palotré, a Dominican fusion group, performed. Their music was inspired by the Dominican Republic, and their songs showcased the beautiful, authentic sounds of their home country. Their aim was to demonstrate the “other side” of the Dominican Republic that has not been marginalized by politics or corruption. Throughout their set, audience members found it hard to listen without getting up and dancing along.

Between sets, DJ Vaughn of WKCR’s reggae radio show "Footsteps of Reggae” deejayed and spun tracks so there was never a dull moment on stage.

Rocha and Elisabetta Diorio, CC ’20, helped organize the concert. Through the concert, they hoped to inspire the audience to listen to music outside of their comfort zone. Diorio, who is the head of the American department at WKCR, wanted to invite performers to campus who would align with WKCR’s mission.

“We wanted a lineup that mirrored the breadth and eclectic nature of what WKCR plays,” Diorio said. “WKCR has a bunch of different programs: American, Latin, in all languages, jazz, classical, and new music. We play all sorts of genres and we wanted a lineup that was going to be just as eclectic, and also encourage listeners and audience members to hear something that they maybe weren’t familiar with.”

In addition to the diversity of genres presented at the concert, the organizers also wanted to showcase performers who varied in age. In creating the lineup, Rocha knew she wanted the music to be accessible and enjoyable for a broad base of listeners.

“We wanted to appeal to both our peers in a college audience as well as to our listeners,” Rocha said. “That’s why the intergenerational aspect was so important as well. If you look at other programming that gears itself towards college students, it’s very much only listening to people from our generation. I think that underestimates what young listeners want and are curious about.”