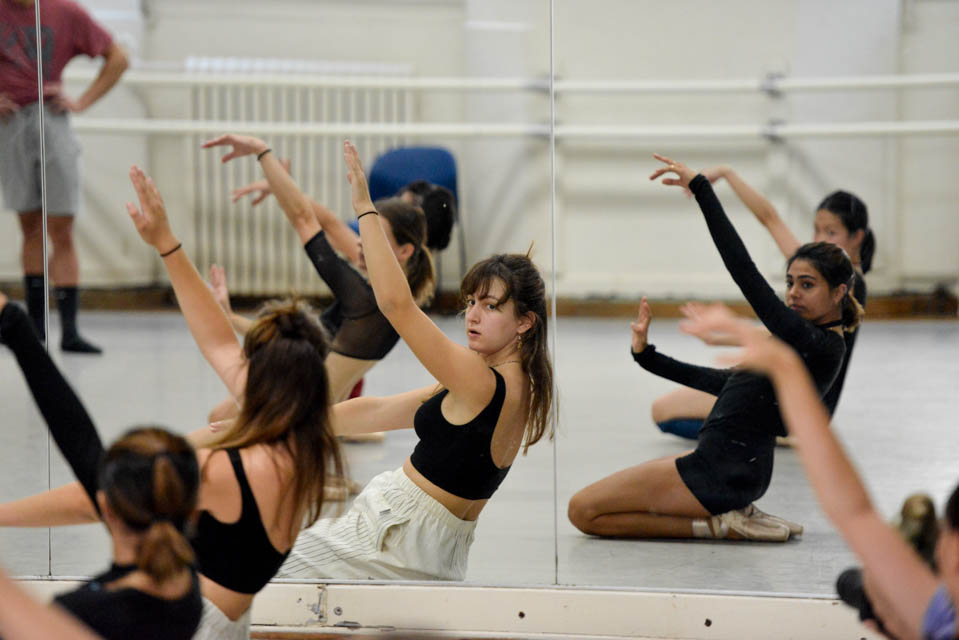 Of the six choreographers brought in to create new works for CBC this fall, Marazzi-Sassoon is the only student in the mix.

Screaming crows, the personification of death, and ’70s experimental rock music may at first seem like an unconventional combination when juxtaposed with neoclassical ballet. Yet all serve as the foundational backdrop for a new work choreographed by Sarah Marazzi-Sassoon, BC ’22, for the Columbia Ballet Collaborative this semester.

Of the six choreographers brought in to create new works for CBC this fall, Marazzi-Sassoon is the only student in the mix. She will premiere her work alongside professional choreographers Emily Coates, Eve Jacobs, Emily Kikta, Earl Mosley, and John Selya at CBC’s Nov. 24 performances.

When asked where she is from, Marazzi-Sassoon often laughs and prepares her listener for a lengthy response.

“I was born here, but I moved to Paris when I was very young, and I grew up there. My mother is Italian, so I spent a lot of time in Italy too, because it was close. And then, for my last two years of high school I moved to San Francisco, and then came here for college. And then also my dad’s family is from Baghdad, so it’s a whole mix,” she said.

Marazzi-Sassoon’s bicontinental identity has helped expose her to many forms of ballet, which has given her an enriched artistic experience that she draws upon in her choreographic processes.

“Training in ballet in Paris, and the kind of dance I saw there, helps a lot. I mean, on more of a subconscious level. And then, coming to the U.S. as a teenager, a young adult, and getting exposed to a whole new world of things has recently fueled what I get inspired from,” she said.

English choreographer Christopher Wheeldon stands out as one of the most impactful of Marazzi-Sassoon’s many artistic inspirations. She recalls seeing a work of his in Paris when she was just 10 years old that changed her outlook on the ballet form.

“He, I think, opened the door for me to be like ‘Oh! There is more to dance,’ and then from there I discovered more actual contemporary choreographers, and sort of melding different styles of dance. And then, coming here, I made a lot of friends in a bunch of different art forms and dancers, like other people who choreograph and mentor me,” she said.

In order to secure a spot as a choreographer this semester, Marazzi-Sassoon underwent a competitive application process in the spring. She noted the support of friend and former CBC choreographer Kosta Karakashyan, CC ’19, who encouraged her despite her doubts.

“I applied thinking I wouldn’t get in. Thinking, ‘I’m too young; they usually only accept upperclassmen and graduate students,’ but Kosta, who was the CBC choreographer last fall, was like ‘just apply! Just do it!’ and so I did,” she said.

Marazzi-Sassoon had to propose a concept for her piece, as part of the application process. Departing from her usual practice of choosing the music first, she opted to begin with a story, basing her thematic vision off of “On the Last Day,” written by Hans Christian Andersen in 1852.

A cast of 10 dancers, consisting of nine women and one man, is bringing this story to life. The choreography follows the neoclassical contemporary ballet fusion canon, and the women will dance in pointe shoes.

“In the story, there are two main characters. One of them is Death, and one of them is an old man who dies, and so I have the old man as the guy, and death is one of the girls, and the eight corps girls are this crow, demon army. The idea so far is to keep juxtaposing a very rigid symmetrical structure into moments of chaos and disorderliness,” Marazzi-Sassoon said.

In order to make her vision a reality, she will utilize a two-pronged approach combining preset phrases of her own choreography with input from her dancers, so they can best translate the movement onto their specific bodies.

“I knew visually how I wanted the piece to start, so I wanted this weird clump, and then I gave them the idea and kind of saw how they reacted to that,” she said.

Marazzi-Sassoon also looked for movement in the music. For her work, she will edit together music by Meredith Monk, David Cross and Robert Fripp, Adrian Belew, and King Crimson.

“The music is like, weird, experimental, rock from the ’70s, mostly,” she added with a laugh.

When synthesized, the music and dance will together aim to emulate the moral of the Andersen story, which she describes as “the hubris of thinking that you’re great, when humanity is at its essence just animals that are terrible.”

Still at the beginning of the rehearsal process, Marazzi-Sassoon will navigate her vision and flesh out the details alongside her cast, as they create together. They intend to use “On the Last Day” as the framework that they will adapt to meet their needs.

Executing this piece alongside five professional dancers and choreographers brings about mixed emotions of excitement and nervousness for the student choreographer, as noticed by one of her dancers, Samantha Sacks, CC ’22, at a rehearsal on Sunday.

“I just totally notice hesitancy to give corrections and stuff that exists in the first couple rehearsals with a student choreographer. But even today, which was our second [rehearsal], I think [Marazzi-Sassoon] sort of got on her horse and was more confident, and it was awesome. We’re just there to receive corrections and be told what to do, and it’s cool when they sort of find that voice,” Sacks said.

Sacks is excited to be dancing for Marazzi-Sassoon this semester, noting that her style is a bit more contemporary than the classical work she is used to dancing.

“I’m totally supportive of her process and of everything she’s creating. And yeah, it’s funny to see so much doubt when they have so much power. She deserves to just take all the power and let her creative vision fly because it’s fun to be a part of,” Sacks said.

Despite the nerves, Marazzi-Sassoon has an eager cast that is excited to learn and take notes from her. As the semester unfolds, they will together grow closer to a fully realized piece, while also growing closer as a cast.

“It’s very terrifying but also exhilarating,” Marazzi-Sassoon said, later adding, “I can do this.”