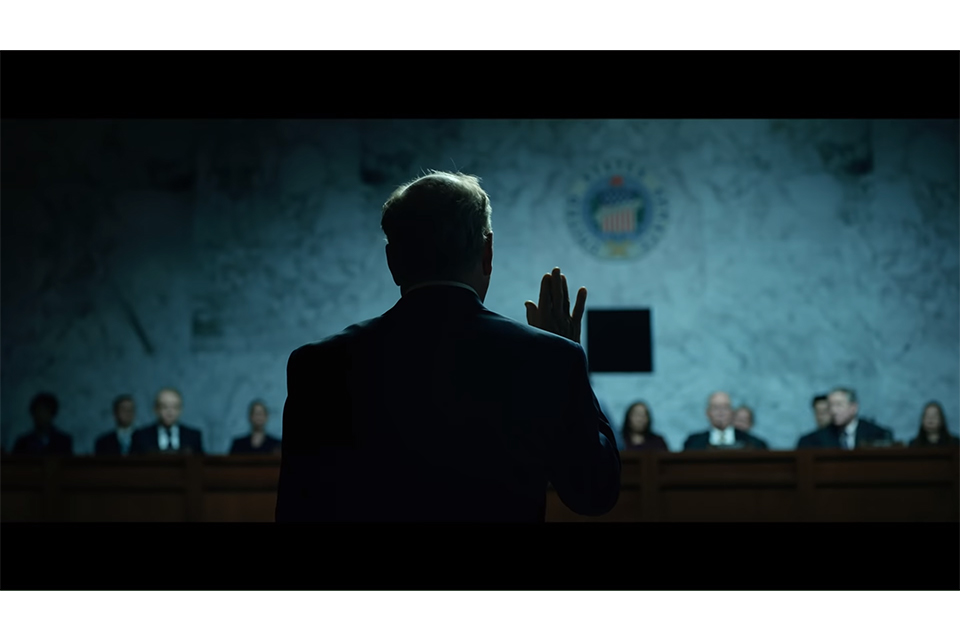 Abort the special-operations briefing and grab a jumbo popcorn. On Friday night, veterans and active-duty military affiliates at Columbia were treated to an exclusive prerelease screening of Scott Burns’ new docudrama “The Report,” starring Adam Driver, at a packed event in the Roone Arledge Cinema.

The evening’s screening was hosted by the Arts in the Armed Forces organization and sponsored by the School of General Studies and Columbia Milvets. The film was followed by a Q&A with the award-winning writer, director, and producer Eddy Moretti, in conversation with the real-life subject of the film’s intense drama, former Senate staffer Daniel Jones. Panelists answered students’ questions about Senate investigations, the production of a blockbuster, and what it’s like to be portrayed by Adam Driver.

The film, scheduled for national release on Nov. 15, tells the true story of idealistic young Senate staffer Daniel Jones, portrayed by Adam Driver, who is tasked by his boss, Dianne Feinstein, portrayed by Annette Bening, to lead an investigation into the CIA’s Detention and Interrogation Program created in the aftermath of 9/11. Jones’ relentless pursuit of the truth leads to explosive findings that uncover the lengths to which the nation’s top intelligence agency went to destroy evidence, subvert the law, and hide a brutal secret from the American public.

The film features an all-star cast led by Driver, known for his roles in “Star Wars: The Last Jedi” and “BlacKkKlansmen;” Bening, known for “American Beauty” and “The Kids are All Right;” and “Mad Men” star Jon Hamm. Sarah Goldberg, Michael C. Hall, and Ted Levine round out the ensemble.

This year’s film screening was the second annual event at Columbia hosted by AITAF. Last year, military students were treated to a screening of “The Taking Of Pelham 123,” which featured special guest appearances by Driver and his colleague, Ben Stiller.

Founded by Driver in 2006 after he served as a U.S. Marine, AITAF strives to connect former service members with a passion for film to the larger film community. According to their website, AITAF’s mission is to “use the powerful shared experience of the arts to start conversations between military and civilian, service members and family members, the world of the arts and the world of practical action.” The organization has been covered by publications such as the New York Times, The Washington Post, Variety Magazine, and VICE.

This year’s event featured special guest Eddy Moretti, co-founder of Unbranded Pictures and the film’s principal financier, who has worked as VICE Media’s chief creative officer. During the Q&A, Moretti provided insight into the film’s acquisition by Amazon Prime Video, its run at the Sundance Film Festival, and how he got started in film after a short stint as an army cadet.

Joining Moretti on stage was a former staffer for the Senate Select Committee on Intelligence and the man whose story inspired “The Report,” Daniel Jones. His report, titled “The Committee Study of the Central Intelligence Agency’s Detention and Interrogation Program,” or more succinctly, “The Torture Report,” is considered the largest investigative review in Senate history. Today, Jones is the founder and president of Advance Democracy, Inc., a non-profit, non-partisan consulting firm which conducts public interest investigations. Jones shared his insights into Washington politics, the novelty of “almost” starring in a major motion picture, and the difficulty of transitioning to a new career after years of government service.

All in all, the event was an opportunity for military service members at Columbia to share their personal experiences with the event’s special guests, gain some behind-the-scenes insight into the film industry, and spend an evening somewhere other than Butler Library.