Beyond the Butler Banner: Book club illuminates the legacies of eight female authors through conversation

Beyond the Butler Banner: Book club illuminates the legacies of eight female authors through conversation 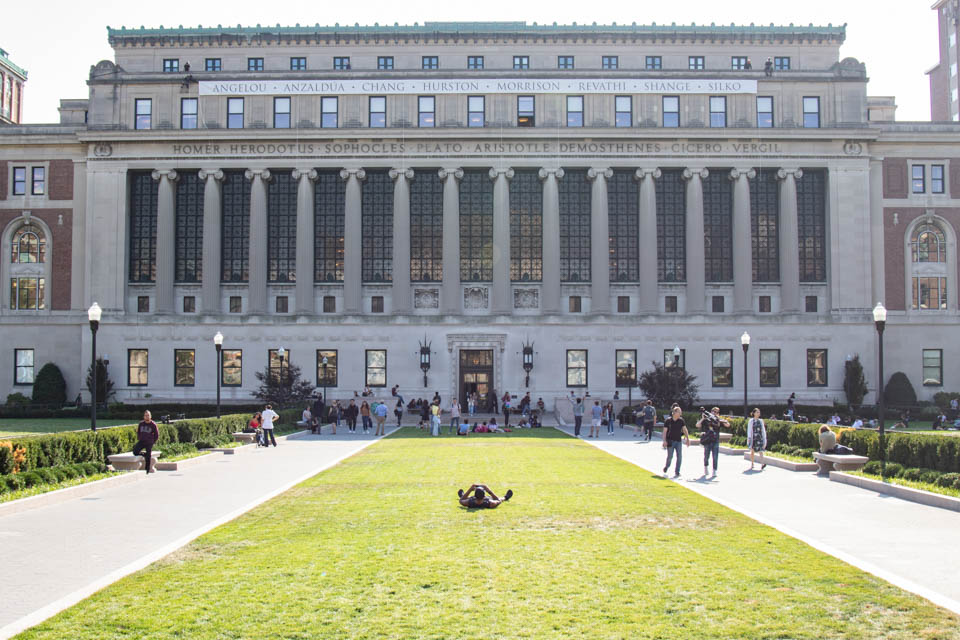 The Butler Banner features the names of eight female authors, including Hurston.

The newly unfurled Butler Banner will hang on the façade of Butler Library for the rest of the semester, exhibiting the names of eight female-identifying authors. The project’s mission doesn’t stop at simply showing students these names as they pass by or walk into the library; it aims to get students talking about the authors and their legacies.

On Friday afternoon, a mix of graduate and undergraduate students gathered in Barnard’s Milstein Center for Teaching and Learning for the second in a series of eight weekly book club meetings led by members of the Butler Banner Project. The organizers are holding a series of events that encourages students and other members of the Columbia community to put these authors and their works into conversation.

Each of the book club meetings center around one author from the recently unveiled Butler Banner. On Friday, GSAS student Lisa Del Sol led a lecture and discussion about Zora Neale Hurston, BC 1928, a renowned author and anthropologist. In the span of an hour, Del Sol covered everything from Hurston’s early life and education to her anthropological fieldwork and literary relationship to Langston Hughes.

In an interview with Spectator, Del Sol said the ideas for the banner and the book club series emerged simultaneously.

“Initially when the book club started it was … kind of a rebellion to the modern Core that they teach,” she said. “[The project leaders] decided to do the Butler Banner project to extend that, or show that it's not just Homer and all these other white men that are part of the Western canon. There are other people that have also contributed to Western or American literature as well.”

For Del Sol, Hurston is exactly this type of writer. An African-American woman who grew up at the turn of the century in Florida, Hurston’s early life would go on to shape her work as an adult, as she wrote about race and feelings of isolation.

“The way she frames the struggle is so beautiful. … So many people have felt like this––they felt very isolated. But even in that isolation, in that moment, she’s still strong, and she’s still herself and she holds onto that. And I think part of that comes from the fact that she had a very strong sense of self as a child,” Del Sol said, speaking about Hurston’s “How It Feels to Be Colored Me,” which the book club discussed at length.

When asked how she selected the 1928 essay for discussion, which describes Hurston’s childhood in Eatonville, Florida, as well as her time at Barnard, Del Sol spoke of its universal themes.

“I chose this [excerpt] because it deals with a lot of things that are still very much so relevant today, and I felt like a lot of people can relate to that, whether you’re black or not. I feel like women can relate to feeling isolated and ... also the themes of racial undertones, and not feeling included.”

As an African-American woman whose mother died when she was just 13, Hurston forged her way through discrimination in the South, all the while retaining pride in her culture. She says in the excerpt, “But I am not tragically colored. There is no great sorrow dammed up in my soul, nor lurking behind my eyes. … Even in the helter-skelter skirmish that is my life, I have seen that the world is to the strong regardless of a little pigmentation more of less. No, I do not weep at the world—I am too busy sharpening my oyster knife.”

To Del Sol, Hurston’s themes of racial pride and celebration of culture ring true for authors across the banner.

“What ties them all in, what connects them … you will see across the board across all authors these themes of marginalization, but they don’t succumb to it, it’s like, they lean into that feeling, which is something that is kind of scary to do––to constantly approach something that frightens you and not run away. It’s a pretty powerful thing.”

Del Sol pointed out a particularly strong connection between Hurston and Ntozake Shange, BC ’70, the featured author of the inaugural book club meeting.

“Shange is widely read, but I felt like there was a resurgence of her literature after she passed away, which tends to happen. … When artists pass away people run out to go see their pieces or people run out to download their music … but Zora never got the chance to have that moment.”

Hurston’s work became widely read after writer Alice Walker unearthed it in the 1970s and brought it to the national stage, but at the time of Hurston’s death, her work was relatively unknown. Like Walker did decades ago, the Butler Banner Project seeks to give Hurston, and the seven other authors, the “moment” that Del Sol described.

Staff writer Olivia Doyle can be contacted at olivia.doyle@columbiaspectator.com.