“What would Lynne Tillman do?” An author shares noteworthy writing tips, short stories on individuality at creative writing lecture

“What would Lynne Tillman do?” An author shares noteworthy writing tips, short stories on individuality at creative writing lecture 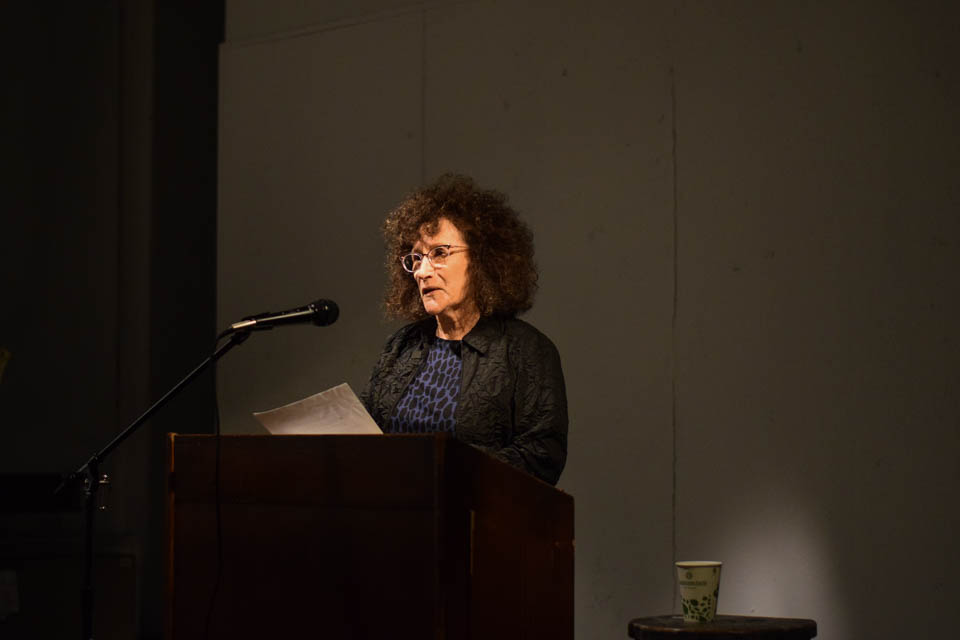 The Guggenheim Fellowship winner shared candid advice with students ambitious for a writing career of their own.

“Whatever you’re told not to do, it’s worth exploring,” Guggenheim Fellowship-winning author Lynne Tillman said at a talk on creative writing at Dodge Hall on Wednesday night.

Tillman read some of her newest short stories aloud at the School of the Arts’ Creative Writing Lecture, which aims to bring a series of authors each semester to Columbia to engage in conversations about writing. She spoke to Spectator following the event about her personal experience and the nature of the short story writing process.

Tillman writes fiction and non-fiction novels, short-stories, and essays. Her works include “Haunted Houses,” “Motion Sickness,” “Cast in Doubt,” “No Lease on Life,” and, most recently, “Men and Apparitions.” She writes for art books and museum catalogues, including a bi-monthly column, “In These Intemperate Times,” for “frieze” art magazine.

She received her Guggenheim Fellowship in 2006 and a Creative Capital/Warhol Foundation grant in 2014, in addition to being a finalist for a National Book Critics Circle Award. She is also a professor at The University at Albany (SUNY), and teaches in the School of Visual Arts’ MFA program in Arts Writing.

Tillman opened her lecture by giving a summary of her writing techniques, reading from one of her students’ notes that documented her techniques while she was teaching at The New School.

These documented tips transitioned into organic advice, as Tillman went on to speak on the importance of taking the reader by the hand and sharing an eye-opening aphorism with the audience: You are your first reader.

“If the writer isn’t surprised about what they’re writing, then a reader won’t be,” Tillman said. “You have to feel excitement about what you’re writing and hope it translates to the reader.”

Tillman also focused part of her lecture on her disbelief in rigid writing structures and the idea that writers should be specialists in a certain format. She claimed that no one knows how to write a novel or short story until they actually write it.

Continuing her lecture, she read five short stories written after publishing “Men and Apparition.” The stories are unconnected and differ vastly in types of characters and plotlines, ranging from a story about a girl at a bar to a taxi driver with strong philosophical opinions. However, they all have common themes of individualism, humanity, and time.

Tilman spoke to Spectator about the motivation behind the themes in her short stories, creating characters, and her personal experiences with writing.

“I am fascinated by how complex people are, how people function, and how time structures so much of what we do,” Tillman said.

The author compared the short story form to a specific moment in time, like a distinct childhood memory that flashes in one’s mind. She further emphasized how a writer cannot cleanly separate fiction from nonfiction in their work..

“The way you write about events, even if they really happened, creates a sort of fiction because you are writing from a certain perspective,” Tillman said.

In addition to describing the inherent traits of writing nonfiction, she went on to describe her personal experience when writing: For Tillman, the literary process is a transcendental and joyous form of escape from reality.

“Writing is the best time of my life. When I write, it’s as if I no longer exist,” Tillman said. “I am intensely and completely involved, nothing else intrudes.”