There is no typical “Man of SHARP”

There is no typical “Man of SHARP” 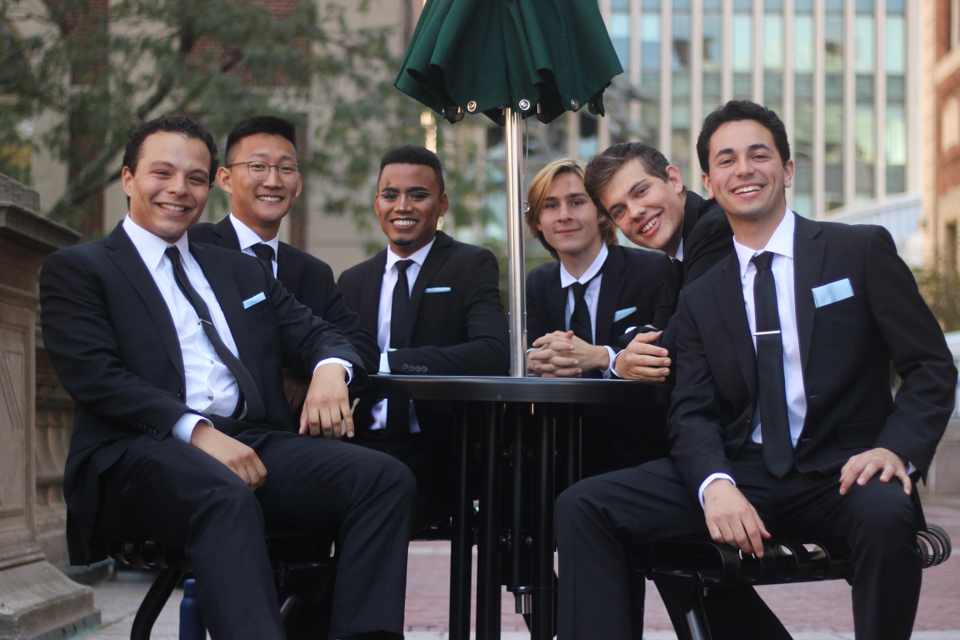 “On the record, we are actually launching a world domination plan,”

While this may seem like a wild assertion from SHARP President Matthew Roman, CC ’21, it certainly comes with some rationale. Founded in 2011, Columbia SHARP has quickly made a name for itself as the premier, sleek, multi-genre, ballad-belting, all-male a cappella group on campus.

In recent years, SHARP has released three professional music videos (one of which has garnered over 20,000 views), competed in the International Competition of Collegiate A Cappella (for all of the a cappella-laymen out there, this is the same competition featured in Pitch Perfect), and even organized a week-long tour last semester, where they traveled throughout the Northeast, visiting and performing at various schools including Yale, Dartmouth, and Bates College.

Clad in matching suits and shiny shoes—all black, save for a Columbia blue pocket square in each member’s left breast pocket—SHARP is instantly recognizable as a group. Although they are dressed in identical attire, Zachary Kimmel, CC ’21 and treasurer of SHARP, asserted that they aren’t carbon copies of each other by any means.

“Many of us are very vastly different, I think,” Kimmel said. “We’re all doing different things on campus, all involved in different activities, from different places, have had very different lived experiences. But we all come together with this sort of singular pursuit, singular goal of making music together and having a good time doing it.”

Kimmel also spoke to how much SHARP has evolved over the years, even throughout the time that he has been a member.

“The cultural dynamic of SHARP has definitely changed,” Kimmel said. “I don’t think we've had a singular identity. I think we are very much a reflection of the people and the characters and the dynamics that are in the group. I definitely think we look for really talented singers, first of all, but I don’t think there’s any sort of one personality type or singular type of guy or type of male student on this campus that we seek out above others.”

Kimmel was a SHARP fan before he even got to campus. As a high schooler, he partook in all-male a cappella and knew that it was something he wanted to continue in college, even writing one of his “Why Columbia” essays in his application about SHARP. When he auditioned upon his arrival to campus, other SHARP members were shocked that he had even heard of them. Needless to say, he was accepted, and has had “an incredible three years.”

What exactly does the “all-male” portion of SHARP’s title mean? As explained by members during the interview, SHARP auditions are actually open to individuals of all genders.

“Anyone who is interested in auditioning for us, no matter their gender identity, can audition, so long as their voice fits into the arrangements that we usually do,” Business Manager Justin Henry, CC ’21, said. “Although it is shown as an ‘all-male’ a cappella group, that definition can be very open.”

Henry does not believe SHARP portrays itself in a stereotypically masculine way.

So then why hang on to the “all-male” moniker?

“That language is something prehistoric that was passed down to us, that I guess should be more critically looked at,” Henry said.

This notion of SHARP’s identity as a malleable and evolving one was echoed by music director Evan Lim, CC ’22.

“I think something that's really awesome about being part of this group is that it was founded in 2011, which is just eight years ago, so we’re still kind of shaping ourselves,” Lim said. “We’re still figuring out what our identity exactly is. … It is just an incredible experience to be part of something so new, something that’s still forming itself.”