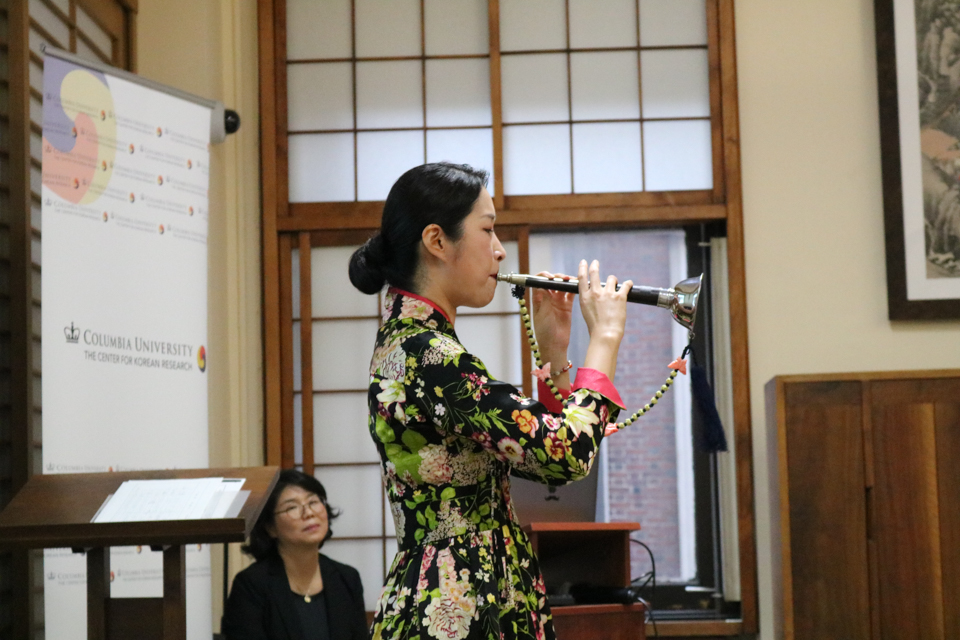 Wearing an intricately patterned floral dress, her dark tresses of hair twisted into an impeccable updo, not a knot out of place, musician Gamin Kang was the picture of elegance and grace.

On the afternoon of Wednesday, Oct. 16, Gamin Kang gave a concert of traditional Korean music in Kent Hall lounge. The musician, who typically goes by “gamin,” preferring the aesthetic of the smaller lowercase letters, was introduced to the audience by Hye Eun Choi, a Korea Foundation postdoctoral fellow. Currently, she travels the world performing traditional Korean music as well as her own compositions, often melding Korean music with more improvisational styles.

Before Kang played any music, she took some time to provide a demonstration of each instrument to the audience. The three instruments she brought to play for the mini concert were the piri, a double reed instrument, the taepyeongso, a reed instrument of the oboe family that resembles a horn, and finally, the saenghwang, a wind instrument constructed of 17 bamboo pipes.

One of the pieces Kang played was a traditional Korean march, typically reserved for the arrival of an important foreign guest or a king in royal court. Before beginning, she provided a disclaimer that the taepyeongso is an instrument with a jarringly high decibel level.

“Usually, it is played outdoors, so actually this is not really an appropriate place to play, but we have no choice,” Kang said with a laugh. “This is a little bit loud. This is originally an instrument for marching [bands], so it’s a loud instrument, and usually played with many professionals.”

Her playing took on a transfixing quality. The phrases were loud and powerful, but her face maintained a look of deep composure and relaxation.

Kang also played on the saenghwang, choosing a piece that sounded like a lullaby, mixing soft, ethereal tones with sing-song elements. According to emcee Choi, the piece is meant to evoke the vision of a dragon moving through water.

Later, during the Q&A session, Kang elaborated on the aesthetic of traditional Korean court music, explaining that the lack of melody makes the music sound unusual to ears trained to appreciate Western-style music.

“If you listen to traditional [Korean] music, especially court music, it's not very expressive at all. It's very controlled and very refined, and kind of profound sounds …” Kang said. “The function of this music is an announcement, so it’s very powerful sounds with melody.”

The musician then spoke of shinawi music, a type of traditional Korean music that relies heavily on improvisation. In the shinawi structure, composers must stick to a particular scale and rhythm, but there is room to create one’s own versions of shinawi, a freedom that Kang greatly appreciates.

“Actually, [shinawi] is very similar to jazz music,” Kang said. “I do collaborate with Western classical composers who write music for my instrument. And so, I am able to play kind of improvised music with experimenter musicians who play jazz or free music. So that’s how I make new music, with collaboration.”

Kang’s desire to honor her roots in traditional Korean music, while still being open to contemporary and experimental styles, is what makes her so unique as a musician. When asked what her favorite part of playing music is, Kang offered up an original twist that epitomized her identity as a pioneer of musical improvisation: