The politics and protest of art pondered by leaders of Columbia, the Guggenheim, and the Metropolitan Museum of Art at Committee on Global Thought event

The politics and protest of art pondered by leaders of Columbia, the Guggenheim, and the Metropolitan Museum of Art at Committee on Global Thought event 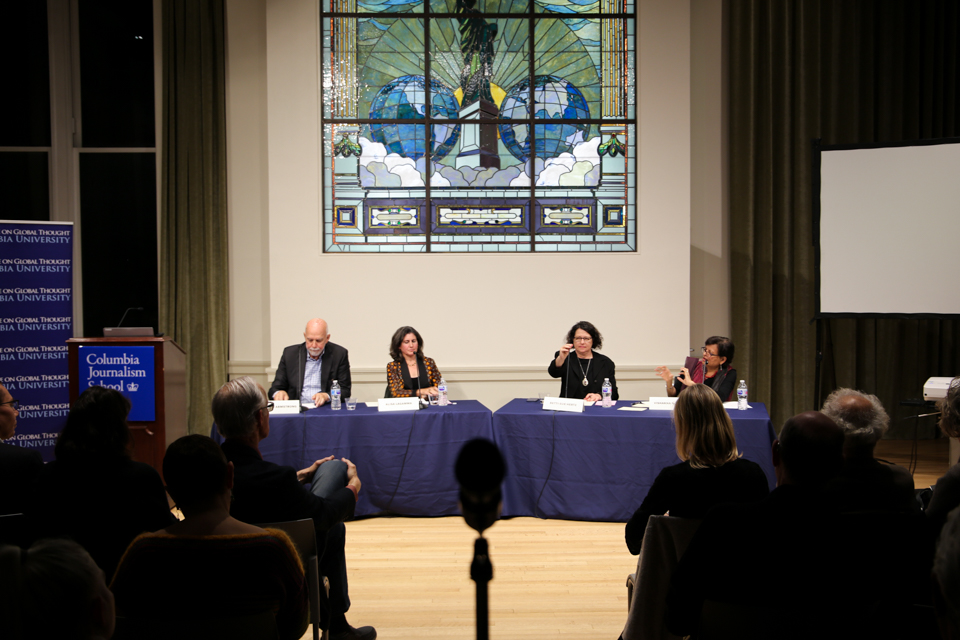 Tear gas. Colonial theft. Money connected to the opioid addiction crisis. These are not stakes one might typically associate with art museums, but all have been implicated by recent protests at the Guggenheim and Whitney, among other global art institutions.

Museum heads from the Guggenheim and the Metropolitan Museum of Art addressed the politics of art Tuesday night on a panel titled “Art, Politics, and Museums: New Issues, New Actors” in the World Room at Columbia Journalism School.

Vishakha Desai, senior advisor for global affairs to President Bollinger and vice-chair of the committee on global thought at Columbia, moderated the panel, which included Richard Armstrong, director of the Solomon R. Guggenheim Museum and Foundation and former director of the Whitney Museum of Contemporary Art, Alisa LaGamma, Columbia Ph.D recipient and curatorial head of the department of Arts of Africa, Oceania, and the Americas at the Metropolitan Museum of Art, as well as Betti-Sue Hertz, the director and chief curator of the Wallach Art Gallery at Columbia University.

In opening remarks, each panelist addressed the changing political spheres of museums and the commitments they have to not only the art they display and artists they give space to, but also to their patrons.

“Although the museum—when I arrived 11 years ago—was calling itself a global institution, it really had a strong predilection for Europe and the United States, and that was the globe,” Armstrong said.

As museums like the Guggenheim have made efforts to diversify their collections, increasingly political questions have been asked about the role museums play as institutions of learning and thought.

“Art and especially art museums, particularly the larger ones, are increasingly coming under fire from progressive groups of activists and artists occupying the front pages of mainstream publication and other media,” Desai said. “The protests you heard about at the Whitney, MOMA, Guggenheim, or the British Art Museum, range from demands for removal of benefactors to removal or even destruction of works of art.”

Demonstrations during this year’s Whitney Biennial protested a board member of the organization whose personal business sold tear gas used on migrants crossing the US-Mexico border from Tijuana to San Diego. The Whitney allowed protestors to remain in its building as they draped signs reading, “When We Breathe We Breathe Together.”

In various moments of tense exchanges between panelists, Armstrong addressed the Guggenheim’s own positioning in relation to political protests. In February 2019, protests arose against the Guggenheim’s acceptance of money from the Sackler family, the owners of Purdue Pharma, who produce Oxycontin, a drug tied to the opioid addiction epidemic.

Armstong dismissed criticism of accepting dirty money and said museums have an ethical obligation to consider if a “donor is someone you might want to have dinner with,” despite the fact that the Guggenheim severed ties with the Sackler family one month after the protests began. Armstrong did not specify if he would want to have dinner with the Sackler family.

Other questions were addressed about the impact of colonial theft of artwork in the museum world. The problem extends beyond New York, as museums in France, England, and around the world have been ensnared by calls for repatriation and restitution of artwork taken from formerly enslaved, colonized, and marginalized communities. The panel concluded that the best course of action would be to include a history of the work of art’s origin and journey to its present resting place in their descriptions at museums.