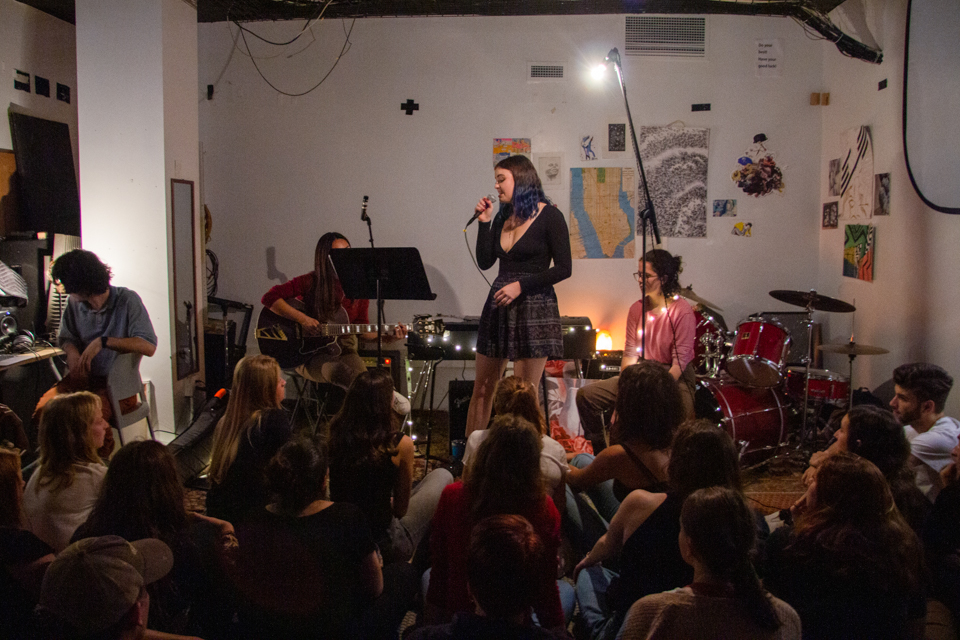 The aura of the premiere CU Records: Unplugged was reminiscent of a Tiny Desk concert, with cozy rug-covered floors and warm string lights draped across the floor, around instruments, and even on top of musicians.

An enraptured crowd sits on the floor of CU Records, mere inches away from the musical world building before them. Vocals mix with chord progressions as the sounds of singer Jackie Marchal, CC ’22, and singer-pianist Sarah Kinsley Du, CC ’22, flow into the audience, pulling the room into their grasp. This will be a night to remember.

The energy in the CU Records recording studio was palpable on Thursday, Oct. 17, as the student-run recording studio’s newest concert series, titled “CU Records: Unplugged” (an homage to the series “MTV Unplugged”), was launched. The idea was generated and organized by Marchal and Du, two CU Records engineers, with the goal of creating a lasting intimate performance series within CU Records’ walls.

“We need more spaces to see what Columbia musicians are up to,” Marchal said in an interview before the show. “There’s not enough venues [for students].”

Du echoed this sentiment while underscoring the importance of venues.

The duo generated the idea for the show together in an effort to develop new and exciting events for CU Records. They hoped to leverage the room’s close quarters and comfortable decor to create a new kind of performance environment for student musicians.

“I think we really wanted a creative space that was a bit more intimate,” Du said.

Students have attempted to develop similar spaces around campus over the years. Most recently, alumnus Natachi Mez, CC ’19, drew monthly crowds to McBain’s lounge with her “The (Not So) Tiny Desk” concert series.

With close to 50 students packed into the room, the aura of CU Records was reminiscent of a Sofar Sounds or Tiny Desk concert. The rug-covered floor gave the room a cozy feeling, and the primary lights had been dimmed. String lights were draped across the floor, around instruments, and even on top of musicians.

The show began with a 30-minute set by Marchal, flanked by Elizabeth Bailey, BC ’22, on the cajon and drum kit, and Stephanie Chow, CC ’23, on guitar. Keeping with the theme of intimacy, Marchal conversed with the crowd between songs, giving context for their selection or simply announcing that she needed a break for tea.

Marchal never found herself pinned down by genre, her powerful voice finding a home in jazz standards, like Billie Holiday’s “Crazy He Calls Me,” as easily as in R&B staples, like Lauryn Hill’s “I Gotta Find Peace of Mind.”

As Marchal’s set wound to a close, she was joined by Du to perform a power ballad titled “Away” that the duo had written only two days prior. As Du’s deft hand fluttered across the keyboard, Marchal’s singing reverberated throughout the room. The song was met with uproarious applause.

Du took the stage next, paired with Daniel Burgess, CC ’22, on the guitar. Du traversed a setlist of original tunes as well as a cover of Lana Del Rey’s “Norman Fucking Rockwell!”, many of which will be making their way onto her upcoming EP. Du sung with an emotional depth that was infectious; her rendition of her song “Anya,” dedicated to a member of the audience, elicited gasps as members of the audience fought tears.

With the first ever “CU Records: Unplugged” show drawn to a close, one question remained: What’s next for the concert series?

“Hopefully a show just like this,” Du said. “ We don’t really know who yet but we’re starting an actual application process. So, for the next one, people will apply.”

On a college campus where musical outlets are few and far between, Marchal and Du’s focus on developing a creative musical space may just unearth some surprising talents from the Columbia community. But, for these two musicians, it’s all about allowing people to perform.

“As long as there’s a space,” Du said, “someone will always be playing.”