They’ve got magic to do, just for you: Spectator previews CMTS’s Pippin

They’ve got magic to do, just for you: Spectator previews CMTS’s Pippin 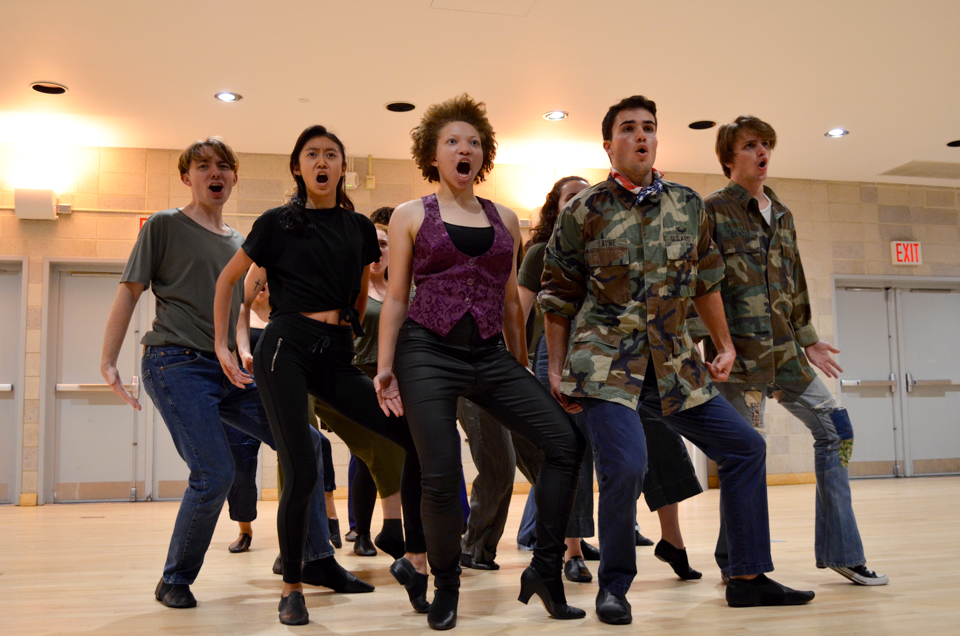 "I really hope that people leave with the idea that you don't have to have one idea of how to live life,” director Sophia Houdaigui said. "We're bombarded consistently by social media posts … the idea of securing a job immediately after graduation. ... I want people to be able to leave and say one, that you should follow what your passion is in life and create your own interpretation of what happiness can be, but also that you honestly don't have to leave in May with a job the next day, on that Monday."

At its center, “Pippin” is about a prince recently graduated from university, played by Mark Pierce, CC ’20, experiencing severe existential doubts—a topic almost painfully relatable for Columbia students. However, when asking the Columbia Musical Theatre Society’s cast and production team, the play’s meaning manifests as so much more.

"I think that ‘Pippin’ is a show about self-discovery,” director Sophia Houdaigui, BC ’21, and CMTS president, said. “It's one about expectations and not meeting them, and it's about finding meaning in life when life can feel meaningless."

“It’s about a boy trying to find his meaning in the world,” co-producer Sarah Leidich, BC ’21, said. “Trying to find out what it means to be extraordinary, and also to be ordinary."

CMTS will be presenting “Pippin” in Barnard’s Minor Latham Playhouse from Thursday, Oct. 24 through Saturday, Oct. 26. The musical “Pippin” first premiered on Broadway in 1972, with music and lyrics by Stephen Schwartz, book by Roger O. Hirson, and was directed and choreographed by Bob Fosse. “Pippin” was recently revived on Broadway in 2013, and each iteration of the musical garnered a collection of Tony Awards in its respective run.

The tale is famous for its metatheatricality, with the Leading Player, played by Lauren Wilmore, BC ’20, acting as narrator, often speaking directly to the audience. With her troupe of players, Grace Eldridge, CC ’23, Samantha Seiff, CC ’22, Angela Zhang, CC ’22, and Emily McKiernan, BC ’23, they create backdrops of movement sequences and dance, transforming an ordinary parable to one replete with multidimensionality. 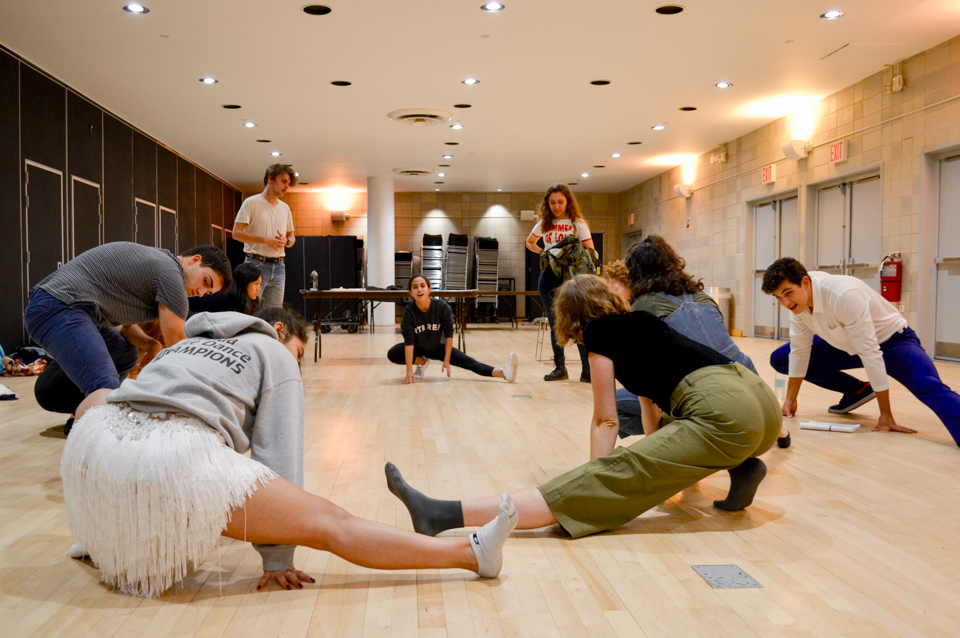 Olivia Fine
"As an actor, something that I've noticed is a lot of people learn differently,” Houdaigui said. “We all have different learning styles in the classroom, we all have different learning styles when we approach acting. ... Some actors respond really well to physical manifestations of things, like they're movers and dancers so they'll respond well to kinesthetic learning, and maybe that takes demonstrating what the feeling of that particular line looks like, rather than, you know, getting into the nitty-gritty. ... Others really like to go back to the text, and spend a lot of time with it."

To tell Pippin’s story, the players morph back and forth between ensemble members and characters in Pippin’s life, including his dysfunctional family, made up of his father, King Charlemagne, played by Armand Procacci, CC ’23, stepmother, Fastrada, played by Jordynn Lurie, SEAS ’20, stepbrother, Lewis, played by Henri Vrod, CC ’21, and exiled grandma, Berthe, played by Jackie Chu, CC ’22, plus widow Catherine played by Morgan Grant, BC ’22, and her son Theo, played by Russell Graviet, CC ’23.

"I'm going to swear—it's like, honestly, a clusterfuck,” Chu said. “I'm in it, and I've read the script, and lived and breathed it for the past few weeks … but I still find there's a new element to it every time we do it. … It's thrilling—the plot is random as hell, no one knows what's actually going on, but it's like the best kind of mess, in my opinion."

Though the 2013 version of the musical is known famously for its circus-centric interpretation, Houdaigui chose a different route, instead opting to place the narrative in 1960s America.

“I went back to the text and I realized so much of it is about the concept of revolution, and war, and this rethinking of what it means to be a modern woman,” Houdaigui said. “And for me, I'm a history major, and I focus on the United States, so I was immediately drawn to the late 1960s period. … I'm not trying to give the most realistic interpretation of the ’60s I'm trying to give a hyper-theatrical version of it … [so] the war that happens to be in our show happens to be set in Vietnam, [and] the idea of common and ordinary life is suburbia and white flight.”

The musical begins with a beckoning call: the Leading Player, poised like a statuette center stage, urging for the audience to “join us, come and waste an hour or two (Doodle-ee-doo!).” The call is the cast breaking the fourth wall, welcoming the audience to take part in the magic to follow—but it’s also been a welcoming for the cast themselves. 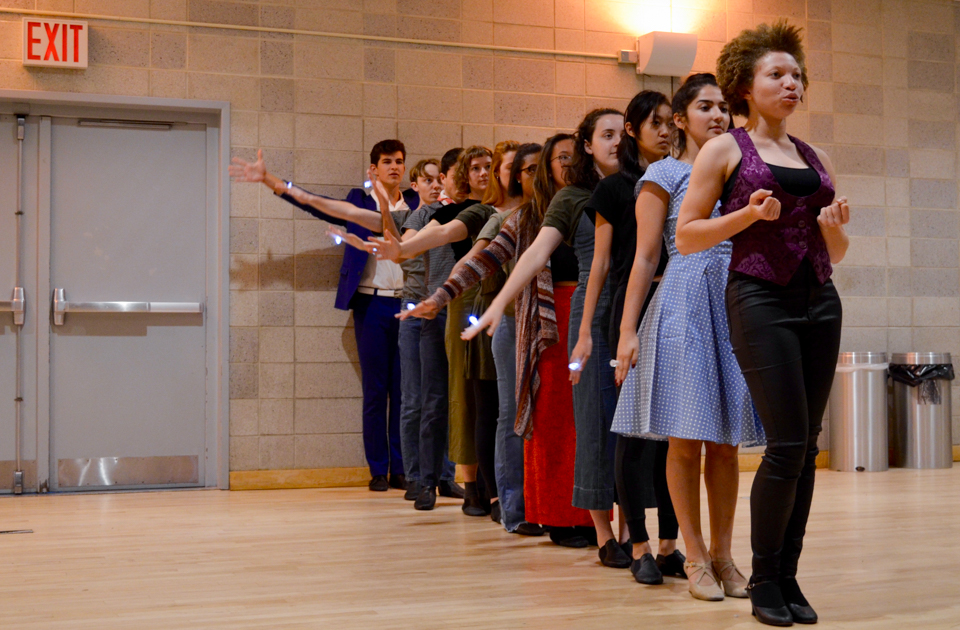 Olivia Fine
When asked about the most fun element of the production, co-producer Sila Puhl said, "Hanging out with [co-producer Sarah Leidich], to be honest. Especially with student theater, it's really easy to get overly heady about it, like this is my vision, and this is art, but it also ends up being, a lot of the time, my social space and so I just have fun. Cracking jokes.” Says Leidich, "Sila's super funny." Says Puhl, "Sarah's super funny."

“I have really appreciated being in this production,” Chu said. “We have so many talented people of color. … They’re just phenomenal people. … It’s so nice to be in an environment where I’m seeing a bit of change. … New faces, fresh faces.”

Pippin himself wears patchwork denim pants, and a mustard jean jacket, his voice as honey-yellow as his coat. He bumbles around the stage somehow gracefully, sometimes even strumming a guitar along with his numbers—a natural lead.

Yet, though of course “Pippin” tells the tale of Pippin, it’s clear that each member of the cast is being utilized to their full potential, whether it be comically, choreographically, charismatically, or in chorus. Yet they all certainly work in tandem, truly becoming a troupe of players.

"I don't think it's about Pippin, I think it's an ensemble show,” Houdaigui said. “There's maybe one moment on stage where Pippin's alone—everyone is always there. … What I've loved about this show is that there's no time to take so many rests, which I do feel a little bad for, but it's made this ensemble and this troupe truly get so close to one another, because the entire point of it is to support one another throughout the show.”

“Pippin” features moments of complex choreography, with fierce tableaus, at a level rarely seen in the Columbia musical theater sphere. The often frantic, yet always fabulous, choreography gives shape to the unstageable—war, sex, and doubt—through the signature Fosse style. Though cast members came to the production with varying levels of dance experience, this disparity is almost invisible to the eye; even with a cast that includes a “So You Think You Can Dance” alum, the production team worked to level the playing field, and keep the ensemble remaining a troupe throughout, always completely cohesive. 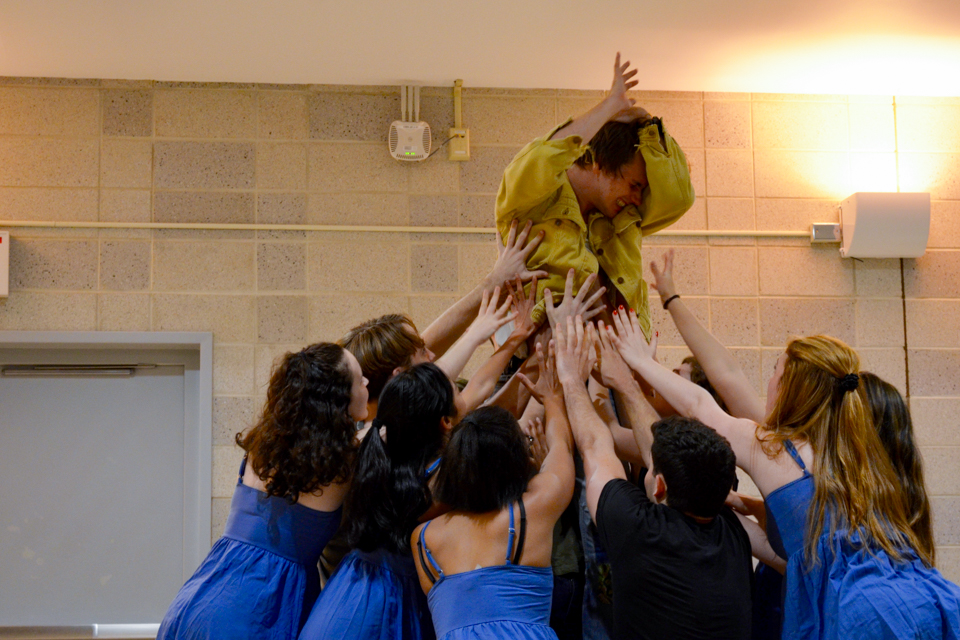 Olivia Fine
“The job of the choreographer is to tell the story of the show through movement,” Sophie Visscher-Lubinizki said. “‘Pippin’ is a unique show because it's so heavily based in dance … [and] the dance numbers are very very long and … they're all really different. And so I think my role as the choreographer was to try and make all those numbers unique and exciting and fun to do, but also to tell the story."

Sophie Visscher-Lubinizki, BC/JTS ’21, as choreographer, worked to navigate this famed style while still letting her own voice emerge through the dances she devised. Of course, the signature Manson Trio remains, true to form—yet in other moments, Visscher-Lubinizki injected disparate genres of dance, including ’60s-esque postmodern, improvisational, and modern styles. She elucidated what defines a Bob Fosse-style dance, which she imbued in “sprinkles” throughout CMTS’ adaptation.

"What makes Fosse Fosse, and from a technical standpoint, is that he kind of reinvented jazz to move away from classical ballet, so everything is done very turned in,” Visscher-Lubinizki said. “Fosse also, how I would describe his style, is initiating movement in different places, so when we do our Fosse walk, the movement of the walk is actually installed from the hip, which is like, a really crazy thing to like, conceptualize … but what I always say, which is terrible, is that if you feel really uncomfortable, you're doing it right.” 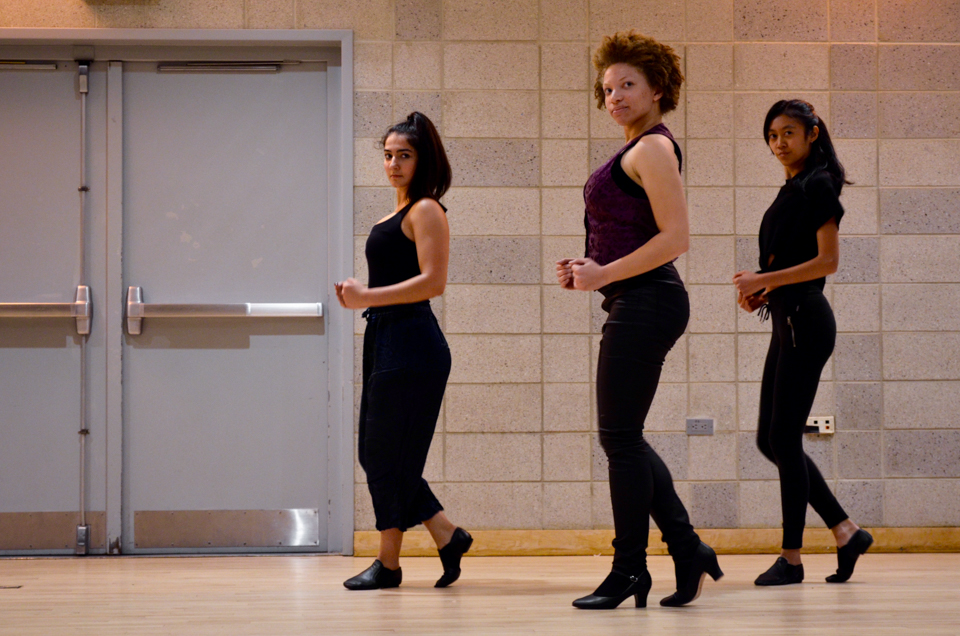 “Pippin” captures a plethora of feelings: what it means to find one’s home, and taking the road less traveled to get there. Continuously, the emotions that permeated the show felt especially tangible, and were certainly relatable, even though spurred from a fantastical tale about a king.

"I think it's really easy on this campus to feel isolated, and also aimless,” Leidich said. “I think ‘Pippin’ answers the question of, you feel special, but how do you enact your specialness, and how do you value yourself before others, so others can value you? It's a show about finding where you belong, which I think a lot of people struggle with on this campus."

With Chu, this sentiment especially resonated, having waited to enter the theater community at the end of her first year, and now a sophomore still finding her footing. Yet, with “Pippin,” she’s finally found her own, perhaps, “corner of the sky.”

“I really just feel like I’ve grown as a person and as an actor,” Chu said. “It’s very competitive in this theater industry, not even just at Columbia, in the world, and you find a lot of the time that you compare yourself to others, and you’re like, ‘Why didn’t I get this role, [or] why did I get this role?’ … I just need to own why I’m here right now, and why I’ve been given this opportunity, and why I was chosen. … This is why it means a lot to me, being in ‘Pippin,’ as well; it’s just like, a part of my life that has been really good, I like to say." 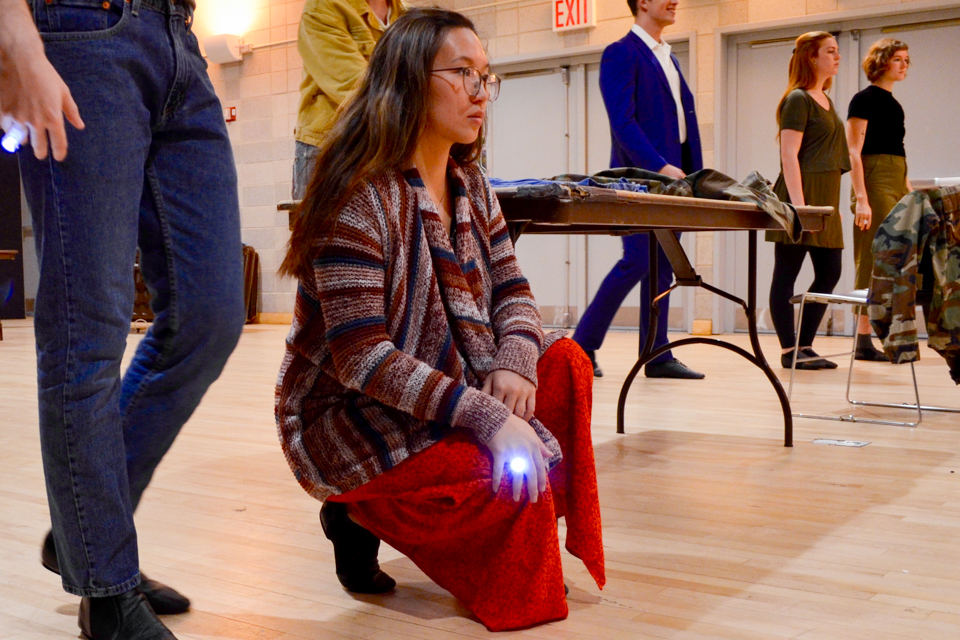 Olivia Fine
"I feel like I'm being challenged as an actor,” Jackie Chu said. “I never thought I was very good at acting—I like to say I'm OK. But I never thought it was my strength. I was like, I'm only being chosen for musicals because I can sing better than I can act. But this process has made me—I'm just like myself on steroids, that's Berthe. … I never thought I was funny, ever, so I've just been allowed to do a lot of random shit that I never thought was acceptable and people are laughing at it which is like, what I want. I like to spark that kind of joy."

And in her solo number, Chu is a beacon on the stage. As she and the cast invite the room to sing a boisterous chorus of her character Berthe’s song, “No Time At All,” it’s impossible to stop oneself from singing along joyfully.

“Oh, it's time to start livin', time to take a little from this world we're given, time to take time, cause spring will turn to fall, in just no time at all...”