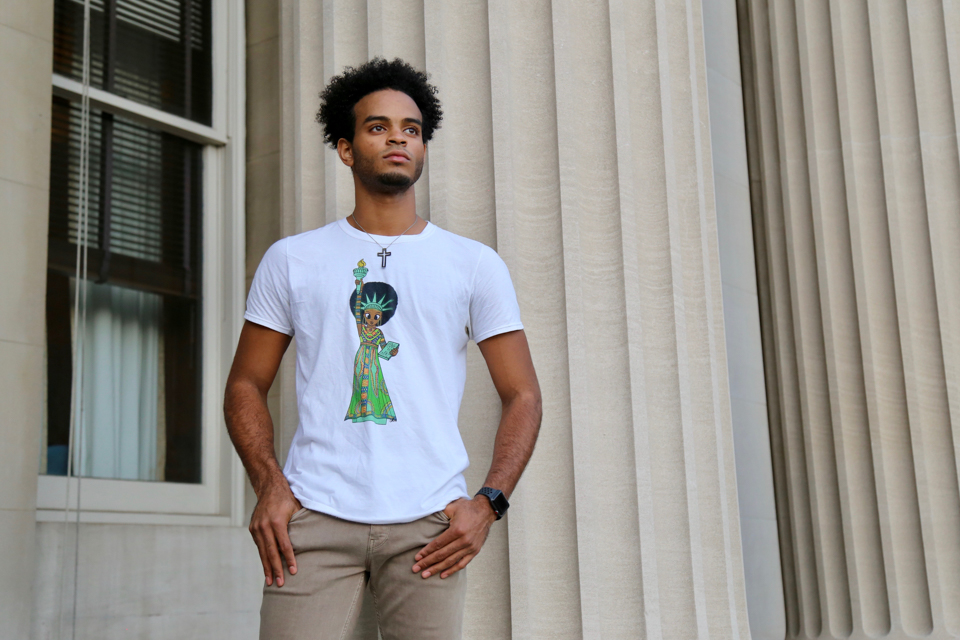 Boyd donates a portion of his profits to charities that empower women of color.

She stands tall, her hands wrapped around her iconic torch and tablet. Her green, dashiki-inspired dress is accompanied by an Afro that peeks out from under her crown; her large hoop earrings cascade down her shoulders.

This take on the Statue of Liberty was the first design used by Addis Boyd, SEAS ’22, for his company, “Sistas of Liberty,” which launched in February 2019.

The idea for the company and its signature designs was sparked by a class project in high school, where one of his classmates depicted the famed New York statue in a way he had never seen before.

“[She] made a model of the Statue of Liberty, ... put an Afro on her, and covered her in hip-hop lyrics. She was kind of explaining this idea in one of the meetings that I was in, and ... I was kind of sitting back, thinking, ‘Wow, this is pretty cool. Why haven’t I seen ... a Statue of Liberty that’s of color?’” Boyd said.

Inspired by his classmate, he sent the idea to his cousin, an illustrator at Northeastern University. Equipped with an array of designs, Boyd launched an initial line of garments by selling them on Etsy during Black History Month.

He likewise took inspiration from his 12-year-old sister, who he hoped to encourage with the visuals.

Boyd started Sistas of Liberty in hopes of creating a platform to inspire and empower women and minority groups. This is especially reflected through the name he chose and the designs featured on his products, which are primarily T-shirts and sweatshirts.

“The word ‘sista’—I’ve heard it since I was little. It’s used a lot in the black community. It’s just another name for women that’s well-respected. It could be your mother, it could be your actual sister, it could be your daughter. … It’s not specifically pertaining to Black people. … Seeing that it could touch different people, I thought it would be a good name to represent our whole company with,” Boyd said.

Since launching his company, Boyd has grown his social media platform to over 2,500 followers, expanding the reach of his designs across Columbia and beyond its gates.

“In this country, especially now, [with] the political climate [and] … divisiveness ... using a symbol that has supposedly always promoted freedom and equality and putting people who you don’t see their face a lot in that figure ... I thought it was important, especially considering the Statue of Liberty is ... important to this country,” Boyd said.

In line with the mission of his designs, Sistas of Liberty also donates 25 percent of its profits to charities that empower women. Being an engineer, Boyd was naturally inclined to the STEM field, so for the Black History Month design, he chose to donate to Black Girls Code, an organization that creates a platform for Black girls to explore science and technology fields.

Boyd also tries to incorporate this sense of diversity within the actual process of designing and sharing his apparel. When working on new designs that feature women with backgrounds that are not his own, Boyd makes it a point to use social media to discover artists who identify with that background, in hopes of having them design it. Including multiple ethnicities is additionally important to Boyd when it comes to modeling his apparel for Instagram campaigns.

Since the first design, Boyd has gone on to create similar versions of the sweatshirts with Desi and Boricua women, clothed in a shalwar kameez and the Puerto Rican flag respectively. Additional iterations include unisex breast cancer awareness versions.

“I understand ... from being a minority in this country, the importance of allyship and allies. I also acknowledge that there is a really thin line between not doing enough and doing too much—overdoing it,” Boyd said. “With this, I’m just trying to do as much as I can to … help the progress of women in this country and empower them as much as they can. [I am] trying to be an ally, but still keeping [a] sort of like a carefulness that I’m not overdoing it or … exploiting it in any way, … because that’s not the intent and ... not what we stand for.”

For Boyd, diversity and representation are not topics that need to weigh individuals down. Instead, they can uplift and inspire anyone who is willing to engage with them.

“If you’re down [to spread our mission], ’cause you should be down—everybody should be down. ... Keep spreading our mission, which I think should be more than our mission. It should be everybody’s mission,” Boyd said, sporting his own bright pink, Black History Month “Sista” sweatshirt and a smile.