In KCST’s “The Bacchae 2.1,” greek mythology is chromatic, melodic, and queer

In KCST’s “The Bacchae 2.1,” greek mythology is chromatic, melodic, and queer 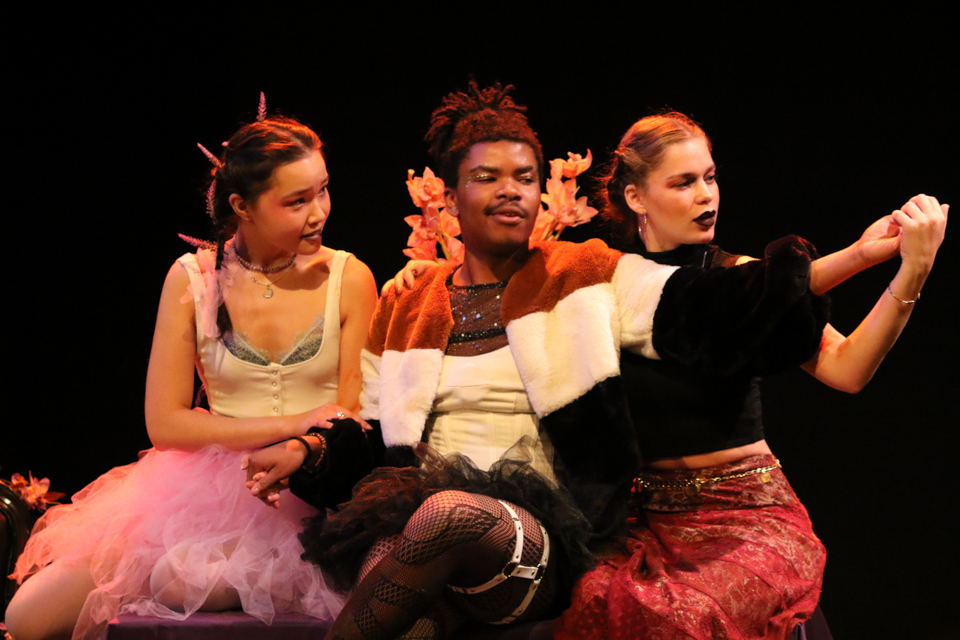 When thinking of Dionysus, one might picture a plump, haughty God, wrapped in vines, perhaps clutching a glass of wine. Enter instead: a tutu, lace-tight, and faux fur-clad gender-fluid being, bewitching and beguiling. This is Charles Mee’s modern Dionysus.

Columbia’s King’s Crown Shakespeare Troupe presented “The Bacchae 2.1” from Oct. 24 to 26 in the Lerner Black Box Theater. “The Bacchae 2.1” was originally written as an adaptation of Euripides’ tragedy by Columbia School of the Arts professor Mee in 1993. Directed by Carolyn Rose Friedman, CC ’21, and produced by Mario Garcia, CC ’21, and Mira Soni, CC ’21, KCST’s production was a sexy, stylish, provocative rendering.

Euripides’ classic Bacchae narrates the Greek myth of King Pentheus of Thebes, and Agave, his mother and leader of the Bacchae, a group of women who live freely on a mountainside. Under the influence of Dionysus, Pentheus ventures to the Bacchae’s sacred home— curious of their behaviors yet intent on their destruction—and is killed unknowingly by his mother in a state of fury.

Mee’s version introduces an avant-garde twist, burgeoning with theatricality: Added to this adaptation are elements of dance, modern colloquialisms, and contemporary LGBTQ themes. Dionysus, played by Kay Kemp, CC ’22, is transformed into an enchanting transgender god, urging Pentheus, played by Kristoff Smith, CC ’22, to demasculinize himself and dress in drag to penetrate the Bacchae’s haven. Pentheus is wary, but eventually complies.

This Bacchae seemed like more than just a story; it was a curated collection of emotions breathed to life. Presented were moments of playful bliss—the Bacchae folding and tossing paper airplanes around the stage, oblivious to an ongoing scene—apposed with scenes of serious solemnity, or moving quietude: Kemp singing hypnotically to Smith as they danced, Ella Fitzgerald’s “Summertime” later breaking the silence.

Additional courtiers equally injected a necessary levity throughout. Tony Ulasewitz, played by Jane Walsh, CC ’23 emerged disheveled, recounting through amusing monologue his encounter with the “women in the mountains.” And the first and second aides, played by MoniQue Rangell-Onwuegbuzia, CC ’22, and Shandin Jones, CC ’20, respectively, were similarly droll, slipping sexual quips between bursts of other characters’ more eloquent speech.

Josie Bourelly, CC ’23, as Agave, was an enticingly captivating leader of the Bacchae, pairing tantalizing femininity, enraged chaos, and despondency. The remainder of the Bacchae roamed inquisitively and fiercely around the space, dancing, telling stories of sexual encounters, and making themselves curiously distinct yet a harmonious ensemble, stunning and sleek.

Most artful were the musical dance moments, which imbued the piece with further complexity, giving dimension to an often plodding plot. Choreographed by Celia Krefter, CC ’22, and set to a vibrant, textured soundscape by head sound curator and sound designer Aja Isabel, CC ’21, dances were performed in a variety of genres—including modern, bhangra, step, and avant-garde—augmenting the poetic nature of the text, strikingly bringing lyrical moments to alluring, seductive life.

In accordance with the show’s overtly artistic adaptation, its aesthetic was expertly arresting. Lighting designer Kelly Fuller, BC ’23, dappled the stage in unexpected multicolor, and the set floor was littered with heaps of florals and vine.

Correspondingly, head designer Lexis Rangell-Onwuegbuzia, CC ’22, painted a blazing autumnal tableau in costume, pairing the bohemian, elegant, and eclectic with savvy. The Bacchae were fitted in accordance with their titles: the Orange Woman, played by Elli Furukawa, BC ’19, wrapped in an apricot-colored tied top, the Lavender Woman, played by Elsa Chung, CC ’23, in a flowing light pink tutu, and the Tattooed Woman, played by Carmin Sherlock, BC ‘21, painted across her face and shoulders with winding swirls and patterns. Continuing in the modern mysticality, Tiresias donned a crisp suit, paired with Birkenstocks and socks.

The show, a brisk 75-minute foray into this Grecian narrative, was short, but the plot managed to be still densely layered. At moments, the piece seemed too textually heavy; interestingly, moments of music and dance were often more poignant and telling than the verbal narrative itself.

It is difficult to discern a moral of “The Bacchae,” be it the modern adaptation or the ancient text. Here, KCST presented a conclusion of glaring despair intertwined with transphobia. However, as director Friedman states in her program note, “This is not a play with neat answers.” The production works despite a pleasant resolution, dually thematically provoking and visually pleasing—and that is certainly enough.