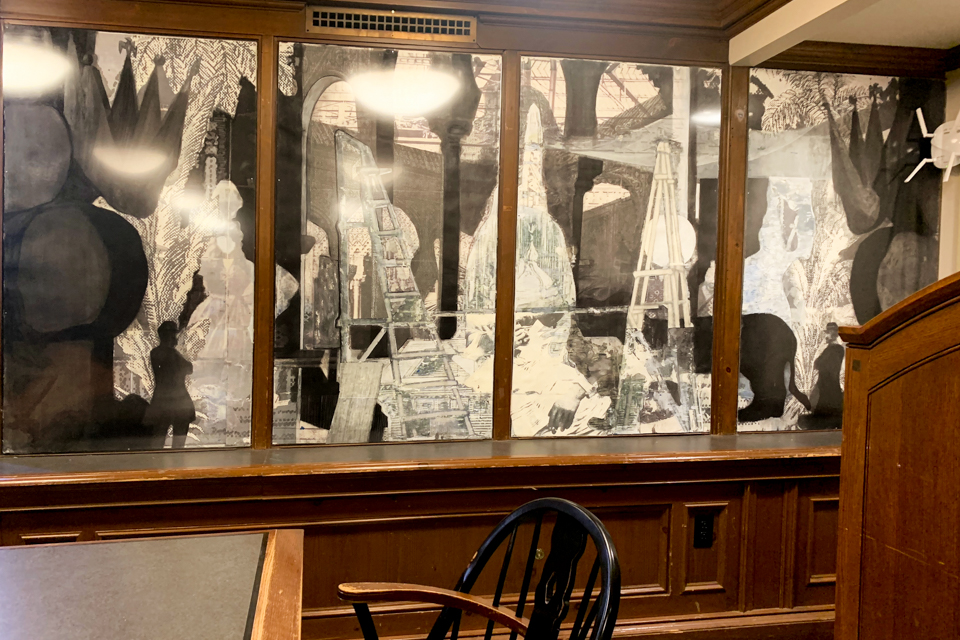 "The Pavilion" replaces the bulletin boards in Butler 211 and 602.

“It’s just one image that gives us all of those complicated questions,” professor Zeynep Çelik said of Baris Gokturk’s “The Pavilion,” a mural created by an MFA student in homage to Çelik’s “Displaying the Orient: Architecture of Islam at Nineteenth Century World’s Fairs.”

Last Wednesday, Butler Library’s “Performing the Library” project hosted a panel discussing “The Pavilion,” which was recently installed in Butler 211 and 602. The panel, aptly titled “The Artist’s Eye, the Historian’s Gaze,” was organized by Librarian for Butler Media, Film Studies, and Performing Arts Nancy Friedland, with support from Columbia University Libraries and the Sakip Sabanci Center for Turkish Studies.

It featured Gokturk, Çelik, and professor Matthew Buckingham, who discussed the complications that arise with the intersection of art and history. The panel was also introduced by Holger Alexander Klein, director of the Sakip Sabanci Center, and was moderated by history professor Tunç Şen.

Friedland introduced the panel, explaining in her opening remarks how Gokturk’s work fit in with the project’s mission.

“I started with the Performing the Library project about three years ago, and the intention was to have students think about how they relate to our collections and information, and it's sort of taken on its own life,” she said.

The connection between Gokturk’s mural and Çelik’s 1992 book, “Displaying the Orient: Architecture of Islam at Nineteenth Century World’s Fairs,” became the focal point of the evening, as Çelik described her reaction to Gokturk’s initial proposal to adapt the work into a mural.

“I was very impressed by the artistic direction of what he wanted to do with my book … He wanted to use it as a bouncing board to ask many, many questions, and the process was fascinating—it got more and more complicated,” Çelik said.

In this artistic reimagining, Gokturk achieved an interpretation that Çelik often felt unable to pursue, constrained by the limits of the historical discipline.

“My discipline does not allow me to intervene in the images themselves, and I felt so imprisoned that way, where Baris was so free. He could play with these images, he could make them say things in ways that I was only allowed to do in words, hence this feeling of envy is very real,” she said.

Given Çelik’s enthusiasm over her book finally receiving an artistic interpretation, she became deeply engrossed in the creative process alongside Gokturk.

“Professor Çelik actually assigned me a series of rare books on the subject, not just the World’s Fairs but the larger subject of Orientalism,” Gokturk said, describing Çelik’s role in his process.

Çelik and Gokturk, a historian and an artist, achieved great camaraderie through this collaborative process. But the relationship between history and art isn’t always straightforward, according to the panelists.

“I think, in terms of hierarchy, art is much above history in its ability to ask open-ended questions,” Çelik said when asked if she perceived a hierarchy between history and art.

Buckingham affirmed Çelik’s view, saying, “The role of an artist is as someone who is deliberately choosing to work with ambiguity and questions over answers … When artworks do that and they're successful, they’re causing new research, they're causing new theories.”

The panelists were very interested in the question of how art and history inform each other—or perhaps limit each other—and each interpreted the issue uniquely.

“I’m learning from Baris a lot and from other artists a lot … I am thinking of ways of activating my images in order to rip them of their neutrality and turn them into living agencies,” Çelik said.

As students spend the year studying in Butler 211 and 602, the mural will serve as a reminder of the value of ambiguity, and may spark new questions among students. Despite complex feelings toward how art and history interact, each panelist agreed on the value of asking questions, and Çelik sees “The Pavilion” as a definitive success in that respect.

“What we got from Baris was a series of question marks, and I think there's a lot to be learned from that,” she said.