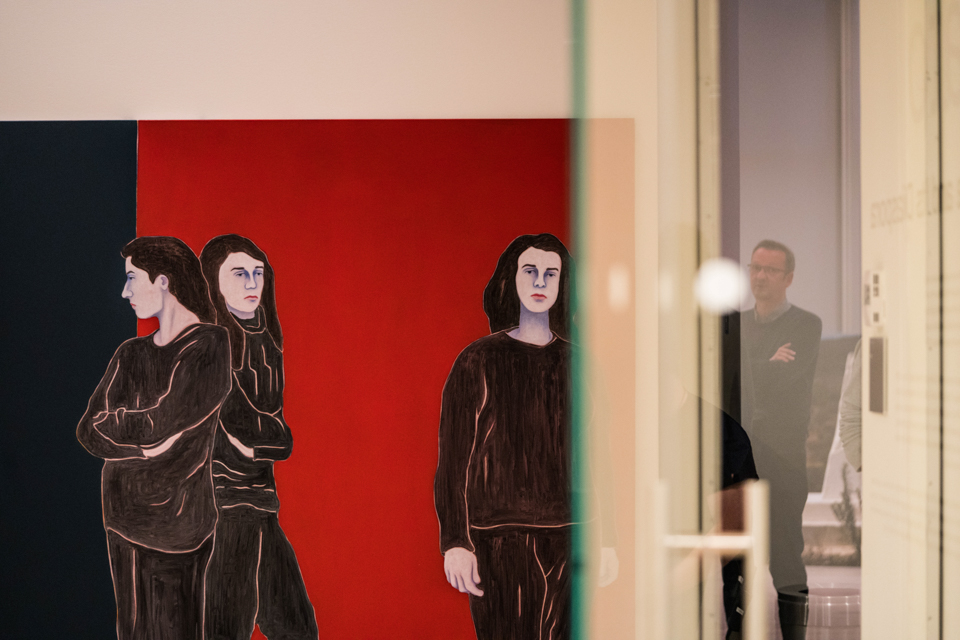 The gazes of three women clothed in brown amid a rich red- and dark blue-painted background greet visitors as they enter the gallery. Vibrant reds and blues of a conflict-inspired poster, photos of Algerian landscapes, and even a pressure cooker and dog collars catch the viewer’s eye as they walk throughout the space, with all of the works of art offering different perspectives of the modern political and cultural state of Algeria.

On Friday, Oct. 25, the Wallach Art Gallery opened its new art exhibition, “Waiting for Omar Gatlato: Contemporary Art from Algeria and its Diaspora,” a survey of contemporary Algerian art addressing themes of memory, decolonization, and freedom. Associate Director of Education and Public Programs Jennifer Mock and Exhibition Curator Natasha Marie Llorens led a Wallach Talks discussion with four of the artists represented in the exhibit on Saturday, Oct. 26.

Llorens, a Ph.D. candidate in modern and contemporary art history at Columbia, drew inspiration from her dissertation on Algerian cinema for her curation of the exhibit. As her father and grandfather were born in Algeria, she noted that she felt a personal connection to the Algerian arts and film scene, sparking the “post-colonial and decolonial questions” that led to her dissertation and idea for the exhibition.

“Algeria’s a gorgeous, fascinating, complex, rich place that brings you into it and doesn’t really let you go, and so I found myself sort of carried along by a series of questions that have become the show,” Llorens said in an interview with Spectator.

Betti-Sue Hertz, director and chief curator of the Wallach Art Gallery, noted during the opening reception that “Waiting for Omar Gatlato” is the first exhibition of its kind that brings together artists living in Algeria and in the Algerian Diaspora, all of whom “feel very connected to the culture.” Hertz, like Llorens, stated that the exhibit teaches viewers about current Algerian perspectives on history and politics that are “practically invisible” within the United States.

“I’m trying to present a polyphony of perspectives,” Llorens said of the exhibition. “The political purpose of that polyphony is to counter any understanding that is monolithic of a place that has a lot of things projected onto it that are monolithic, inside and from outside.”

“Waiting for Omar Gatlato” is also the name of a book by Algerian author Wassyla Tamzali that was inspired by the film “Omar Gatlato” directed by Merzak Allouache. Llorens was inspired by the open-endedness of the title of Tamzali’s book, as well as the reference to Samuel Beckett that reveals a “crossing of legacies” between North Africa and the Western world.

The film “Omar Gatlato,” which tells of a young and lively Algerian man named Omar who lives in a crowded apartment and falls in love with a singer named Selma, was shown at the Lenfest Center for the Arts on Saturday after the artist talk.

Llorens, who did over 100 studio visits with over 25 artists, noted how the exhibition allows for many underrepresented artists who, as she says, “have very little access to the market” to showcase their work and their interpretations of Algerian culture in a meaningful way.

“I think it’s really hard to make this type of show in a commercial context,” Llorens said. “I think the beauty of the Wallach Art Gallery as a space is that it’s really committed not just to shows that have scholarship behind them and are thoughtful in a deep way but also shows that would not be able to exist in a market that needs to sell things.”

In teaching viewers about the complexity of Algeria, artists Amina Menia, Bardi, El Meya, and Adel Bentounsi spoke about the backstory and creative process behind their works in the exhibition.

Menia, who created a series of photographs called “Chrysanthèmes” that focuses on commemoration stelae in Algeria, discussed the idea of public art and memory in a recently decolonized country lacking in democracy.

“In the work, I was showing that the behavior of people with those kind of objects in the city tells us a lot about self-consciousness and the community that doesn’t belong to something that is there,” Menia said. “It reflects the lack of freedom—public spaces are not really free.”

Bardi, who created a diptych called “El Fajr” depicting Bilal ibn Rabah—the first muezzin, meaning the first Muslim to call fellow believers to prayer from a mosque—discussed the symbolism behind features within his paintings that he struggled to depict due to Islamic artistic regulations.

El Meya discussed the significance of water, openness, and accessibility in her painting “Les Èves,” which allegorically depicts seven women engrossed in their own struggles.

After these artists spoke, Khaled Bouzidi, co-founder of the cultural organization Rhizome Culture, discussed how Algeria lacks the necessary public space to showcase art. Bouzidi, who has helped arrange public art festivals like El Medreb that displayed art in places like garages and factories, stated that appropriating public space allows for artists to best express themselves, despite the lack of support artists receive.

“What I see as a problem now … is the institutional support that artists need to have in Algeria, which is something that is not existent at all ...” Bouzidi said. “You cannot create an art community just with a bunch of people, it needs to be multiplied in different disciplines and different regions of the country.”

Yet Bentounsi, who placed Arabic keyboard stickers on a pressure cooker in his work “CV,” noted that art is a way through which people not only share their perspectives of Algerian culture but also present themselves as successful and meaningful; to Bentounsi, who was working with his mother to format a resume when a pressure cooker sounded from his kitchen, an artwork as unassuming as a pressure cooker can reveal one’s history, family background, and self-confidence.

Art like “CV” is “an attempt to try to deal with the media and how to present oneself as talented, good, and successful, someone who has achievements, [to decide] what is the right recipe of that self-presentation,” Bentounsi said, as translated from the French by Llorens.