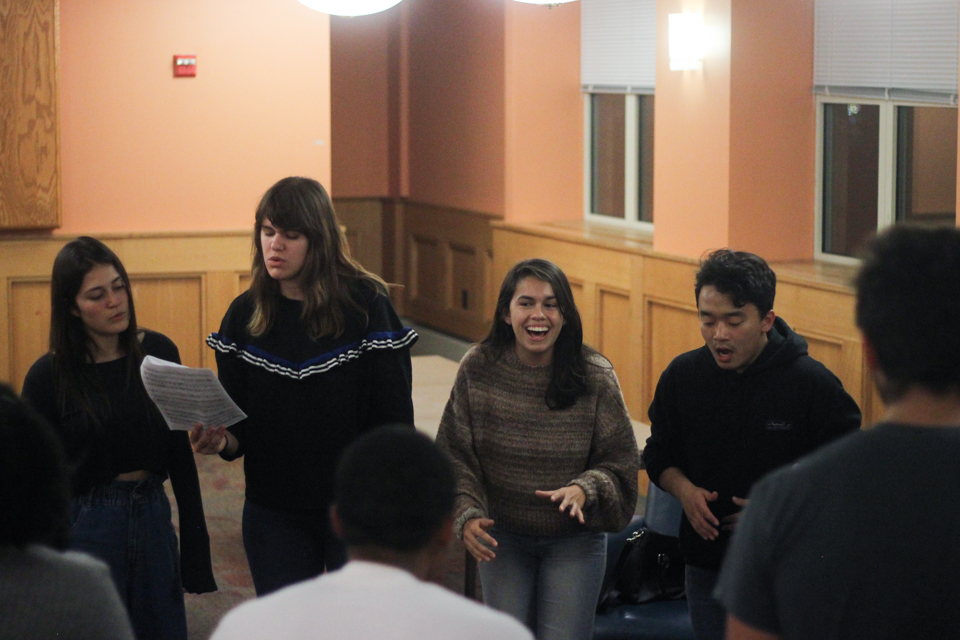 The group is dedicated to connecting with one another on not just a musical level, but a personal one.

On a Sunday night in October, air crisp from an afternoon of rain, the 19 current members of Notes and Keys ventured up to the Broadway Sky Lounge (even the place they rehearse sounds swanky!) for rehearsal.

Every rehearsal opens with a nightly check-in where members provide a brief summary of what has been going on in their respective lives, a testament to the group’s dedication to connect with one another on not just a musical level, but a personal one.

“I made this fire risotto with brussel sprouts and chicken,” Tommy Song, CC ’20, said, detailing his “high” of the day. Other members nod their heads and snap in agreement; collective “mhmms” are shared.

Founded over 100 years ago, Notes and Keys, often abbreviated to NAK, is Columbia’s oldest coed a cappella group. Many know them on campus for their aesthetically pleasing website design, Instagram page full of wholesome content (think surprise wedding proposals, smiling photoshoots in fall leaves, and candid videos of new members finding out they have been accepted), and, of course, for their infamous Twitter exchange and subsequent performance for Lin-Manuel Miranda.

“Hi @notesandkeys_” wrote Miranda from his verified Twitter page back in October of 2017, “I just sent you an email, I’ve got an aca-emergency. (seriously) Hit me back! Thanks.”

Current President Anagha Havildar, BC ’21, recounted meeting and talking with Miranda and how she felt during and after the experience.

“He was just such a humble guy. He had his Grammy, his Emmy, his Tony, right next to his seventh grade awards. It was just really sweet … When he met us, he was really warm and very down to earth,” Havildar said. “He just talked to us for a while about music and everything, which was just crazy. So yeah, that was that entire experience. I was shaking for like a week!”

Recently, Notes and Keys performed at Dockapella, an a cappella-specific music festival in Battery Park City alongside six other premier a cappella groups from northeastern schools. The group also often takes volunteer concerts, such as performing for kids in hospitals.

These accolades certainly do not come without dedication, a desire to chase down gigs, and a rigorous audition process. Havildar provided some insight on what the process of auditioning looks like.

“The audition process is really interesting, because we do have around 120 people that audition for the group, and so it’s definitely a lot of people. It’s a really fun process because it bonds us together … It’s just really nice to be back with everyone,” Havildar said.

However, with a limited number of open spots, and only a few graduating seniors each year, Notes and Keys has to make a significant number of cuts of the auditionees they see.

“We hear really amazing singers, and it’s a really melancholy process because we get amazing people, and we love our newbies so much, but then it’s also really sad because there are so many people who auditioned for us who are insanely talented,” Havildar said.

When it comes to obtaining and organizing performance gigs, most of the responsibility falls on the shoulders of Arman Azad, CC ’20, Notes and Keys’ business manager. Most of the time, organizations or individuals will simply reach out to Notes and Keys through the email address advertised on their website or through social media platforms. Azad, who wears many hats at Notes and Keys, is also the main contributor to the group’s social media page.

Havildar attested to the authentic vibe that Notes and Keys strives to curate on their social media platforms.

"Azad is also really good with videography. He'll just bring his camera, and take videos of candid moments that we have. He's just really good at putting everything together. On our social media, it's just kind of moments that look into us as a group. For example, our acceptance video, that was him just going around with his camera, and we were all just bursting with joy, so excited getting our newbies,” Havildar said.

Coming back to the Broadway Sky Lounge on Sunday night, Notes and Keys’ rehearsal began to progress into a series of vocal warmups, but the relaxed and conversational atmosphere persisted. Bouts of uncontrollable laughter were mixed into the sound of members singing “Bidi-bidi-bidi-bidi-bee-ee-yee” in unison.

However, once they began to rehearse their material in earnest, the casual vibe melted away, and though they were still clearly having fun, the room transformed. The Broadway Sky Lounge was no longer a hangout of friends sharing stories; it was now a full-fledged performance space.

As they rehearsed their rendition of Shawn Mendes’ “Lost in Japan,” members danced around each other, some fanning the soloist as he sang and seamlessly executed particularly challenging vocal runs. Even after the song ended, the energy of the moment still remained. Members ran up to one another and hugged, the excitement and support for each other very much present in the air. Notes and Keys’ ability to rapidly transition from friend group and therapy circle to professional performers is especially unique.

This palpable and exuberant energy present in the room linked back to something Havildar mentioned in her interview with Spectator just a few days prior.

"Sometimes we'll just turn the lights off in a song, and I literally feel like I'm being hugged by everyone's voice, and we'll just feel the music together, and it's just really beautiful. It's just one of the greatest feelings ever,” Havildar said.

When asked to reflect on the most special part of Notes and Keys, Tommy Song, CC ’20, responded without hesitation:

"Our music fuels our bond, and our bond fuels our music."