Showman’s, Harlem’s longest-standing jazz club, serves up cocktails with a side of history

Showman’s, Harlem’s longest-standing jazz club, serves up cocktails with a side of history 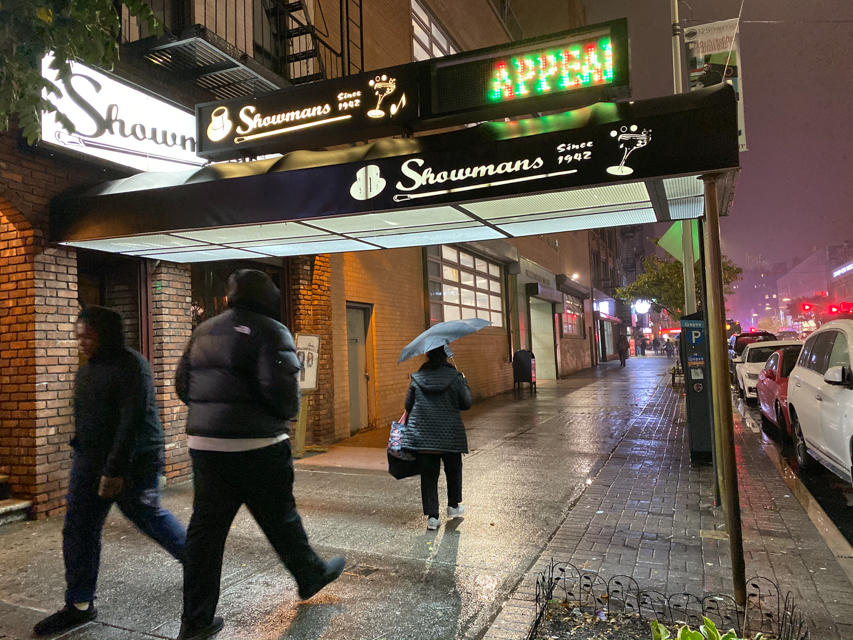 Showman’s is located one train stop and a 10-minute walk from Columbia’s campus.

Live jazz, classy cocktails, complimentary hors d’oeuvres, and portraits of music legends on the walls—if you want to transport into a different era, Showman’s Jazz Club is the place for you. The old-fashioned style bar, located in Harlem, is known for its cozy, homey vibe and rich African-American history.

Showman’s is located on 125th Street and Morningside Avenue, one train stop and a 10-minute walk from Columbia’s campus. The club is open to people ages 18 and over and serves drinks to customers 21 and over. Showman’s has live jazz performances on Wednesday, Friday, and Saturday nights, and while there is no cover charge for the club, there is a two-drink limit with a set price of about $7 per drink.

Showman’s prides itself on its communal and familial aspects. It was designed to serve as a social spot. Locals and tourists of all ages will spend hours there, listening to jazz and getting lost in conversation with one another.

Showman’s opened in 1942. Its original location was next to the Apollo Theater, on 125th Street and Frederick Douglass Boulevard. It was moved to Eighth Avenue in 1985 due to a fire that forced it to relocate. When a shopping mall began construction in that spot in 1996, Showman’s was forced to relocate a third time to its most current location; the move was completed in 1999.

In its original location, Showman’s was a hotspot for jazz artists performing at the Apollo. Iconic musicians, vocalists, and dancers such as Billie Holiday, Eartha Kitt, and LeRoy Myers would perform at Showman’s during the breaks between their sets at the Apollo.

“These artists would go hang out with the locals so they could engage with the community and then stay for their buddies’ shows,” said Brian Preston, a long time Showman’s attendee. “The amount of iconic performances was endless.”

The club has been run by Mona Lopez and Al Howard for the past 38 years. Howard is publicly known for helping save Martin Luther King Jr.’s life when he was stabbed with a letter opener in 1958. Howard, part of the New York Police Department at the time, told King not to sneeze or speak when he noticed the letter opener near his heart. This small but incredibly influential statement was later recognized by King, who claimed that had he sneezed, he would be dead. Tributes to Howard are hung all over Showman’s walls.

Not only does Showman’s history and Harlem roots contribute to its appeal, but the club also prides itself on bringing people together through the power of jazz. One poster on Showman’s back wall states, “Our local history creates a global impact.”

“There was a group of about 40 students on a field trip from a school in England here today,” Preston said. “Music is a good way to teach people’s history and background. Music is universal in that way, it has the power to bond groups of people that wouldn’t interact otherwise.”

While other jazz clubs in the area have been bought out and changed into new developments, Showman’s still stands. Lenox Lounge, a legendary jazz lounge where performances from Miles Davis and other iconic musicians once took place, has been shut down and turned into a Wells Fargo Bank. Since the closing of Lenox Lounge, Showman’s is the longest standing jazz club in Harlem.

When Lopez and Carr were questioned about the gentrification of Harlem and the impact it has on the neighborhood—and Showman’s in particular—they emphasized the value of keeping certain aspects of the community untouched.

“Gentrification should not take Showman’s away from us. It’s very important to preserve its history and maintain its aesthetic,” Lopez said.

Apart from the tension they see arising from Columbia’s expansion into Harlem, Lopez and Carr expressed their desire to welcome all students and staff of Columbia to become part of the Showman’s family.

“We do not mind Columbia’s expansion; however, it is vital that Harlem’s diversity and culture stay alive,” Carr said. “We want to be included in the progress, not thrown aside.”

They expressed that they are even open to having Columbia jazz ensembles perform there in the future. Perhaps a collaboration can serve as an opportunity to strengthen Columbia’s relationship with Harlem and further integrate the two communities.

“We are always searching for new talent,” Carr said. “And we welcome the youth with open arms to engage in our community.”