Little Senegal: a home for West African food and culture in Harlem

Little Senegal: a home for West African food and culture in Harlem 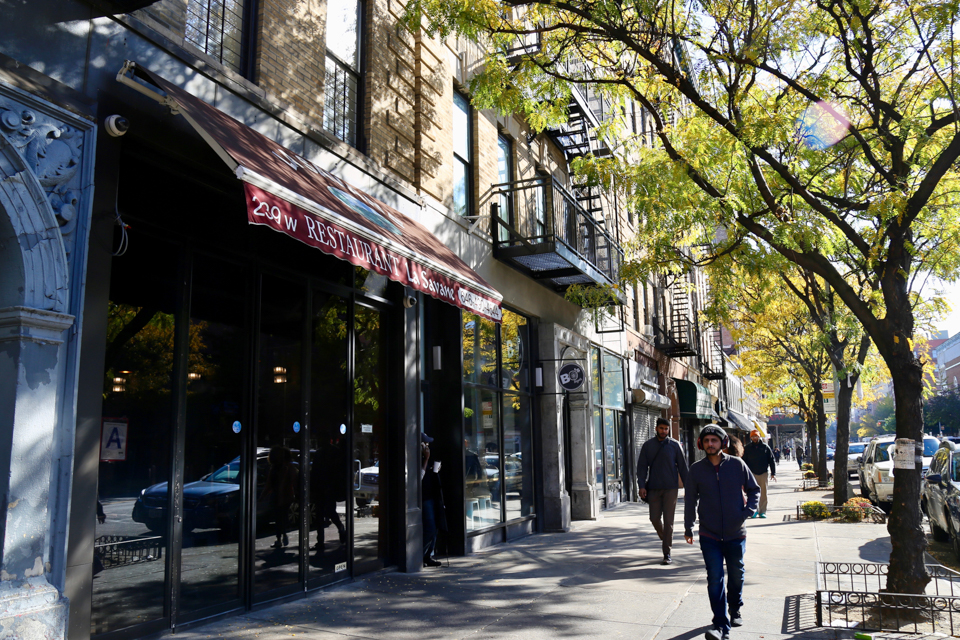 Shop signs written in both English and French, men and women dressed in traditional boubou garments, chefs cooking up fish stew while chatting with customers in Wolof—one is reminded of Dakar, the capital of Senegal. Yet, Little Senegal brings this scene to New York City, just two blocks east of Morningside Park on West 116th Street.

While many African Americans came to Harlem during the Great Migration in the early 1900s, West African immigrants from Senegal, Côte d’Ivoire, Mali, and Burkina Faso came to Harlem around three decades ago to find work, affordable housing, and a better life. Soon after, Little Senegal became a vibrant center for fashion, commerce, and food.

Responsible for defending socio-cultural and traditional Senegalese values and assisting in the economic developments of the Senegalese community, the Senegalese Association in the United States of America began in 1989 at the height of West African migration into Harlem. The association also holds community engagement events, in addition to promoting local West African shops and restaurants. Spectator explored the food options this neighborhood has to offer.

Adja Khady Market offers one a glimpse into the West African culinary scene. It specializes in Senegalese food imports as well as products from neighboring countries like Sierra Leone. Adja Khady, an international food wholesaler, packages many of its own goods like peanut powder, millet, baobab fruit, and specialty products like sumbala and fermented néré seeds.

In addition to selling Halal meats and fish, the market has refrigerators packed with everything from dried fish wrapped in plastic bags to attiéké to granulated fermented cassava pulp popular in Côte d’Ivoire.

Attiéké is a popular dish at the nearby restaurant La Savane, which specializes in Ivorian cuisine. Known for its fish and hearty stews, La Savane elevates dishes like Garba; attiéké served with tuna; and jollof rice, rice prepared with tomato paste, onions, and pepper that are typically served by street stalls in the capital, Yamoussoukro. Additionally, La Savane offers poultry dishes like dibi poulet, a grilled chicken dish served with a spicy tomato-onion medley, and pintade grillee, which is grilled guinea fowl.

La Savane also offers stews served with rice; fufu, made out of plantains and cassava; palm nuts; or placali, cassava dough cooked in hot water. Ingredients like okra, cow foot, and potato leaves are common in La Savane’s stews, which are often prepared for hours.

Pikine serves a Senegalese version of dibi poulet and pintade with grilled onions and peanut oil. Additionally, Pikine draws from North African cooking for dishes like lemchenk, roasted lamb served with onions. Red snapper and tilapia with broken rice are also specialties of the restaurant.

Little Senegal doesn’t just offer West African fare; Safari Restaurant, which states that it is the only Somali restaurant in New York, offers cuisine from East Africa. While Senegalese cuisine is influenced by North African, French, and Portuguese cuisines, Somali cuisine, according to Safari’s website, has “roots across Italy, India, and Arab countries.”

Owned by Mona Birjeeb, who was born in the Somali port city of Kismaayo, Safari specializes in meat dishes like hilib ari, roasted goat served alongside rice, and Somalian bizbaz sauce made with lime and yogurt. Mango curry chicken with berbere spice mix and chicken suqaar prepared with Somali hot sauce are served with either rice or sabaayad, Somali flatbread similar to Indian naan.

Although it has slowly been shrinking due to increasing rent prices and migration of Senegalese residents out of the area, Little Senegal still offers locals and tourists alike a taste of West Africa—the spice, tanginess, and sweetness found almost 4,000 miles away.