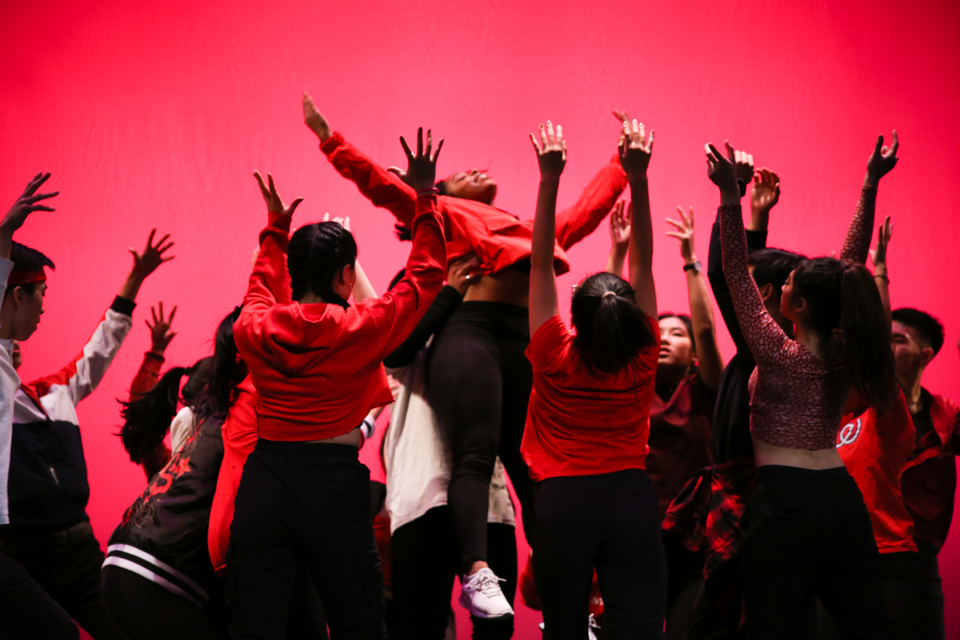 The annual showcase explored the theme of "resurgence" in this year's charity fundraiser.

Models wearing vibrant pieces that display cultural influences walk down the runway, performance groups move swiftly as one, and a poet captivates the audience under the spotlights of Roone Arledge Auditorium.

This past Friday, Columbia’s Asian American Alliance hosted one of its largest annual events: cultureSHOCK. The charity showcase’s theme was “Resurge” and raised over $3,000 in ticket sales with all proceeds going to CAAAV Organizing Asian Communities, a pan-Asian non-profit located in New York City “that works to build the power of low-income Asian immigrants and refugees,” according to the organization’s website.

cultureSHOCK provides a platform for students, artists, performance groups, and neighborhood residents to commemorate the extensive talent and empowerment of Asian Americans. The event’s directors, Luola Chen, BC ’22, Uyen “T” Dinh, BC ’22, and David Wang, CC ’22, chose the theme “Resurge” to honor the sacrifices that have been made by the Asian-American community, reiterate the importance of well-being, and continue empowering one another as society progresses.

The Asian American Alliance strives to provide an educational and nurturing environment for students while promoting conversation and discourse. In addition to cultureSHOCK, AAA hosts an annual high school leadership conference centered around the exploration of what it means to be an Asian American today.

Organizers also highlighted how the event was symbolic of AAA’s own “resurgence,” especially after the club drew national attention in light of the performance of last year’s featured guest, comedian Nimesh Patel.

“This past year has been tumultuous, not only within AAA and [the] Columbia community but also in our country at large. … We have witnessed AAA in a process of recharging this year. Not only were we tasked with dealing with the aftermath of the Nimesh Patel incident, but we also took on the responsibility of restructuring our organization,” the directors said in their notes.

In preparation for cultureSHOCK, AAA worked with a range of designers to showcase both the designers’ and the co-directors’ visions for the event. These designers constructed garments that integrated streetwear with traditional Asian culture: a black leather jacket decorated with white Chinese symbols, cargo pants with pockets made with silky textiles, and classic white tees stamped with graphics of Asian art, to name a few. Each piece, carefully crafted, displayed a visual integration of the designers’ respective cultures and contemporary fashion today.

“Through the fashion show, we demonstrate tangible products of what it means to perform self-care. At the same time, our spotlight models and performers illustrate how self-care can be intangible and abstract,” the directors’ notes said.

Between designers’ sections of the fashion show, spotlight videos highlighted models who shared their stories about culture’s role in their lives. Many explained how they have come to appreciate their Asian-American identity in today’s society. They also spoke about their personal definitions of “resurgence” in today’s society.

To close out the night, AAA invited Koo to deliver a reading of his works. Born in New York City, Koo currently serves as the founder and executive director of Brooklyn Poets and created the Bridge, an online network for poets and mentors.

During his reading, Koo read his poems “A Natural History,” and “Model Minority.” He also performed a new piece focusing on the discrimination of Asian-American men and the issue of interracial sexuality through Koo’s eyes, specifically the lack of media portrayal of relationships between Asian-American men and Caucasian women.

The poem highlighted Koo’s own struggles as an Asian-American man living in New York and his inability to connect with non-Asian women on a dating app. While this poem’s problem relates specifically to Koo, his other poems reflect on the lack of representation and subtle racism that Asian Americans face.

“This last [poem] I’m going to read—it’s a long work, it’s a new work, it’s particularly about the plight of the Asian-American man and the American cultural imagination. How you’re emasculated or completely erased. This is a particular problem I would say in the literary world, where people don’t even seem to notice that we’re not represented and I want to thank Luola in particular for making me feel seen,” Koo explained, before he closed the night with a final poem, hearty laughs and applause filled the room.