Theater of War Productions presents Sophocles’ ‘Ajax’ at Miller Theatre, wrestles with impact of war through dialogue across campus and across time

Theater of War Productions presents Sophocles’ ‘Ajax’ at Miller Theatre, wrestles with impact of war through dialogue across campus and across time 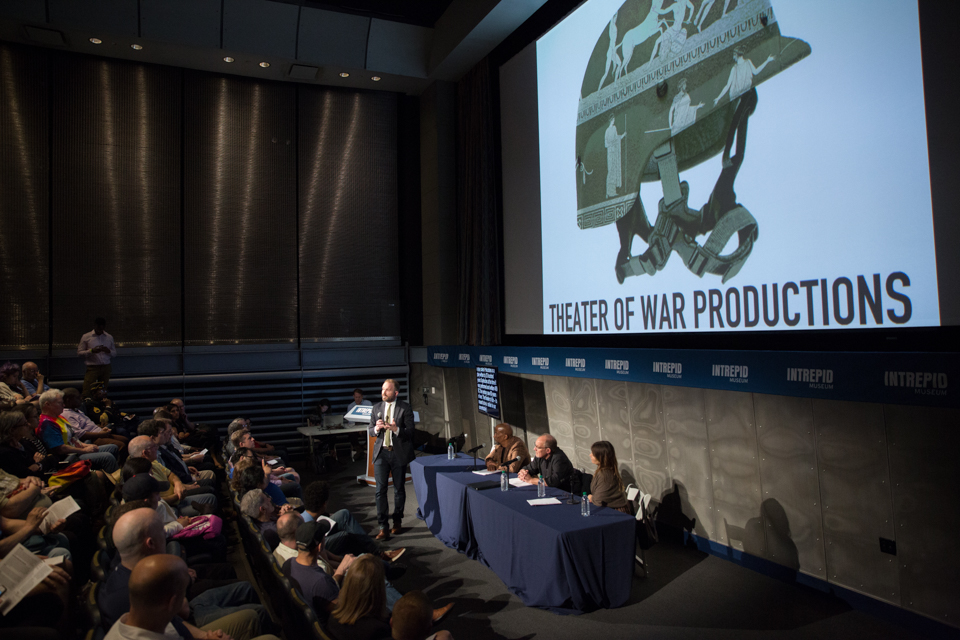 The reading of 'Ajax' was followed by a poignant discussion with audience members who shared their own veteran experiences.

In lieu of a set and props, the horror of the scene is painted on Tecmessa’s face. Her husband, the warrior Ajax, is reeling from the death of his friend Achilles in the Trojan War. To add insult to injury, the army’s generals have passed him over for the honor of receiving Achilles’ armor. When his rage and grief drive him to despair, Ajax falls on his sword. After lamenting over his mangled body, Tecmessa turns to the audience, asking, “Who will lift him?” Her shift in focus is apt. The real play, after all, is in the audience.

Theater of War Productions presented a staged reading of scenes from Sophocles’ “Ajax,” reenvisioned by Artistic Director Bryan Doerries, at Miller Theatre on Thursday evening. More than a production company, Theater of War Productions is “an innovative public health project” that presents dramatic readings of seminal plays which grapple with contemporary social challenges, according to the event program. The readings are followed by guided discussions that invite audience members to share their perspectives on the play’s themes, which aim to foster empathy and understanding of complex issues.

“Ajax” wrestles with challenges faced by service members, veterans, their families, and people in their communities. Glenn Davis, who appeared on Broadway in “Bengal Tiger at the Baghdad Zoo,” read the role of Ajax, giving explosive voice to the warrior’s infernal rage and grief, as well as his sputtering sense of identity. Marjolaine Goldsmith, an actress and company manager at Theater of War Productions, brought clear-eyed urgency to the role of Tecmessa, who fights relentlessly to save her husband from himself. Rounding out the cast, Chinaza Uche, who recently appeared in “Sugar In Our Wounds” at Manhattan Theatre Club, gave voice to Ajax’s soldiers, who left him alone to cope with war’s invisible wounds.

Following the reading, Doerries invited a panel of Columbia community members to share their reactions to the play and moderated the dialogue that followed. Hillary Scudder, a veteran who works for Columbia’s Counseling and Psychological Services and whose work has focused on issues related to military service, recalled the moment that a fevered Ajax sets out to murder the generals who disgraced his honor. When Athena whisks away the generals, Ajax instead slaughters a field of animals and—in his tumultuous psychological state—believes he has killed the generals.

In the aftermath of the mad slaughter, Ajax struggles to come to terms with what he has done. Scudder related Ajax’s experience to veterans’ struggles to reckon with what happened in war, while their mindset was altered by the conditions of combat.

“I think what people often forget is for soldiers who are deployed, oftentimes there are overwhelming emotions, and logic and reason go out the window … and somebody can engage in a way they normally wouldn’t have that would not be in line with their morals or their own values,” Scudder said.

A Navy veteran in the audience concurred that Sophocles’ play traversed the soldier’s mind, and he saw his own story reflected in the protagonist’s.

“I went through everything that [Ajax] went through in the story. [The play is] just trying to show you the soldier’s mind and how it works,” he said.

Another audience member, who served in the Marine Corps, recognized a failure on the part of Ajax’s soldiers to empathize with the warrior. Instead, they left him alone to succumb to the hellish havoc in his head.

“[Ajax’s soldiers] were complicit, perhaps in his demise, with the repudiation of Ajax, who seemed to no longer espouse the traits of a proper soldier. … Maybe we should hold back our immediate disapproval while the person can still be saved, because it wasn’t technically too late for [Ajax],” he said.

It was Ajax’s isolation, another audience member agreed, that led him to think that “all he can do is seek community in those below.”

For veterans’ families, it can be difficult to traverse the distance forged by war between themselves and their loved ones. An audience member whose father was a veteran spoke about the devastating impact that war had on her family.

“War destroys families, that’s what I find. It destroys everyone. … [Today] I see an empire that is crumbling, and so, like all empires that crumble, they spend their money on war and destruction. I honor anyone who serves, but it just takes too much of a toll on everyone, and especially on the soldiers,” she said.

For some Columbia students, the staged reading and discussion illuminated new dimensions of the Greek epics they read in Literature Humanities. One Columbia College student in the audience reflected on how Theater of War Productions breathed life into the classic war stories, which can be gory, monotonous, and impersonal at times.

“In my experience reading [the classics], especially the Iliad, there’s a very distinct feeling of separation from humanity … and I think [the staged reading] felt very personal. It felt very human. And so I think it’s extremely humanizing,” she said.

Perhaps more Columbia College students would grasp the humanity in the war epics if there were more people in their classrooms who could speak to personal experiences with war. Although Columbia’s School of General Studies has more veteran students than the rest of the Ivy League combined, panelist Aaron Stout, GS ’20 and a veteran, noted the divide between these students and others, particularly in Core classrooms.

“In GS, we pride ourselves on the fact that we are fully integrated with CC … [but] I took Lit Hum, and our section for that was specifically for GS. And I think that with the things that we were reading and talking about … we should further move to fully integrate [the schools,” Stout said.

Panelist Jennifer Cardenas, spouse of a veteran and GS ’20, encouraged other students to connect with veteran students, not just in conversation about Lit Hum readings, but informally in the classroom and around campus.

“One thing that I've noticed for GS is … there’s a weird vibe about veterans, so people don’t really talk to them. I would suggest, just reach out [to veterans]. Have a conversation with them. They’re pretty cool,” Cardenas said.

Just as the brawny Ajax often struggles to find the words to relay his thoughts in the Greek classics, words fail to capture the scope of Theater of War Productions’s work. Still, Doerries suggested a takeaway from the expansive and often emotional dialogue.